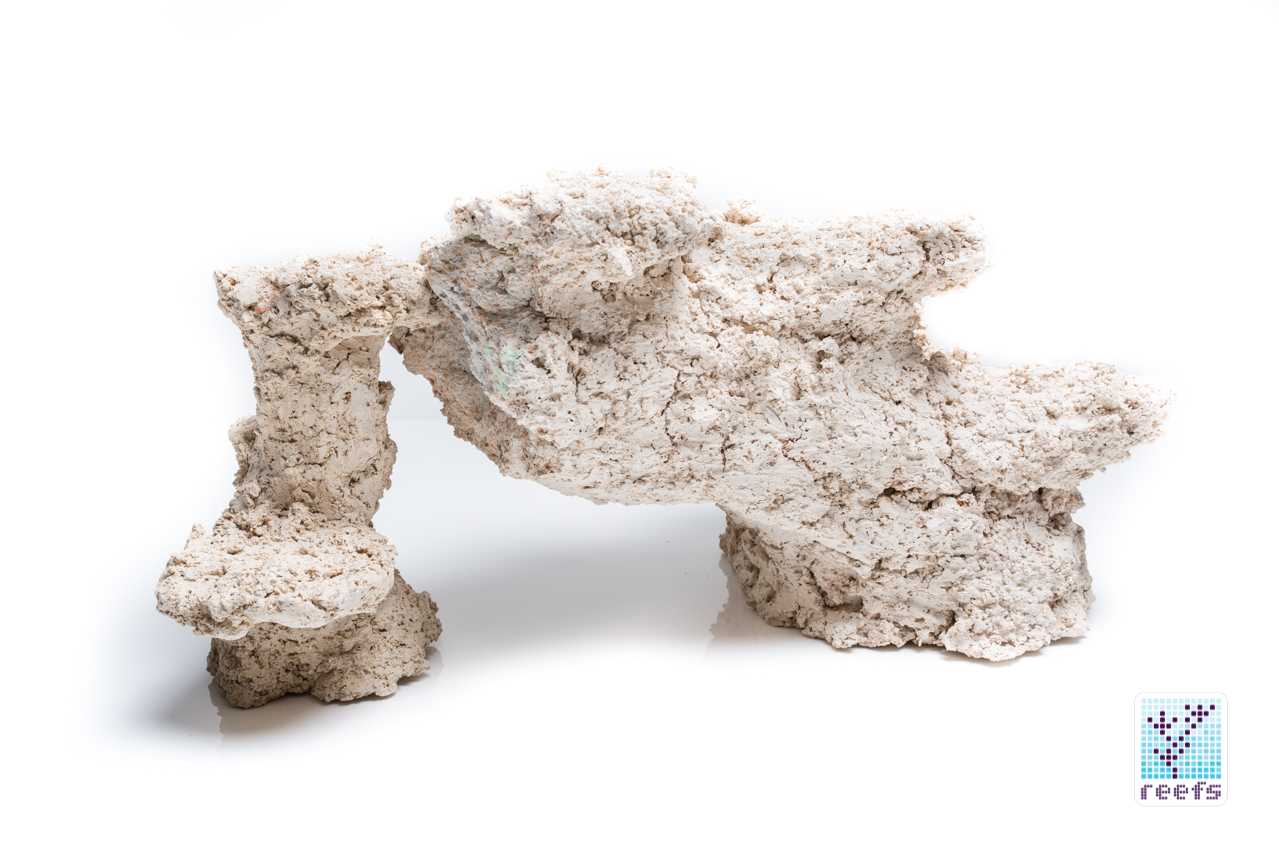 For saltwater aquarium hobbyists, sustainability has always been and still remains one of the top goals. To that end, there has been a recent surge in demand for dry rock, used in newly-setup tanks instead of live rock taken from the reef. The benefits of starting a new aquarium with rock that has never seen saltwater, or, in the case of quarried rock, hasn’t seen saltwater in millions of years, far outweigh the negatives. The only disadvantage dry rock has is that it’s devoid of life and therefore unable to act, albeit only initially, as an active biological filter. This can be remedied quickly by adding a small amount of “seed” live rock from an established aquarium and letting nature do its thing, or by adding commercially-available bacteria strains designed to help start the cycling process in a new tank. Live rock, on the other hand, has only one positive aspect to it, in my opinion- it comes loaded with beneficial microorganisms taken straight from the reef. Unfortunately, it can also turn out to be a Pandora’s Box, as parasites, pests, and other unwanted animals can hide in its porous structure, but even worse than that, it’s harvested from the ocean, which strikes against the efforts to move the aquarium hobby towards sustainability and self-sufficiency.

Dry rock for aquarium use generally comes from quarries dug in areas where ancient reefs once stood. Heavy machinery is used to extract coral boulders, which are then chopped up into smaller pieces and thoroughly cleaned before they are sold to retailers. There are, however, a few companies that take a different route, and make their rocks from scratch. Various methods of achieving a natural-looking manmade rock are used, from DIY Portland cement and aragonite sand recipes to commercially made blends of ceramic media. The end product is always the same- an artificial reef rock that aims to mimic the look and properties of the real thing, but without the numerous drawbacks that the real thing may possess.

Not all manmade reef rocks are created equal. Some deliver on the looks but lack in porosity, which limits their ability to provide adequate biological filtration, while others have similar properties to natural dry rock, look “plasticky” and out of place in what should resemble a slice of a real coral reef. PM Ceramic, the Swiss company co-founded by Mirco Heule, addresses and eliminates both issues with a dry rock that looks good and provides just as much space for beneficial bacteria to grow as any rock taken from a coral reef. 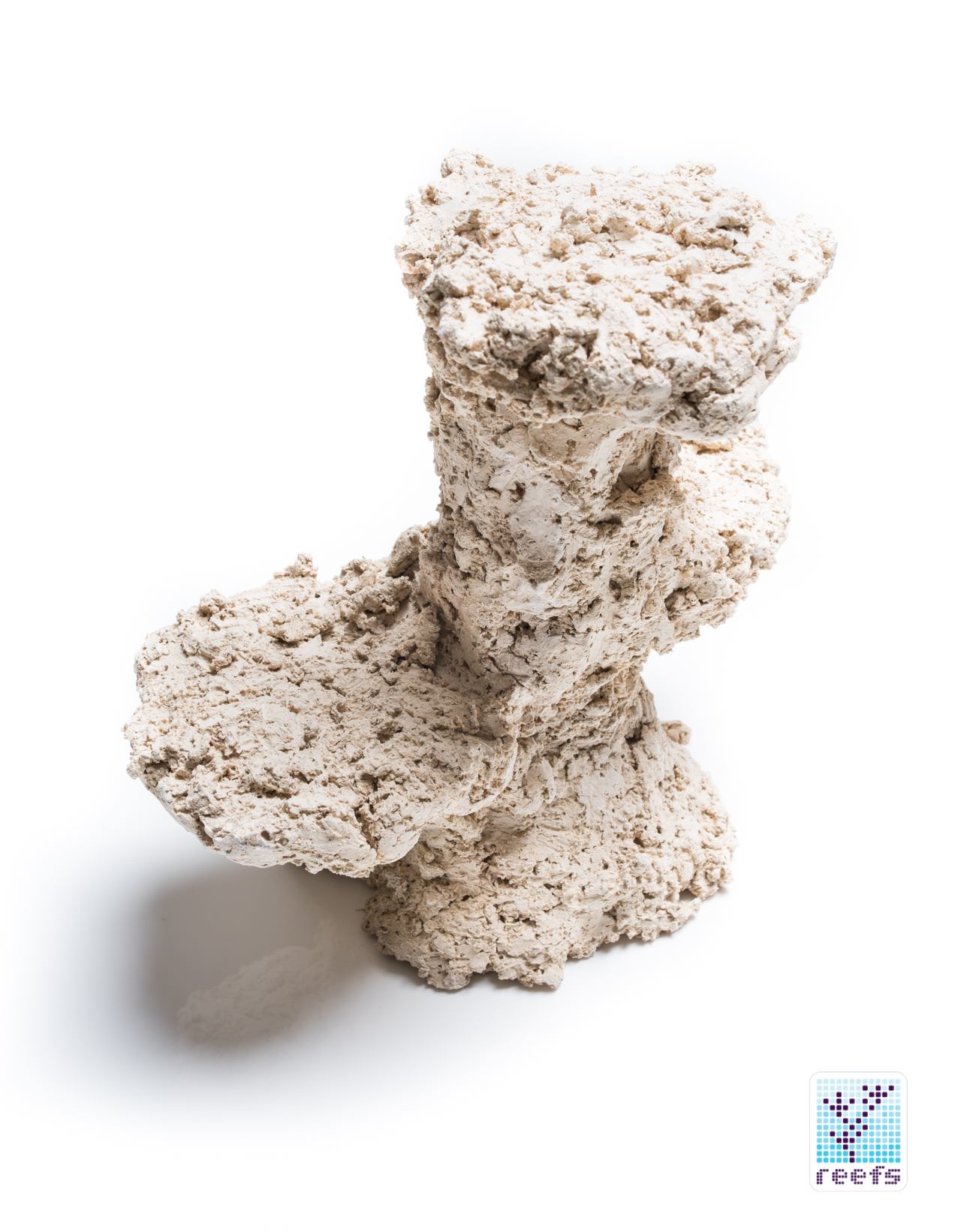 Before we get to the actual rock formations, let’s start with their composition. PM Reef Ceramic is, as its name implies, a uniform ceramic media blend sculpted into various shapes and sizes. According to the manufacturer, it is formed, air dried and then fired in a kiln oven at 1300 degrees Celsius (around 2400 F). The exact mixture of ingredients and manufacturing processes are company secrets, but from the outside, PM rock looks like natural dry rock, broken into tiny pieces and mixed with identically colored, porous cement. No phosphate compounds are present in RC and therefore none are leached to the tank later. I’m fond of PM Ceramic’s color, which mimics natural rock’s hue and structure very accurately. It’s quite dense and heavy; when handled it resembles Tonga Kaelini live rock. Individual pieces are hard to break and when chiseled into smaller fragments, the internal structure has the same density and composition. Take a look at some close up pictures: 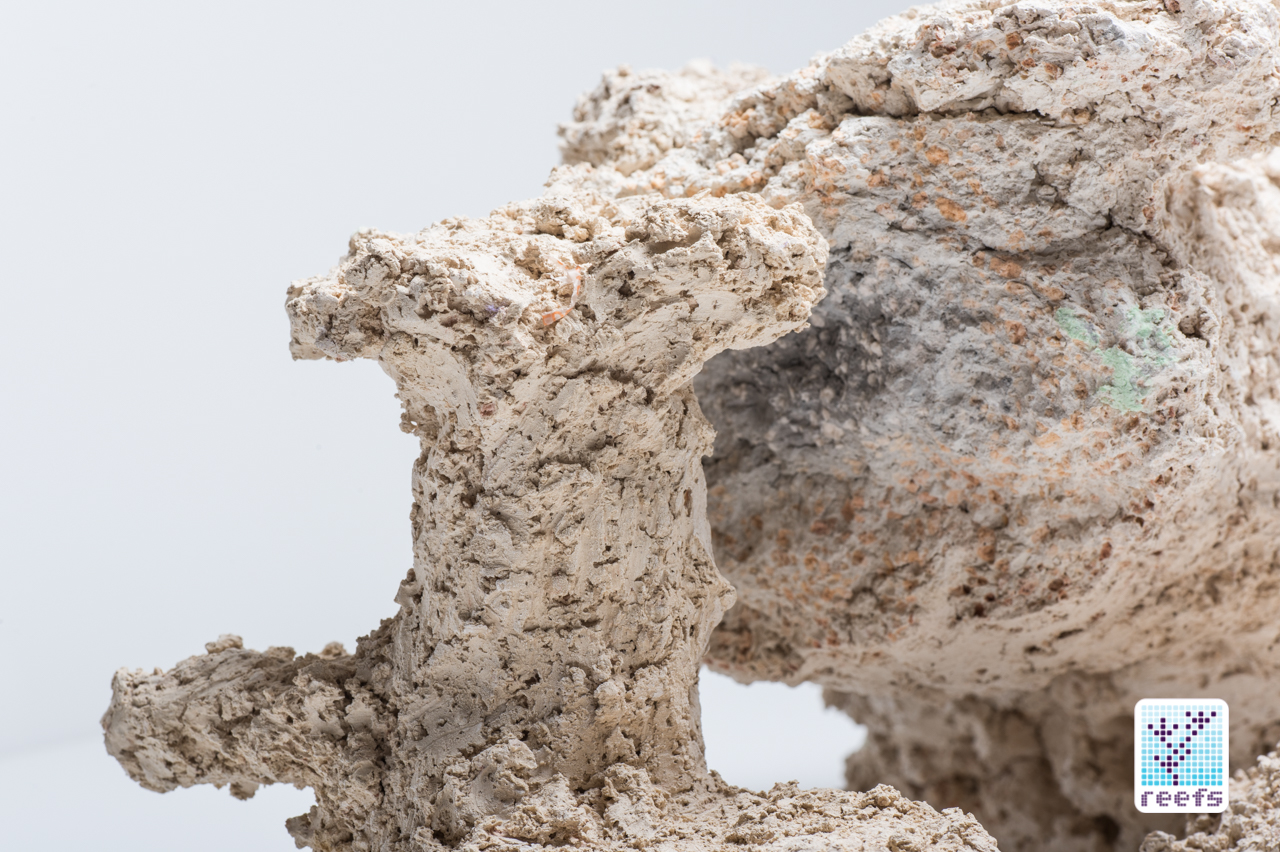 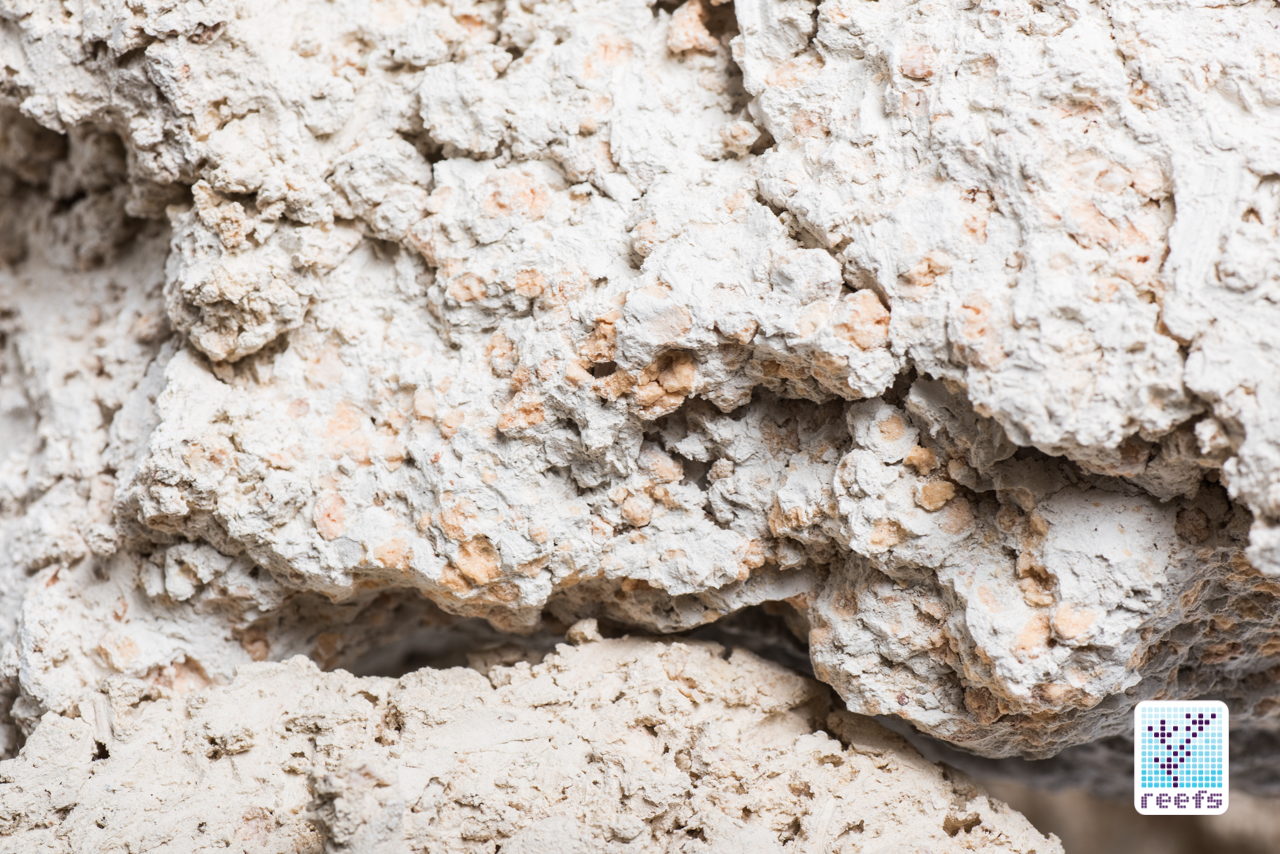 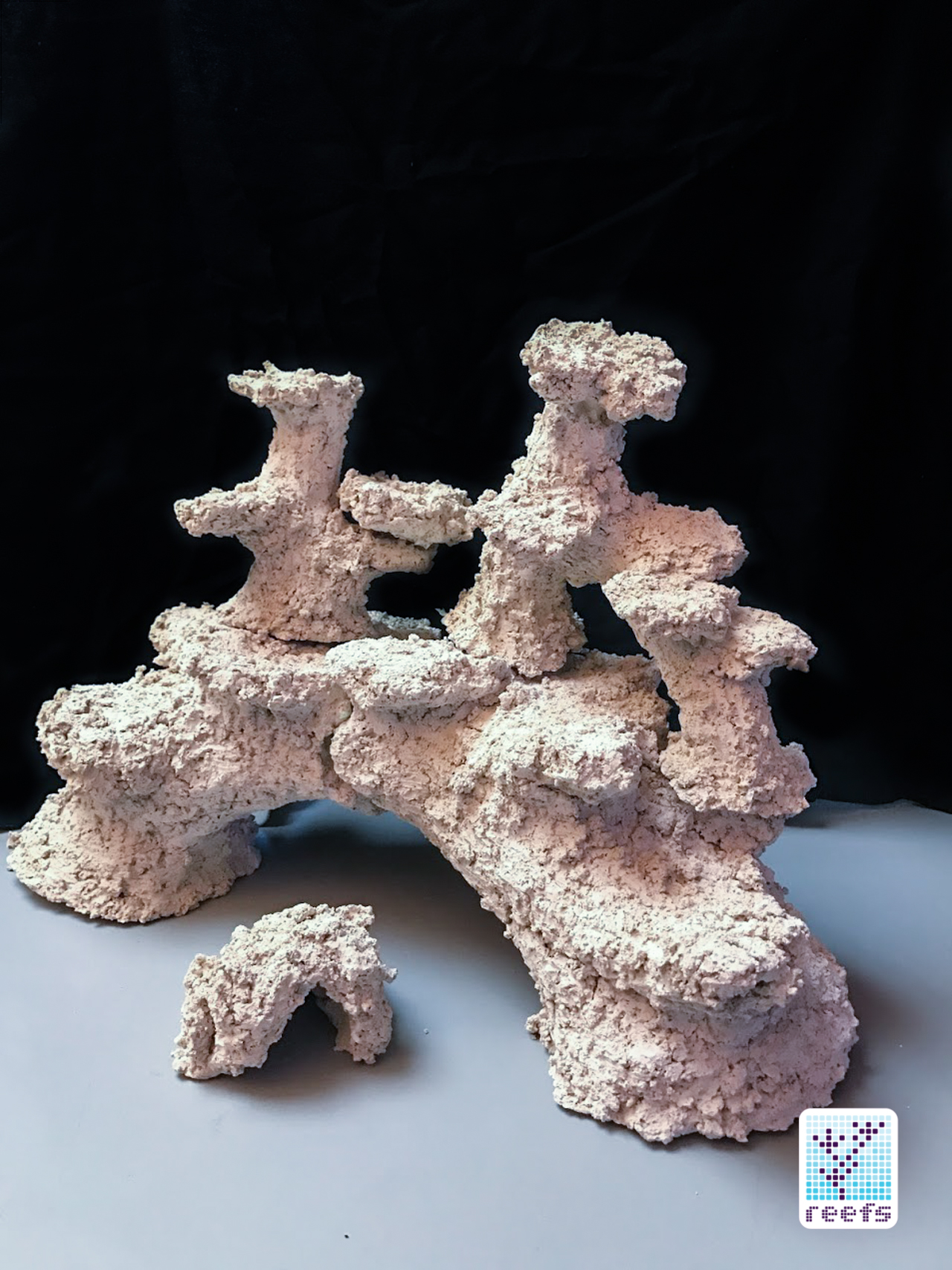 We received a few different rock pieces from PM Ceramic’s catalog: Reef Bridge, Reef Pillar, Reef Bridge Extra, and Reef Cave. The Reef Bridge piece cracked during shipping, but instead of gluing it back together, we decided to share the two halves and use them in separate tanks. Anyway, the first thing we noticed when aquascaping with PM Reef Ceramic was how much flat surface it offers for corals to be placed. Each piece is designed to maximize horizontal surface while remaining very natural-looking. We were especially impressed with the huge Reef Bridge that not only features a massive cave, in which non photosynthetic sessile animals can be placed, but also numerous ledges and overhangs at different levels of the arch for corals to reside. The bottom of each rock piece is completely flat, which eliminates the risk of toppling over the formation.

Reef Bridge extra is a smaller cousin of Reef Bridge, with one tall pillar and one shorter one, connected via an arch. Reef Pillar, as the name suggests, is a tower-like structure with a couple of overhangs extending in different directions, while Reef Cave looks like a mound with single opening in front, a perfect hideout for a shrimp or a goby pair.

This is just a small sample of what the company offers. A quick look at their online catalog reveals an assortment of interesting rock formations, from standard pillar or plateau shaped pieces to more exotic shapes like a Reef Clam Holder that has a rounded interior, ideal for ornamental clams to attach to, as well as a reef overflow cover, a flat-back tower of interwoven pillars that disguises that ugly overflow box most reef ready tanks have. Take a look at these examples of Reef Ceramic rock pieces, and reef tanks built exclusively with the product: 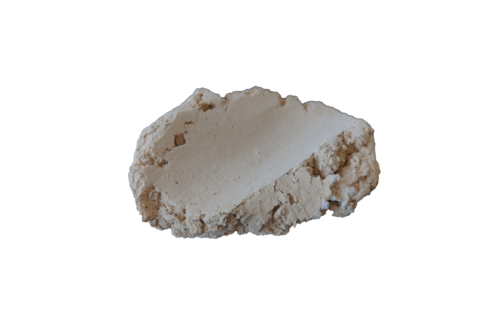 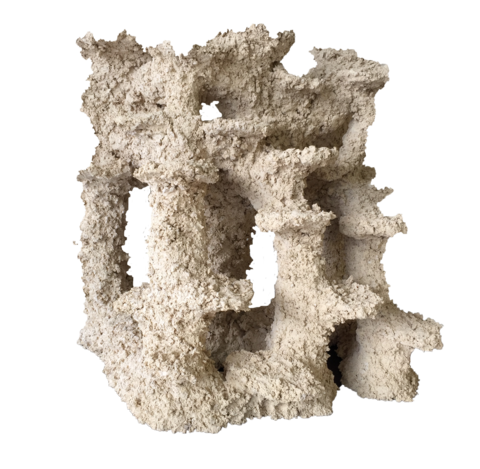 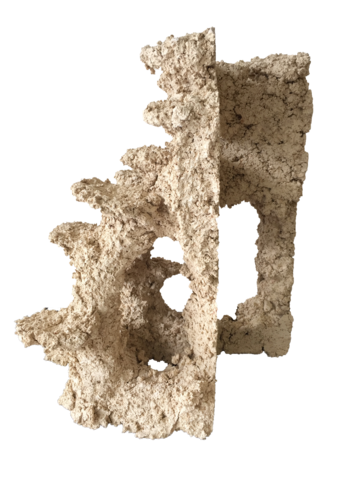 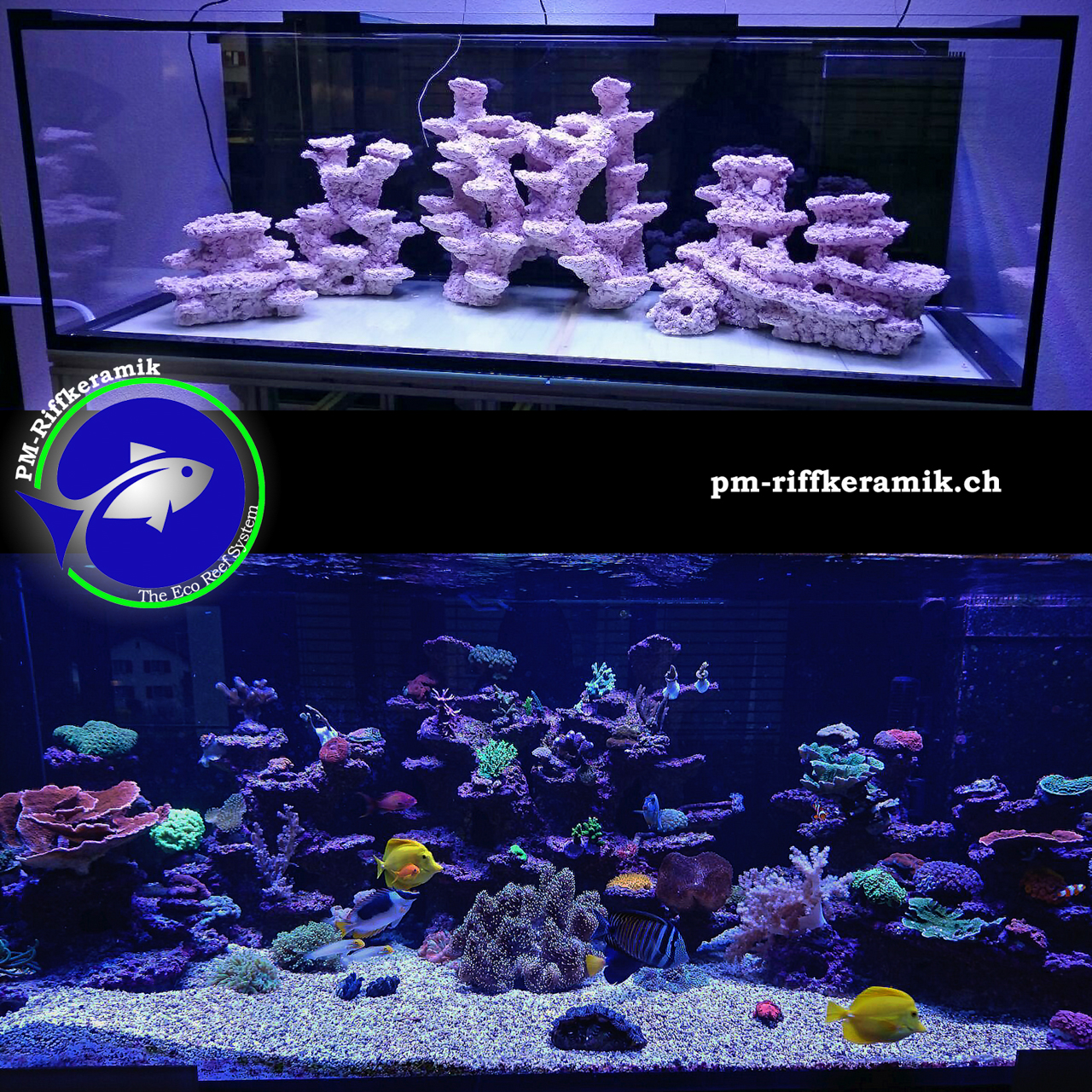 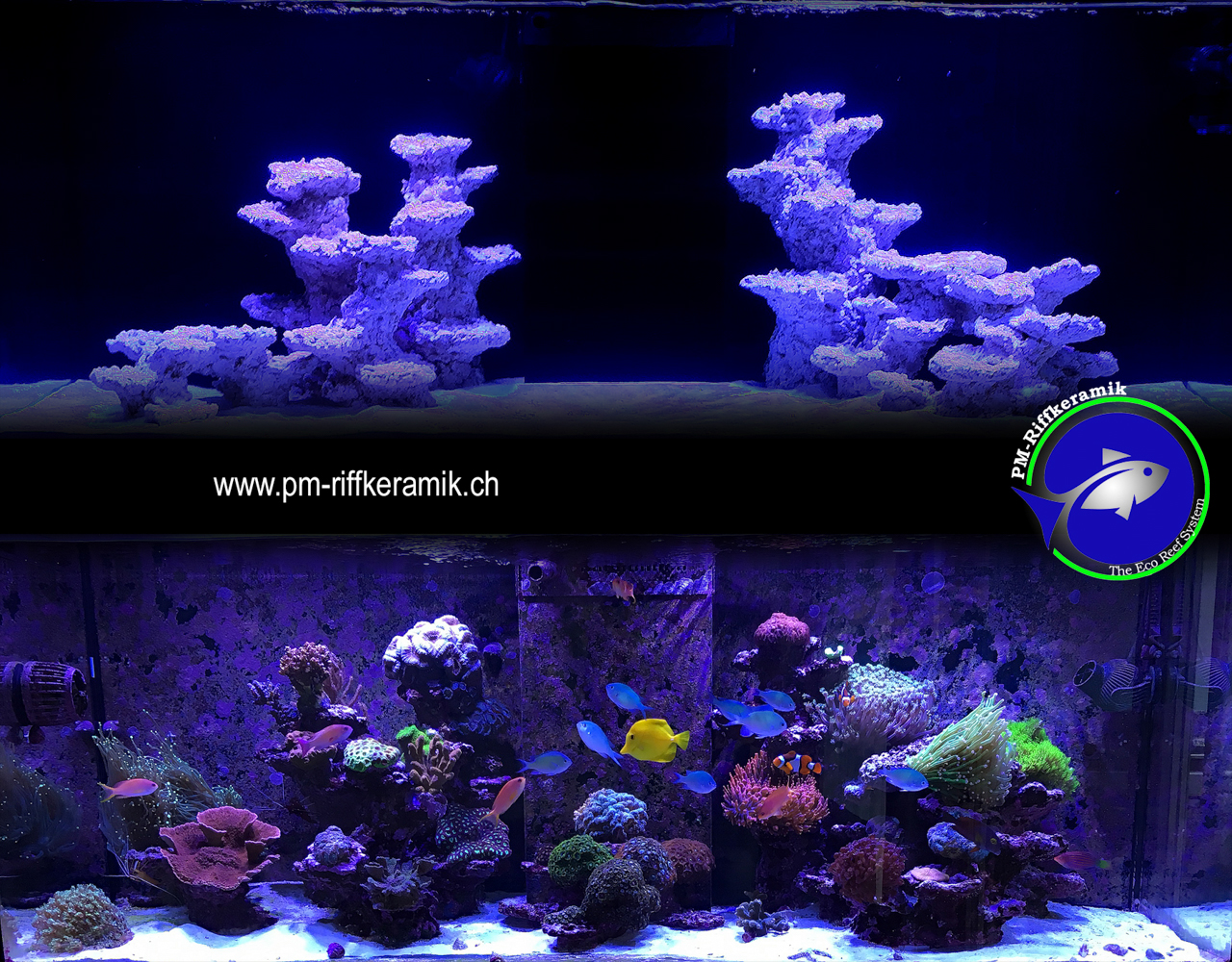 PM Reef Ceramic arrived at the perfect time, as I am in the process of switching to a larger tank and needed additional rock to support my growing kaleidoscope of reef animals. I decided to combine PM Reef Ceramic with meticulously-chiseled dry Florida rock. It turns out the two are perfect match, they blend nicely when glued together with some reef cement, and they form a structure that offers the “best of both worlds”- the usable “real estate” and strong support (flat bottom) of the PM Reef Ceramic with the more traditional look of Atlantic Reef rock. Judge for yourself: 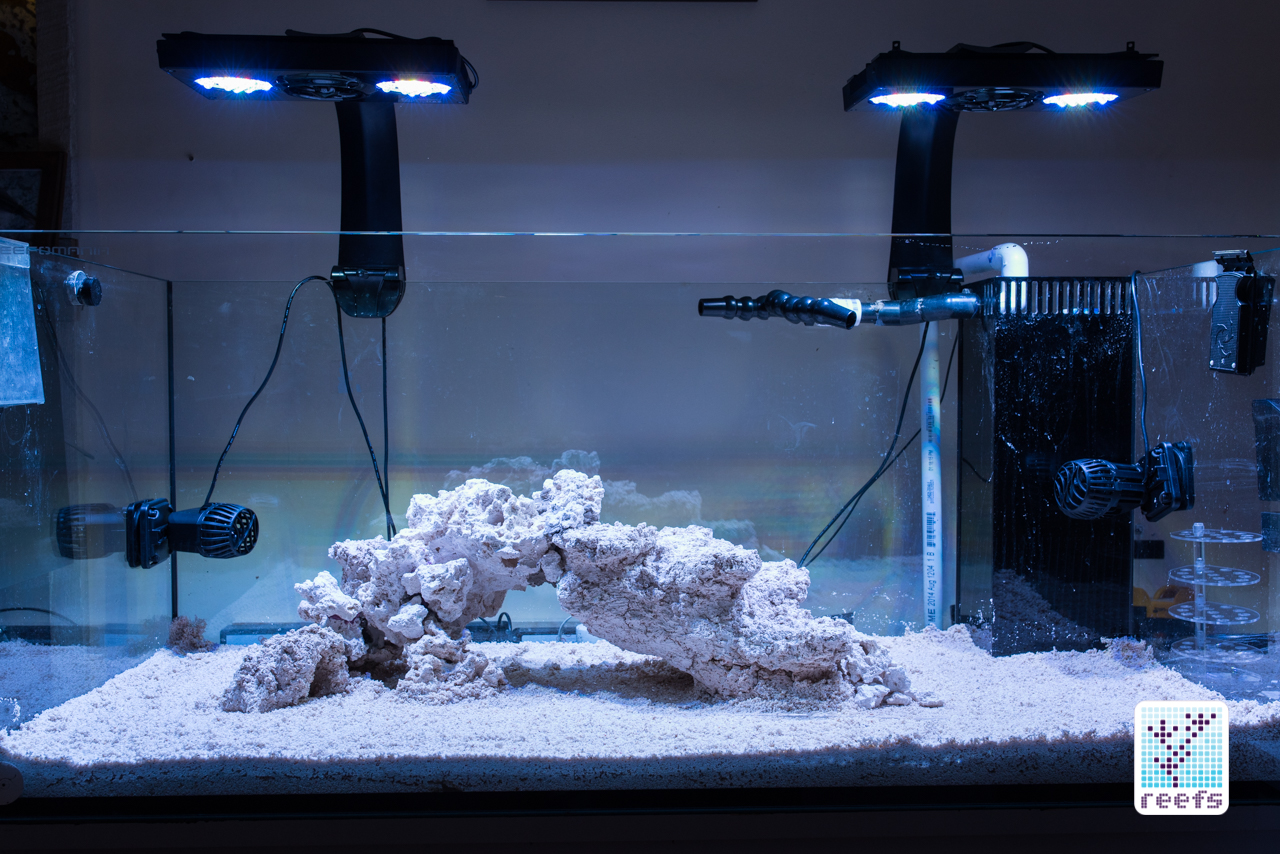 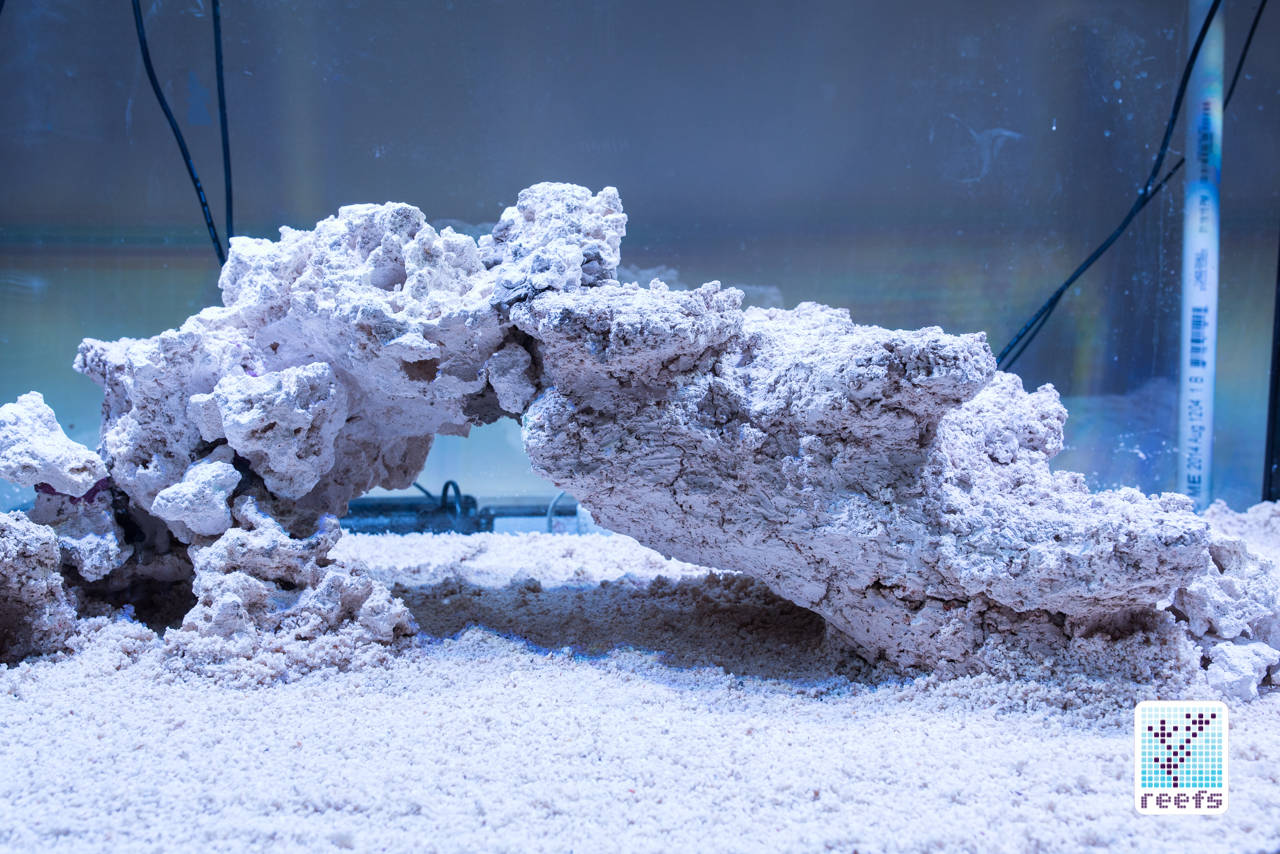 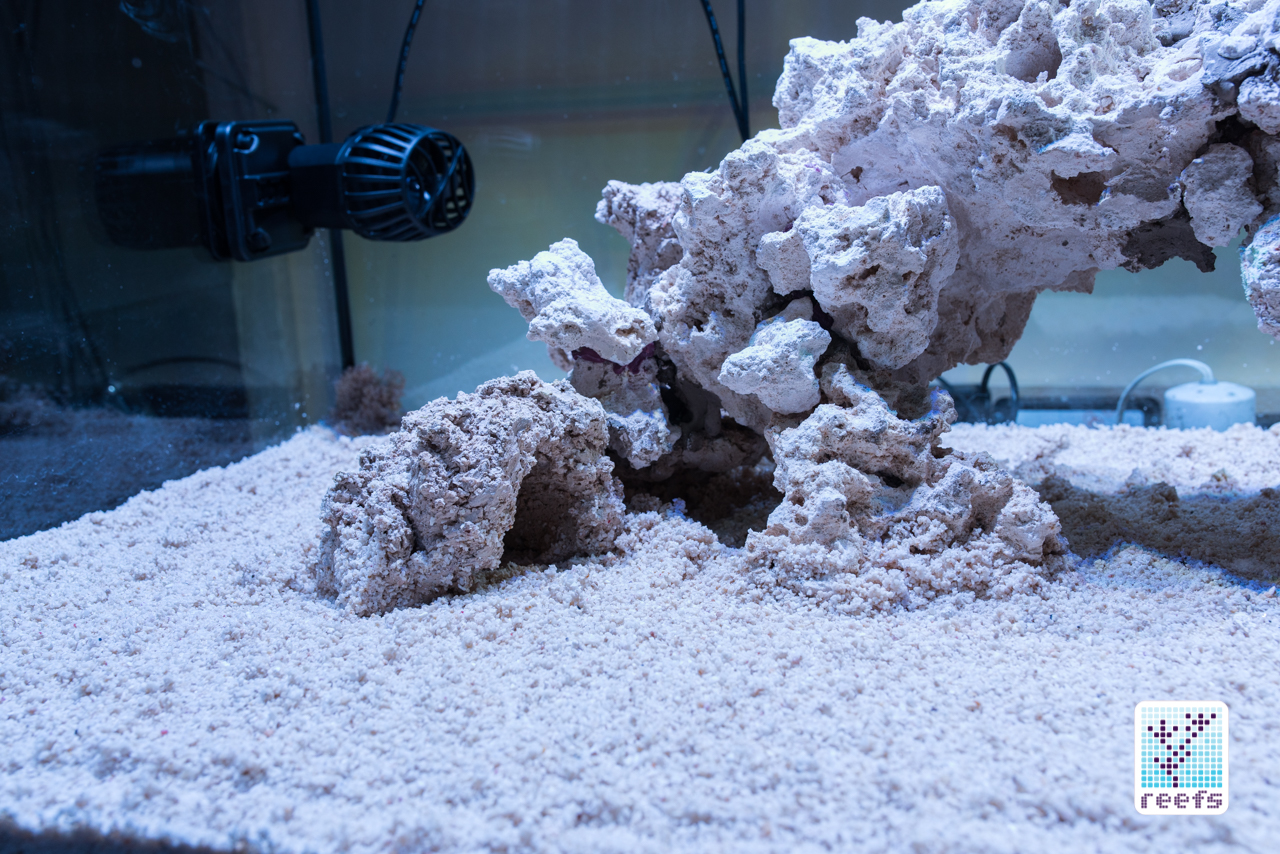 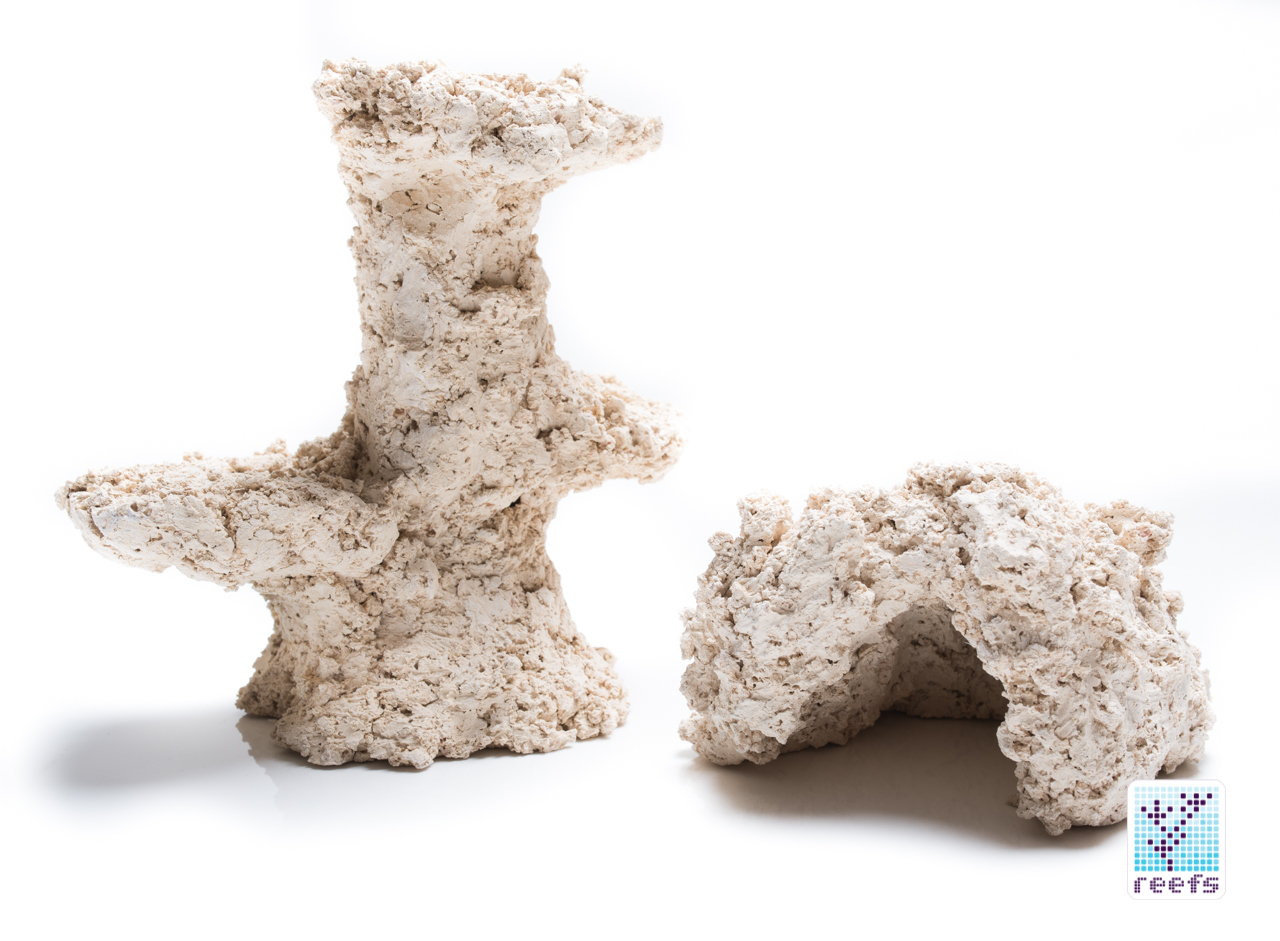 If you’re looking for a rock that closely resembles that taken from the reef, with the added benefits of no risk of leaching phosphates, a great deal of space for frags to be placed on, and some unique shapes rarely found in nature, PM Reef Ceramic offers all of the above and more. It’s very porous, has a solid, flat bottom, mimics real reef rock’s color and structure accurately, and most of all, is a good ecological choice, and helps the hobby in its sustainability goals.

Besides the premade rocks PM Reef Ceramic lists on its website, the company also offers a broad level of customization to their products. Clients can ask to have the rock pre-drilled for frag plugs, also available from PM. In addition, the order can be shipped with the company’s proprietary bonding cement, as well as a blend of beneficial bacteria to “seed” the newly acquired rock pieces.

For serious aquarists that want to have their reef structure made exactly to their specifications, PM Ceramic designs and manufactures custom made rocks.

PM Reef Ceramic just started international distribution of their products, and is currently looking for US distributor. Currently, large orders can be fulfilled and shipped directly from Switzerland, but if your company is interested in distributing PM Reef Ceramic, give them a call or write using the contact form on their website.