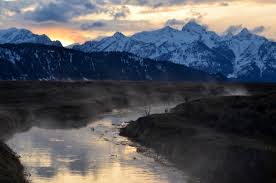 Kelly Warm Spring in Grand Teton National Park, Wyoming, has been an illegal dumping ground for non-native aquarium fish since the 1940’s. The non-native fish have become a threat to native species. Aquarium dumping is a widespread problem throughout all of the Unites States.  You can see goldfish, madtoms, and bullfrog tadpoles, non-native species that were dumped illegally, throughout the springs.

The exotic fish are capable of surviving in a variety of temperatures, and breed at a quick pace. The growth of the invasive species over the years has come at a detriment to the natural habitat. Park biologists, working together with the Wyoming Game and Fish Department biologists, have suggested removing the exotic fish by using rotenone,an EPA-approved piscicide. This is the preferred method of removal, since it is more effective than attempted net capture. Biologists believe this can be performed with minimal harm to the native plants and species, and the piscicide would not persist in the environment. The park would be closed to the public during treatment. Grand Teton National Park is currently seeking public review and comments on the proposal.

This story brings to light a reminder that aquarium owners need to be responsible when they make the decision to say good-bye to their fish. Releasing non-native species into natural habitats can have devastating effects for the wild. Although releasing an unwanted aquarium fish may seem preferable than the alternative, saving one fish at the risk of harming an entire species or ecosystem is not the answer.