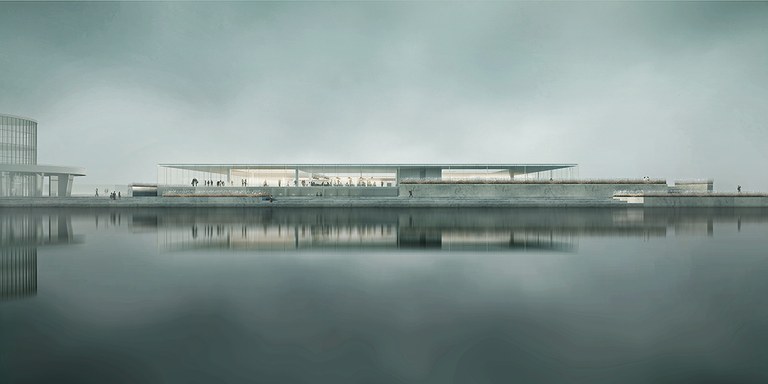 The South Pier at Gdynia (photo right) already has a public aquarium, which was built in 1971.  The Gdynia Aquarium is a modest facility by modern standards housing only about 200 species of animals (for comparison’s sake, Steinhart Aquarium [California] houses more than 900 species).  A great portion of the facility serves as a “sea museum” rather than live exhibits, while recent renovations added educational activities (e.g. laboratories and touch-tanks). The aquarium is popular destination for school children.

The real estate at the end of the pier is undeveloped (and reportedly under-visited) park space.  Architect Milolai Adamus hopes to convert this “misused” space into the location of a new, contemporary public aquarium.

His concept features four stories of exhibits with only one story visible at ground level.  The top story serves as an observation deck while three stories of live exhibits are located underground, some of which is below sea level.

The minimalistic square architecture may look simple, but a lot of careful thought went into its design.  Adamus used the Golden Ratio and  Fibonacci Sequence as inspiration for the floor plan as is shown in the top-down blueprint below.  A lot of asymmetrical open space is shared between the four stories to add a dynamic experience for foot traffic and visual impact.  Glass is used extensively throughout the design to open up the sight-lines – a great idea in architecture dominated by long straight lines.

This public aquarium is only a proposal at the time of this article.  We really hope to see this concept become reality some day.  Move over, churches, museums, and music halls!; public aquariums are quickly becoming the favored building type for grand architecture.

3D models of the proposed aquarium

The new aquarium is the square “donut” building located at the end of the pier (e.g. rightmost building in the first photo).  The existing Gdynia Aquarium is also seen in the models; it is the long, narrow, rectangular building with a rounded seaward-facing side located next to the proposed new aquarium.