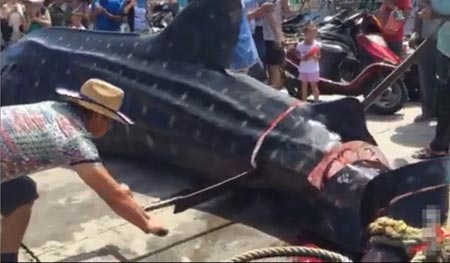 An video of two men cutting a whale shark into pieces, while allegedly still alive, is causing Chinese and International horror. Whale sharks are protected animals under Chinese and International Law. These gentile sharks are the biggest fish and shark in the World. Feeding off of Plankton, they are often captured in photographs roaming through the water with their mouths wide open.  In 2014, the National Geographic published this article about the large number of Whale Sharks, over 600 per year, that were being slaughtered and ‘processed’ by a factory in Southeastern China. Although appalling, it is not that surprising considering that shark meat and fins are revered Internationally as a delicacy and for their alleged medicinal purposes, particularly China. One Whale Shark can bring in tens of thousands of dollars, with meat being sold to restaurants, the fin used for shark fin soup, and oil used to make medicines and supplements. Unfortunately, they are also the unintended by-catch by fishing nets. This story reports the video shows the men cutting the whale shark apart while it was still alive. However, the fishing ban was just lifted in China, so its possible the Shark was accidentally caught. However,the most alarming aspect of this story is the fact that the shark was reported to be alive when it was cut into. Hopefully this disturbing occurrence is being investigated.