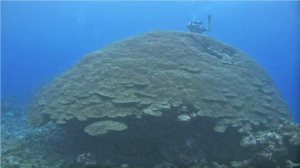 In partnership with the Samoan people, NOAA has just announced the establishment of a new National Marine Sanctuary in American Samoa. Fagatele Bay in American Samoa had previously been established as a National Marine Sanctuary (one of only 14 such sanctuaries, along with the Papahānaumokuākea Marine National Monument, encompassing the Northwest Hawaiian Islands), however, this new sanctuary dramatically enlarges the protected area. The largest addition comes via a huge, square protected area around Rose Atoll, but includes several other additions. Just to put the size of the sanctuary into perspective, with these latest additions it is slightly larger than the state of Maryland.

Especially significant is the addition of a large fraction of the waters surrounding Ta’u Island, which is home to some of the largest, oldest tropical corals in the world. One especially large Porites cf. lutea colony measures 7 m (23 ft) tall, 12-17 m (40-56 ft) across, and 41 m (135 ft) around. Based on measured growth rates for the species, this coral is estimated to be at least 360-800 yrs old, but could be much older.

See a video of the exciting news here: http://www.youtube.com/watch?v=MMqZXfwuJuw&feature=youtu.be