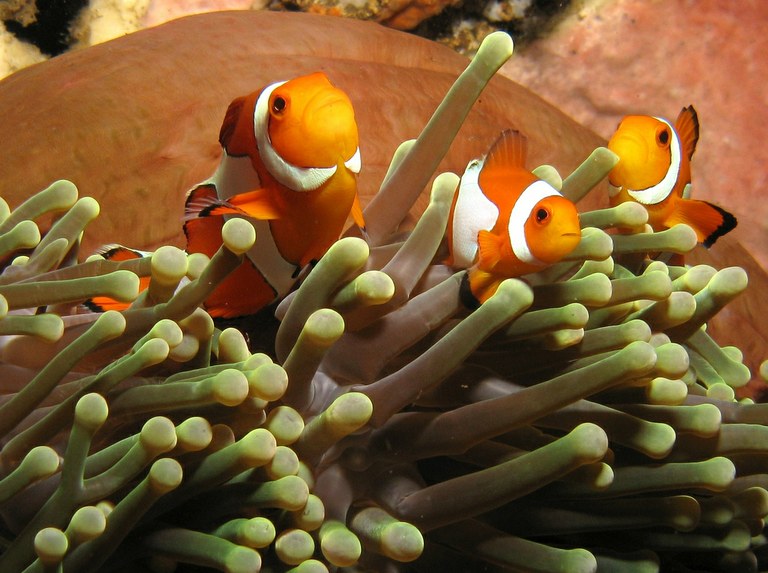 Three clownfish hang out in their host anemone. Photo by Prilfish / Flickr.


Hot on the heels of Petco encouraging their customers to try freshwater instead of saltwater tanks after seeing the new Finding Nemo movie, the Center for Biological Diversity has formally petitioned that clownfish and a number of other damselfish have formal Endangered Species Act protection due to environmental stresses.  The eight species that are sought protection for are:

The 85-page document details the specifics of what the Center for Biological Diversity is seeking in their petition.

“We risk losing the striking fish that inspired Finding Nemo forever if we don’t put the brakes on global warming and ocean acidification,” said Shaye Wolf, the Center’s climate science director. “Carbon pollution harms these fish and destroys their coral reef homes. If we want these beautiful animals to survive in the wild, not just in a movie, we have to protect them under the Endangered Species Act.”

Clownfish and damselfish are at risk from ocean acidification — caused by the oceans’ absorption of man-made carbon dioxide pollution — which damages their hearing, sight, and smell. Ocean acidification interferes with the ability of young fish to avoid predators and find their coral reef homes. Some of these fish suffer predation rates five to nine times higher than normal at CO2 levels that are expected later this century.

Ocean acidification and warming also threaten to destroy the coral reef habitat of clownfish and damselfish. Scientists have warned that coral reefs are likely to be the first worldwide ecosystem to collapse due to global warming. Ocean warming is rapidly degrading and destroying coral reef habitat by increasing the frequency and intensity of mass bleaching events that can kill corals. Ocean acidification has already caused coral growth in some areas to become sluggish.

“Coral reefs are the rainforests of the ocean, but carbon pollution will bulldoze their biodiversity,” Wolf said. “The longer we wait to provide Endangered Species Act protection and reduce the greenhouse gases harming reef fish and destroying their homes, the harder it’s going to be to save these unique creatures.”

Chromis viridis, one of the fish that is sought for protection by the Endangered Species Act. Andreas März

The orange clownfish and damselfish may also face threats from the global marine aquarium trade. The United States is the world’s largest importer of ornamental marine fish, and damselfish and anemonefish are by far the most commonly traded species. Studies indicate that the orange clownfish and black-axil chromis damselfish are suffering population declines in the wild because of overharvesting for the aquarium trade.

The reef fish in today’s petition include the orange clownfish, which spends nearly its entire life protected within anemones on coral reefs, and seven species of damselfish that occur in U.S. waters and depend on branching corals particularly vulnerable to climate change threats.

Those fish are: the yellowtail damselfish that inhabits waters in Florida, the U.S. Virgin Islands, Puerto Rico and the Caribbean; the Hawaiian dascyllus and blue-eye damselfish, which inhabit Hawaiian waters; and the black-axil chromis, Dick’s damselfish, reticulated damselfish and blue-green damselfish that live in the Indo-Pacific, including U.S. territorial waters in American Samoa and the Northern Mariana Islands.

The Center is working to protect the coral reef habitat that these reef fish depend on, and in 2006 we successfully protected two Caribbean coral species — elkhorn and staghorn corals — under the Endangered Species Act.

The Center also petitioned to protect 83 other corals in the Caribbean, Hawaii and the Indo-Pacific in 2009. The National Marine Fisheries Service determined that 56 of these corals are likely to go extinct by the end of the century, primarily because of ocean warming, ocean acidification and disease. The Service will decide whether these corals merit protection under the Endangered Species Act in December 2012.

To learn more about these fish, visit our Web page.

To learn more about our efforts to protect their coral habitat, visit http://www.biologicaldiversity.org/campaigns/coral_conservation/index.html

The Center for Biological Diversity is a national, nonprofit conservation organization with more than 375,000 members and online activists dedicated to the protection of endangered species and wild places.