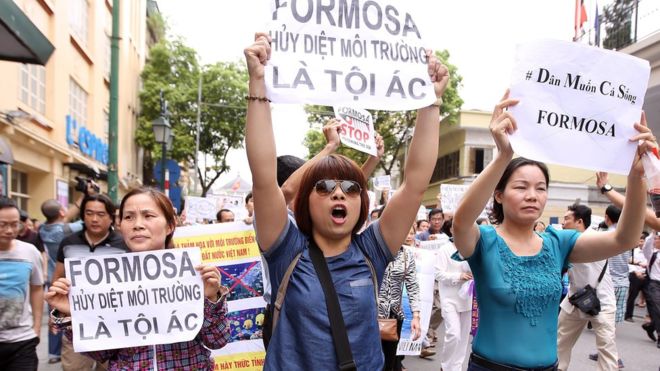 On Sunday, thousands of protesters lined the streets of Ho Chin Min City and Hanoi, Vietnam. A rare scene in the communist country. The people were looking for answers to the recent mystery fish deaths which took place in the past month in over four different provinces. From April 6 to April 18, 2016, millions of dead fish, both farmed and fresh, lined over 125 miles of coastline. Farmed fish began dying first, followed by wild fish which washed up along the coast. The government of Vietnam advised that the fish should be avoided and investigated a possible environmental disaster. The government also suggested the deaths could be linked to possible algae bloom, but no conclusive cause has been reported. Protesters blamed a Taiwanese firm called Formosa Plastics, which operates steel plants in Vietnam. Formosa Plastics has been ordered to dig up an illegal waste pipe at its plant so the government can see if there is any relation to the deaths. According to the Vietnamese government, currently there is no link between the fish deaths and Formosa Plastics. However, the protesters suggest otherwise and held signs saying ‘Formosa Out’ and ‘Who poisoned our central waterways?. Formosa has denied any connection to the fish deaths and stated that its plant meets with all of Vietnam’s regulations. The massive unexplained fish deaths have hurt the fishing industry and tourism in Vietnam. Fisherman along the affected areas have been banned from selling their stock. This crisis is both environmental and financial, as much of Vietnam’s income depends highly on exported fish for income. At this time, the cause of the deaths is still unknown. MORE