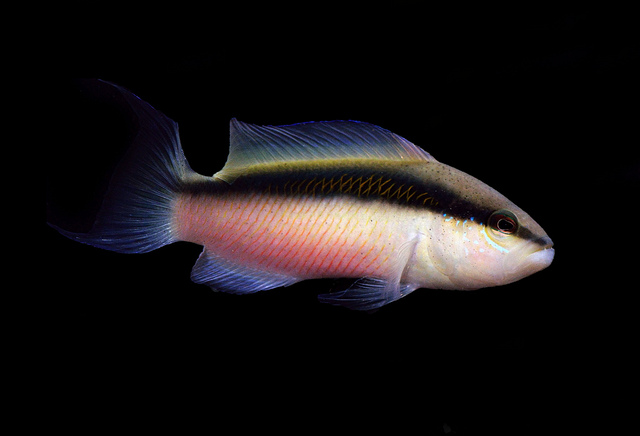 A large male Pseudochromis colei. This represents the first known individual since its redescription in 2012, and doubles up as the first individual offered to the aquarium trade. Photo credit: Lemon TYK.

The subfamily Pseudochrominae (family Pseudochromidae) boasts colorful small to medium sized, reef associated fish. Of the ten genera nestled within this subfamily, Pseudochromis is the most speciose, and perhaps the most familiar amongst divers and aquarists. And of the seventy or so species, not all readily fall into the acquaintance of the enthusiastic reefer, and at least a third or more are either extremely rare or elusive. One such fish fulfilling this status is Pseudochromis colei, which, until the turn of this century, was known only from one specimen.

Pseudochromis colei superficially resembles P. perspicillatus in appearance, but the former can be diagnosed by having a black lateral stripe that is always disconnected from the dorsum. Present within this stripe is a series of gilded crosshatch stitches. The posterior ventral region is extensively slated in a dulcet rosy wash with oblique scratchings in a darker hue. In P. perspicillatus, these markings are absent, and the black lateral stripe often invades the head and dorsal fin base. 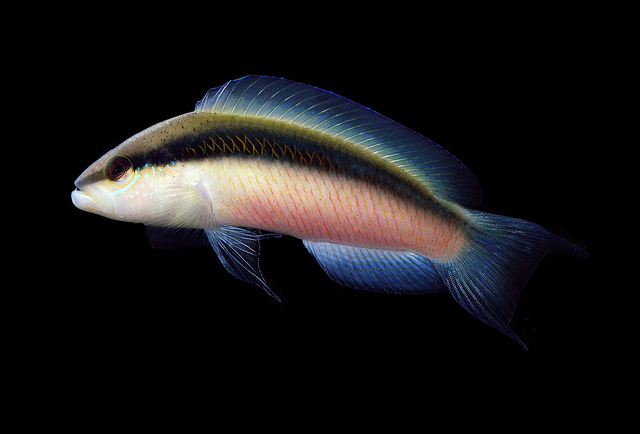 Pseudochromis colei. Note the gold cross-stitching within the black lateral stripe and the rosy wash on the posterior venter. Photo credit: Lemon TYK.

The handsome Pseudochromis colei was first known and described in 1933, from a single holotype collected in Culion, Philippines. It’s live coloration was unknown then, and the species proved highly elusive, remaining unseen for the next seventy years. It was later redescribed in 2012 on the basis of two additional specimens collected by Gerry Allen and Mark Erdmann in Palawan, Philippines. The redescription paper also included descriptions of two new Pseudochromis, now known as P. eichleri and P. ammeri. To date, Pseudochromis colei is known only from the type series of three specimens from Culion and adjacent Palawan. 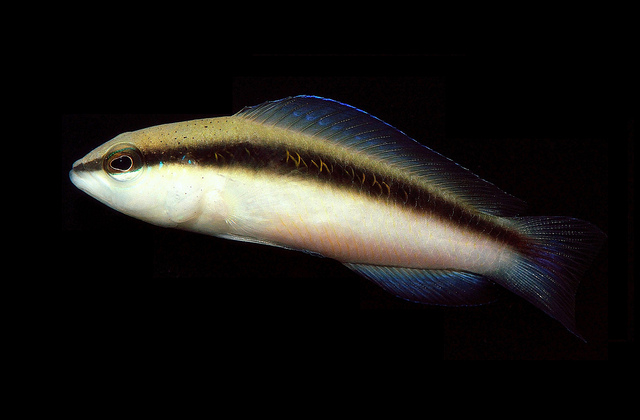 In the recent weeks, RVS Fish World collected three specimens from their substation in Palawan, of which two were juveniles. The reappearance of this species since 2012 brings the underestimated total number of documented individuals to six, with the first records of P. colei in its juvenile coloration. The juveniles are similar in appearance to the adults, but lack the diagnostic rose wash and the emarginate caudal fin. Although this species proves to be highly elusive and rare in both the aquarium industry and the scientific community, it is likely that the species itself is not uncommon in the wild. In all likelihood, it manages to maintain its enigmatic aura through secrecy and preference for current swept channels with silty, coastal influences. It is, however, known only from its type location, Culion, and nearby Palawan; although its true geographic distribution is expected to be much larger.

The second dotty back with near book-fish status is Cypho zaps. The polar opposite of Pseudochromis, Cypho is one of the least speciose in the subfamily Pseudochrominae, and holds only two species – the very ubiquitous Cypho purpurascens, and its extremely enigmatic sister, Cypho zaps. The former is a common species from the southwest Pacific, from the Great Barrier Reef, north to the Admiralty Islands, south to Elizabeth Reef and east to Tonga. The species enters the aquarium trade fairly regularly from Australia and Vanuatu. C. zaps, on the other hand, occupies an allopatric distribution in the northwest Pacific, from the Ryukyu Islands, Batan Islands in northern Philippines, southern Taiwan, Luzon and northeastern Indonesia. It is also recorded from Halmahera in West Papua. Both species do not overlap in distribution, and are easily distinguished from basic phenotypic differences in body patterning. 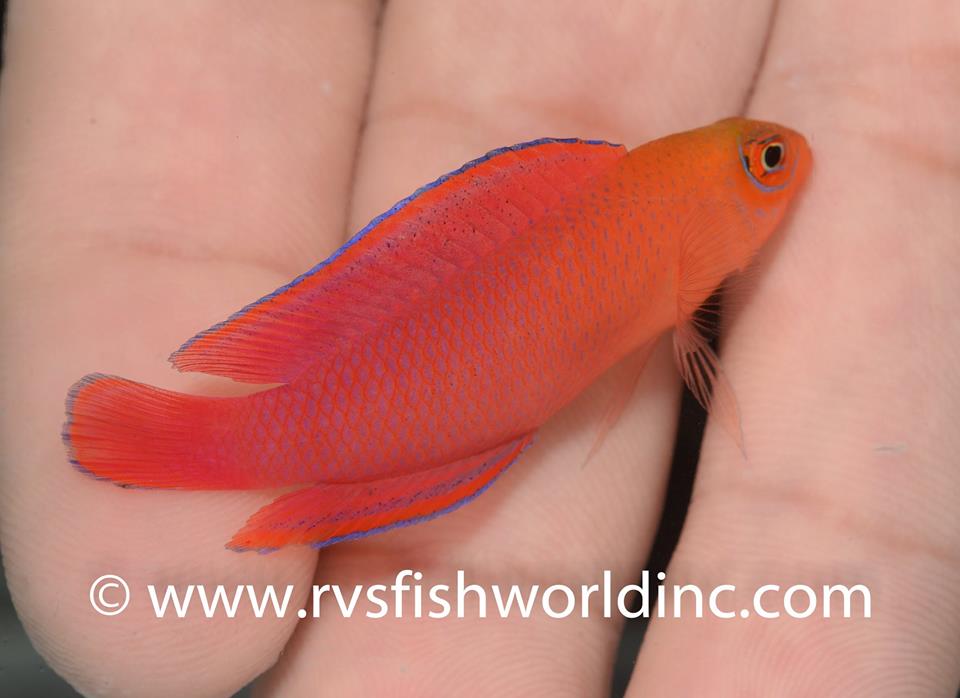 Cypho zaps. Note the blue markings confined to within the scale, separated and disconnected from each other. Photo credit: RVS Fish World. 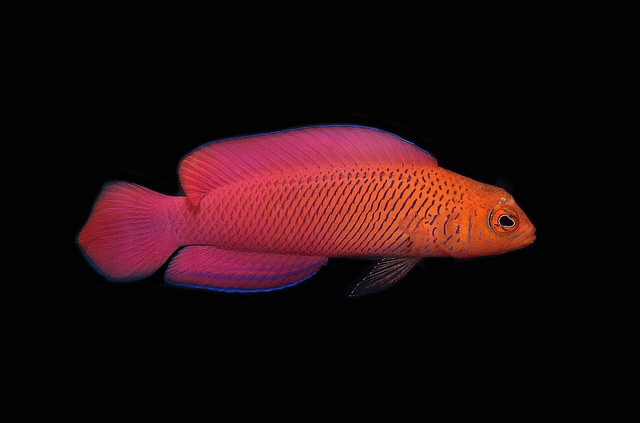 Cypho zaps is easily separated from its geminate twin on body patterning and biogeography. In C. zaps, the central scale spots are always disjunct and disconnected, while in C. purpurascens, the spots always conjoin to form a series of oblique lines. Unlike its ubiquitous sister, Cypho zaps is poorly documented in the trade, with patchy distribution records riddled with disjunct localities between the Ryukyus and Philippines proper. This single specimen collected from Zamboanga helps to fill in part of that missing biogeography, and doubles up as the first specimen collected for the mainstream aquarium trade.

The species has a rather beautiful name. The specific epithet “zaps” is greek for storm. Almost all the type specimens were collected in the Batan Islands, Philippines, by the Smithsonian Institution. During the expedition, the team was stranded on Y’ami Islands for several days during a massive storm, and the species was subsequently named after the mini meteorological crisis. Both Pseudochromis colei and Cypho zaps are two exceptionally “rare” fish from a region of rampant aquarium collection. The dichotomy of the two genera, one being very speciose, the other very lacking, juxtaposed against their occurrence in heavily explored Philippines, makes these two fish somewhat of a curiosity. Dottybacks are mean and somewhat pugnacious, but their charm and penchant for the art of illusory evasiveness is something that everyone can appreciate and admire.