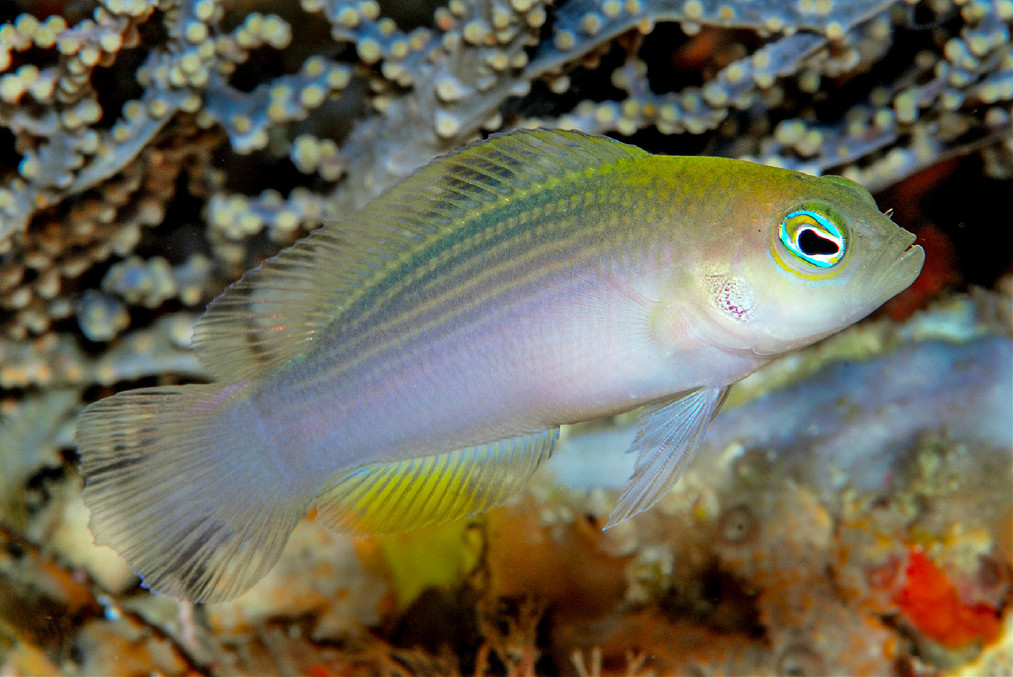 The mesophotic reefs of Indonesia are a realm of perpetual twilight, but from these dim waters comes a new species of dottyback that shines brightly—Pseudochromis stellatus.

Described in the latest edition of Zootaxa by dottyback authority Anthony Gill and the prolific ichthyological duo of Gerry Allen and Mark Erdmann, this fish has so far only been encountered on the steep outer slopes (55-70 meters) of Raja Ampat, Indonesia. This region sits at the heart of the Coral Triangle and is renowned for its immense biodiversity and an unusual propensity for producing species found nowhere else.

The most outstanding feature of P. stellatus are the yellow scales that scintillate along its body like a thousand suns, poetically speaking. For this reason, the species’ scientific name comes to us from the Latin stellatus, meaning “starry” (a name that was selected by high school students participating in a science activity at the University of Sydney’s Macleay Museum). The suggested common name—Greenhead Dottyback—alludes to the subtle chartreuse glow said to be present around this creature’s head… though I’d say the students did a better job at naming this one.

There have been other similar dottybacks sighted from nearby waters, and these may ultimately wind up being described as distinct species in their own right. The late Roger Lubbock (of Cirrhilabrus fame) collected some similar specimens in the Philippines, and this same Filipino fish has even found its way into the aquarium trade at least once, having been exported from Cebu. Additional populations of yellow-scaled dottybacks are reported from Cenderawasih Bay (just to the east of where P. stellatus is known from) and from the easternmost tip of New Guinea.

Along with this discovery, a newly recognized complex of closely related dottybacks was suggested for P. stellatus. The most familiar for aquarists will be P. tonozukai, a sporadically exported Indonesian species with some especially prominent sexual color differences. But the others in this group are a veritable who’s who of obscure pseudochromids: the Zippered Dottyback (P. jace), the Painted Dottyback (P. pictus), and the Reticulate Dottyback (P. reticulatus), a species so elusive that it has still yet to be seen alive.