Spoiler alert: Despite the puffer’s best effort, the eel wins.  The reason for the eel’s victory lies with its amazing mouth.  Most moray eels not only have razor sharp teeth to hook flesh and jaws that can hyper-extend to fit large objects (like a puffed puffer), but they also possess second sets of extendable jaws (tucked deep within their mouth) that make them even more effective hunters.

Most fish species with pharyngeal teeth do not have extendable pharyngeal jaws. A particularly notable exception is the highly mobile pharyngeal jaw of the moray eels. These are possibly a response to their inability to swallow as other fishes do by creating a negative pressure in the mouth, perhaps induced by their restricted environmental niche (burrows). Instead, when the moray bites prey, it first bites normally with its oral jaws, capturing the prey. Immediately thereafter, the pharyngeal jaws are brought forward and bite down on the prey to grip it; they then retract, pulling the prey down the moray eel’s gullet, allowing it to be swallowed.

In other words, once the eel chomped down on the pufferfish, its extendable second jaw made sure to lock and retract the pufferfish into its mouth, spelling its doom.

Now go re-watch the video.  Thanks to the puffed puffer keeping the eel’s mouth open, you can actually see the exact moment the pharyngeal jaw does its job.  The pufferfish disappears into the eel’s mouth shortly thereafter.  It’s really quite a rare and amazing footage.  As great as the pufferfish’s defense is against many other predators, eels have evolved a special evolutionary advantage to make the fight lopsided.

The diagram to the right shows how the extendable pharyngeal jaw works.  Doesn’t it remind you of the xenomorph in Alien? Guess what?  The moray eel was indeed the inspiration for this science fiction monster according to Smithsonian: 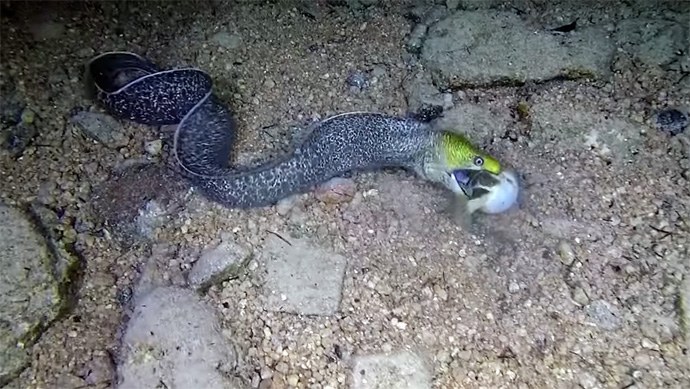