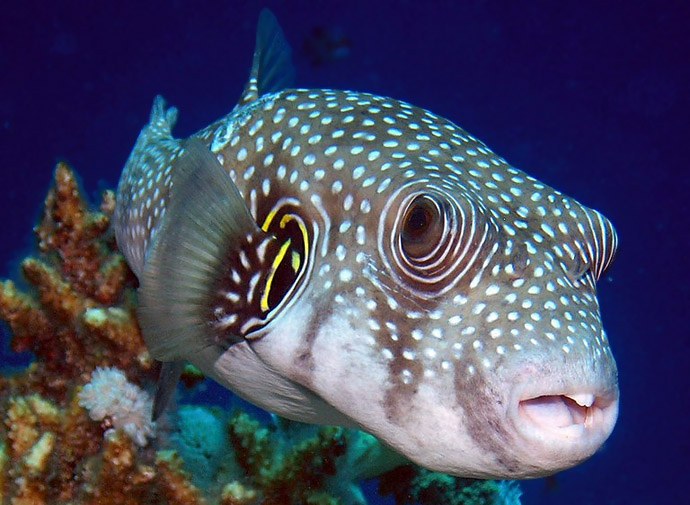 
New research focusing on tooth development in the deadly fish – unchanged through evolution – shows that after the first generation of teeth the programme for continued tooth replacement modifies to form a distinctive and unusual `parrot like´ beak.

The study, which is the first time scientists have analysed the development of the fish´s unique beak, also supports the idea that evolution doesn´t make jumps, as its distinctive bite has been modified from a set of genes responsible for tooth development and preserved over 400 million years.

Dr Gareth Fraser of the University of Sheffield´s Department of Animal and Plant Sciences, who led the project, said: “It goes beyond fishes and even morphological novelty; we can use the pufferfish beak as a model for a simplified tooth replacement system – composed of just four continually replacing teeth that make up the beak structure. It is of great interest for science to understand the process of tooth replacement, to understand the genes that govern the continued supply of teeth and mechanisms of dental stem cell maintenance.

“As humans only replace their teeth once, fishes and pufferfish in particular, can be looked at as a new model to help us to answer questions like how continuous tooth replacement programmes are maintained throughout life? This would help our understanding of why humans have lost this replacement potential, and furthermore how can we use knowledge of the genetic underpinnings of tooth replacement in fishes to facilitate advances in dental therapies.”

Pufferfish are bony fish, which are extremely diverse and make up almost half of all living vertebrates. This group uses a highly conserved process to form a unique beak-like jaw that has made teeth in all vertebrates – animals with spines – for millions of years.

The research catalogued the dental development throughout all stages of the pufferfish´s growth, from the production of initial-teeth to the construction of its distinctive `beak´. The research showed that the strange structure didn´t appear from scratch during embryonic development as a complete vertebrate novelty, but rather originates from the modified development of replacement teeth after the formation of an initial dentition, which appears like `normal´ fish teeth.

Dr Fraser added: “The beak structure is made from many bands of dentine, stacked together, each band represents a new replacement `tooth´, and they can have more than seven separate bands making up the beak, with new bands continuously being formed to replace those damaged by eating.

“Only after the start of the tooth replacement programme in just four of these first-generation teeth does this novel and bizarre beak-like structure appear. It is an example of re-specification of its genetic tool-kit for tooth development toward a very alternative, and unique, dentition.

Pufferfishes are the most bizarre of the bony fishes and have recently become a useful genetic model with the pufferfish genome project near completion. It is hoped it will provide a valuable model system for genetics, genomics, biomedical sciences and now development, not to mention the importance of this group to our understanding of the evolution of morphological novelty and vertebrate diversity.

The paper is published in the journal PNAS and was carried out in collaboration with the Natural History Museum, London and King´s College London.

(press release via The University of Sheffield, photo via Red Sea Holidays)