Pupfish Can Hold Its Breath For Five Hours 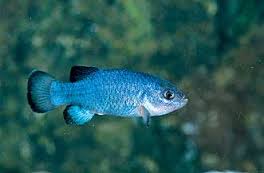 A new study reveals that the desert dwelling Pupfish can hold its breath for up to five hours. Researchers this week at the American Physiological Society’s Experimental Biology Meeting said the ability to hold its breath is an adaption which allows the fish to survive in ever changing environmental conditions. Researchers at the University of Nevada wanted to see how the critically endangered pupfish has been able to survive serious climate changes. The cool lakes they once thrived in have now reached temperatures up to almost 100 degrees Fahrenheit.  Researchers attribute the fish’s success to physiological plasticity, or essentially doing whatever it takes to adapt to environmental changes. The Desert Pupfish stops breathing for up to five hours at a time, thereby breaking down inhaled oxygen. This process does not come without its risks, and the process can lead to excess production of free radicals. The Pupfish randomly alternate between oxygen-based, or aerobic, respiration and oxygen-free, or anaerobic, respiration. The fish generate and breakdown ethanol to get energy without using any oxygen. “Sometimes organisms have to take the lesser of two evils, but it doesn’t necessarily mean this alternative is a great option,” Frank Van Breukelen from the University of Nevada says. “We think this process is really tough on the fish.” It is possible that this process also contributes to the pupfish’s shorter life span. MORE