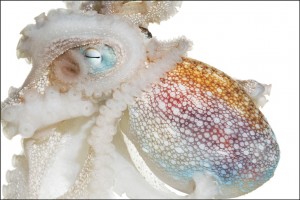 “Beneath the ocean waves, hidden from our view, a spectacular profusion of life flourishes. The vast majority of marine creatures are invertebrates, animals without spines, and they embody some of nature’s most exquisite creations. They are nature’s fashion show, the haute couture of marine life.”

A few weeks back I went in with the intention on reviewing Susan Middleton’s gorgeous book ‘Spineless: Portraits of Marine Invertebrates, The Backbone of Life’ when I became completely submerged just a few pages in thanks to a powerful forward written by Sylvia Earle. I decided at that point to split the review into two parts, allowing proper attention to each element. I want to first stress to you that not only do I recommend this book to anyone with even the slightest interest in aquatic life or even just fine photography, but if you ARE inclined to get it, please, get a physical copy. Some books really deserve to be read properly and not on a screen.

Another crucial point i want to add here is as tempting as it is to become completely taken by the commanding imagery, be sure to tear your eyes away and actually read the book. There’s a wealth of information hidden between the cephalopods, snails and nudibranchs. Middleton’s pages are filled solely with marine invertebrates, the spineless creatures lurking and floating about the deep. Laced with cephalopods, this book has my attention right of the bat, but of course there’s a profusion of other fascinating subjects to be found here.

The San Francisco based photographer has taken a deep interest in invertebrates for over 25, her interest initially sparked when photographing a vernal pool tadpole shrimp – the first on a list of one hundred endangered species in collaboration with photographer David Liitschwager. She became obsessed, completely mesmerized by their textures, patterns, shapes and colors. “Colorful, quirky, quivery, spindly, spiky, sticky, stretchy, squishy, slithery, squirmy, prickly, bumpy, bubbly, and fluttery, the invertebrates appear almost surreal, even alien”, as she describes them in the most utmost Seussian fashion.

Delving further into the pages, you’ll learn a great deal about each photographed subject, as they’re all allotted a species profile written by scientist Bernadette Holthuis, describing the species size, habitat and interesting little tidbits. For example, the Textile Cone Snail’s (Conus textile) venom is the  basis of a painkiller found to be one hundred times more potent than morphine carrying no risk of addiction according to a 2013 preclinical trial. They also have a shell length of 2.8 inches (7 cm). The book is a seemingly endless resource, and I find myself picking it up quite often to revisit a species making sure not to miss a word, or to simply marvel at the excruciating detail of these engrossing Fauna.

Pick up your own copy of ‘Spineless’ here. 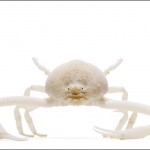 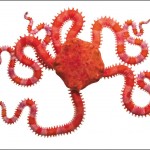 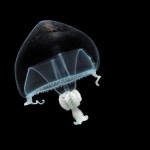