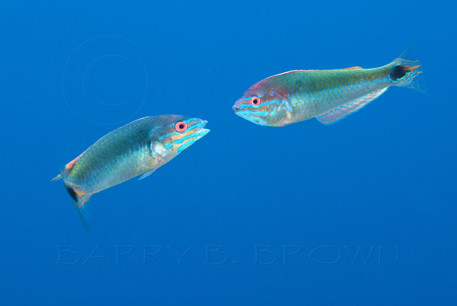 Hi all, I have two juvenile Rainbow Wrasses for you today that I found mid-water caught in a major dispute over territory! These little fish are only around four inches in length and can be very aggressive, when I first saw them they both had their mouths open yelling at each other but as I got closer for a photo I ended up with this.

The wrasses are a family (Labridae) of marine fish, many of which are brightly colored. The family is large and diverse, with over 600 species in 82 genera, which are divided into 9 subgroups or tribes. They are typically small fish, most of them less than 20 cm (7.9 in) long, although the largest, the humphead wrasse, can measure up to 2.5 m (8.2 ft). They are efficient carnivores, feeding on a wide range of small invertebrates. Many smaller wrasses follow the feeding trails of larger fish, picking up invertebrates disturbed by their passing. Juveniles of some representatives of the genera Bodianus, Epibulus,Cirrhilabrus, Oxycheilinus, and Paracheilinus hide among the tentacles of the free-living mushroom coral Heliofungia actiniformis. MORE