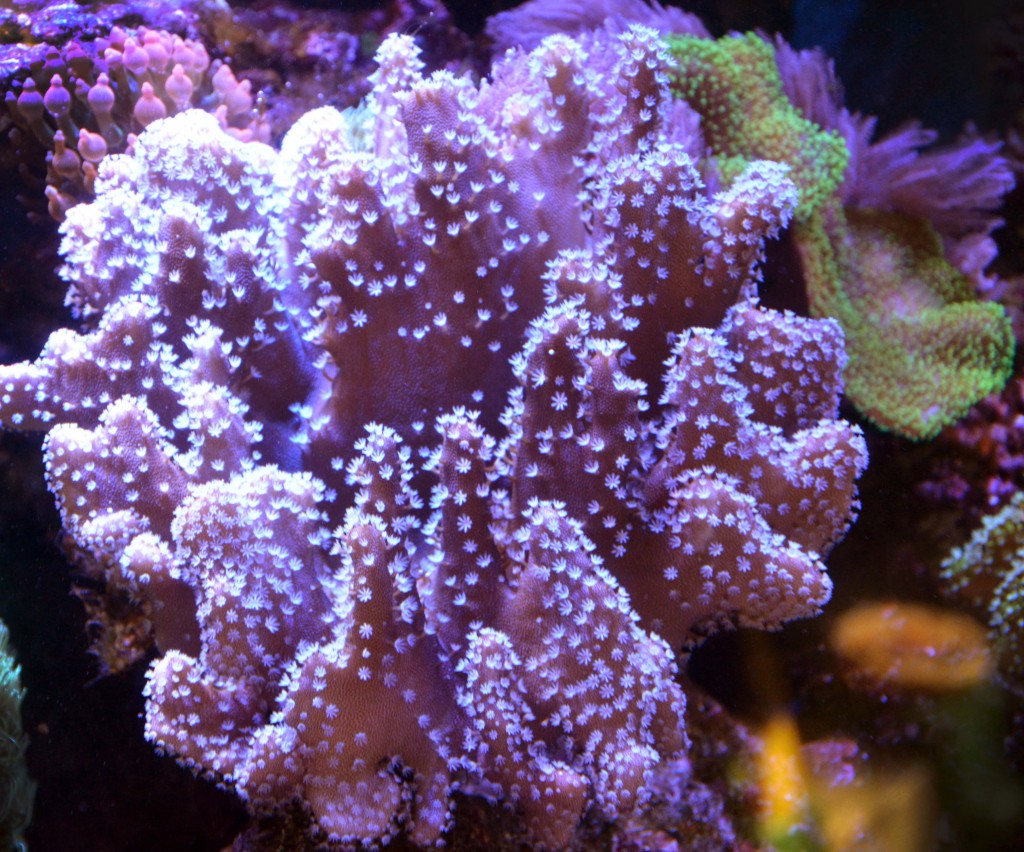 No, I’m not talking about the actual Devil’s Hand. Although when you’re watching your prized acro frag you’ve drooled over at your local LFS and finally bought simply melt away without any apparent reason, it can fell like the real Devil. Right now we’re talking about the Devils Hand leather coral, or Lobophytum if you will. Lobophytum can be a beautiful addition to a mixed reef tank, and my bi-color blenny in particular had claimed these leather colonies as his personal perches. The white or tan flower polyps that emerge make these corals look like dandelions that have gone to seed and add quite a bit of personality. However, when they are aggravated, or the tank’s perimeters shift too suddenly, they can be deadly. Especially to sensitive SPS who are prone to RTN.

RTN, or Rapid Tissue Necrosis, can be caused by many different things and the only thing it seems people agree on is that RTN is the death of the colony characterized by the rapid peeling away or necrosis of the flesh of the coral from the skeleton. Whatever the technical definition, it is painful to watch. Especially if you have no clue what is causing it. One of the first tanks I purchased was an established 180gal mixed reef tank, with large healthy colonies of both SPS and Devils Hand leathers. Three very large, very healthy leather colonies. The tank was 5 hours away and had to be transported and re-established. Needless to say, this did not go smoothly. A few days after the transport, the tank went through a crash, with the leathers sloughing layers of mucus and the subsequent death of every piece of SPS in the tank. Massive water changes were done, the filter material beefed up and the tank pulled up and stabilized. For those of you who have been in the hobby for a while, you’re probably thinking “well sure, every tank is going to go through a cycle when moved, that’s what caused it, not the leathers” and you could very well be right. But months later, when the whole tank had been recovered for a while, corals and fish were thriving, growing, I still could not sustain any stick in the tank. I tried frag after frag (should have got a clue, I know. They were just so pretty!) only to watch them melt away, one after the other. I researched everything I could about Rapid Tissue Necrosis and tried one hearsay remedy after the other. Nothing worked. Over time two SPS colonies were able to survive, but their growth was slow and stunted. Of course, I had heard about the abilities of the devils hand leathers to secrete a mucus that is toxic to other corals, but no one had actually presented proof, no cold hard explanation of what caused it, why, and what the effects were on other corals. Besides, all corals can secrete “toxins”, right? So what makes the Devil’s Hand special? The toxins Lobophytum produces are called terpenoids and these little buggers are so potent they are being researched as a potential treatment for cancer (http://www.sciencedirect.com/science/article/pii/S2211383512000676). When Devils Hand leathers are irritated or annoyed, they slough off a layer of mucus that contains these terpenoids. Unless a tank has a large enough water volume to successfully dilute this mucus, or a ton of carbon to rapidly filter it out, it will find other corals and, well, decrease it’s competition in the tank. My tank had enough biological and mechanical filtration to ensure an otherwise thriving reef tank, but not enough to remove toxins from three very large colonies. I finally was at the house of one of the board members of my local reef club and mentioned my problem keeping SPS alive in that tank. He casually replied “oh yah, leathers will do that. I had one in that tank (gesturing to his beautiful mixed reef tank) and it went nuclear and crashed the whole tank. Lost thousands of dollars of corals.” Well, that was all I needed to hear. I had been on the fence about removing my leathers because one of them was the rare version of a true green devils hand, but after hearing that, I made the decision I would rather have stony corals. My tank got a makeover. I took apart the rockwork enough to get to the rocks the leathers were anchored to and broke hunks off them with a hammer and chisel. I found someone who wanted a softy tank and said “enjoy!”. I was letting the tank process the toxins out before I added more SPS, but in that time the two SPS’ that had survived absolutely took off. Since then I’ve been able to add more sticks and they are doing great. If softies are for you, awesome, congratulations, I can understand that. And if you can manage to have a tank with both sticks and leathers, congratulations, you have beaten Russian Roulette. For now. For everyone else, I say pick your poison and stick with it, because mixing only leads to heart ache. Right now, I’m just thankful the devil’s hand is out of my tank.