Rare and beautiful Pterogobius from Japan 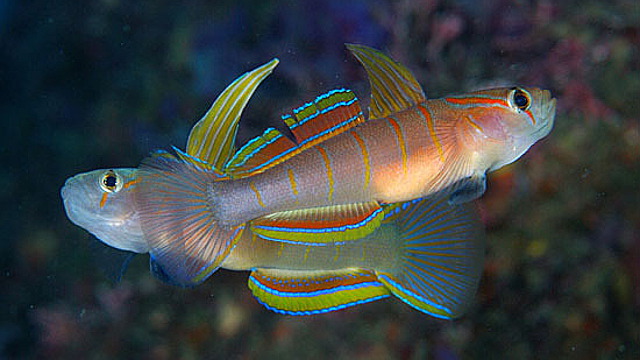 There’s something about the waters of the Pacific Northwest that seems to encourage the creation of unusually beautiful species. Centropyge interrupta… Cirrhilabrus lanceolatus… Tosanoides flavofasciatus… It’s as if the reefs of Japan are showing off to the rest of the Indo-Pacific, making it known that none can rival their pulchritudinous piscines. Which brings me to Pterogobius, a genus of goby-like fishes found only in these waters. Though they are often amongst the most numerically abundant of fishes in their natural habitat, within the aquarium hobby these are as rare as they are beautiful.

Part of the reason for their obscurity lies in the fact that none of the four species in the genus occur outside of subtropical regions of Japan, Korea and China. But, considering that other Japanese endemics from these same waters get collected for aquarists with some frequency (e.g. Centropyge interrupta, Chaetodon daedalma), perhaps their continued rarity in the hobby has more to do with a lack of perceived demand and the limited availability of Japanese fishes in general.

Phylogenetically speaking, these are not gobies, at least, not in the sense that contemporary researchers define that term. As I’ve written about elsewhere, fishes which we think of as being “gobies” fall into a pair of deep evolutionary lineages, each now given a family-level classification. The majority of species found in the marine aquarium hobby are best thought of as “true gobies”, being placed in the family Gobiidae, while the other family, Gobionellidae, houses a mix of superficially similar fishes which tend to occur in non-reef environments, Pterogobius being one such example. So, from an aquarist’s perspective, the closest relatives you might be familiar with are some of the seldom seen members of Gnatholepis and Ctenogobius, as well as freshwater taxa like Stiphodon, Rhinogobius and Gobioides.

Of the four species of Pterogobius, the one with the most potential as an aquarium inhabitant is perhaps P. zonoleucus. This attractive little fish looks and behaves remarkably like the distantly related dartfishes (Ptereleotris), which is presumably why these two genera share such similar scientific names. Known as the Whitegirdled Goby, it can instantly be recognized by the distinctive vertical bars along its sides, as well as the beautifully patterned dorsal and anal fins. The dorsal fins seem to be sexually dimorphic in the same manner observed in other goby groups (e.g. Stonogobiops), with males developing increasingly exaggerated proportions to the spinous portion of this fin. Males are generally the more vibrantly colored sex, showing better definition to their patterning and a greater saturation in colors. A male, fully flushed in its sexual garb, is a spectacular sight to behold.

The maximum reported size of ~7cm is again very dartfish-like, as is their habit of hovering in groups close to the bottom, feeding on passing zooplankton (primarily calanoid copepods). Public aquaria in Japan have created attractive displays of this species, as seen in the video above, but it is all but unknown outside the region, only sporadically trickling into aquarium exports, and only then in small numbers. The logistics of creating a decently sized shoal of P. zonoleucus is, sadly, quite unfeasible for the home aquarist.

Despite its low taxonomic diversity, Pterogobius presents a remarkable amount of ecological diversity. Compare the zooplanktivorous lifestyle of the previous species relative to the Maiden Goby P. virgo, a fish which lives in pairs along the benthos, sifting polychaete worms from the sandy sea floor in the same manner independently arrived upon in distantly related gobiid groups like Valenciennea, Amblygobius and Istigobius. Even its appearance has emulated these fishes, having an orange stripe running lengthwise along the body rather than the numerous vertical bars of its congeners. This would surely make for a popular aquarium fish, but, alas, it is seldom available. And, even if it were to be more vigorously targeted by aquarium collectors, this species, like the rest of its genus, is really more suited to a subtropical system and not the balmy temperatures most aquarists run their tanks at.

The last species to discuss are P. elapoides and P. zaccales, which share a color scheme of black bars on a white body. While generally similar in appearance, the two are easily distinguished when seen side by side, as there are obvious differences with regards to the nuances of their patterns. Both are associated with relatively shallow shorelines, where they flick around the bottom looking for their crustaceous prey. P. zaccales, known as the Beauty Goby, lives something of a dual life. Juveniles occurs in small groups, feeding primarily on copepods gleaned from their boulder-strewn habitat, but, as they grow larger, they also grow increasingly solitary, eventually becoming quite territorial of their crevice of choice. The feeding ecology also switches, as they begin to favor a diet heavily comprised of amphipods taken from the sandy regions between the boulders.

The Serpentine Goby P. elapoides lives a similar, albeit less territorial existence. It too switches from a semipelagic lifestyle to a more benthic one with increasing size, showing the same dietary change from copepods to amphipods. While these two species share much in common, they appear to occupy somewhat different habitats in the wild, with elapoides favoring a more algae-rich niche compared to the rockier realms favoured by zaccales. Both are occasionally seen in captivity, but rarely outside of Japan. It’s a shame this genus isn’t more widely known and widely available. Each species provides a beautiful and unique take on what it means to be a goby (or, rather, a gobionellid). From the dartfish-like leucozonus to the sand-sifting virgo and the attractively patterned elapoides and zaccales, this genus offers a little bit of everything for the goby connoisseur.