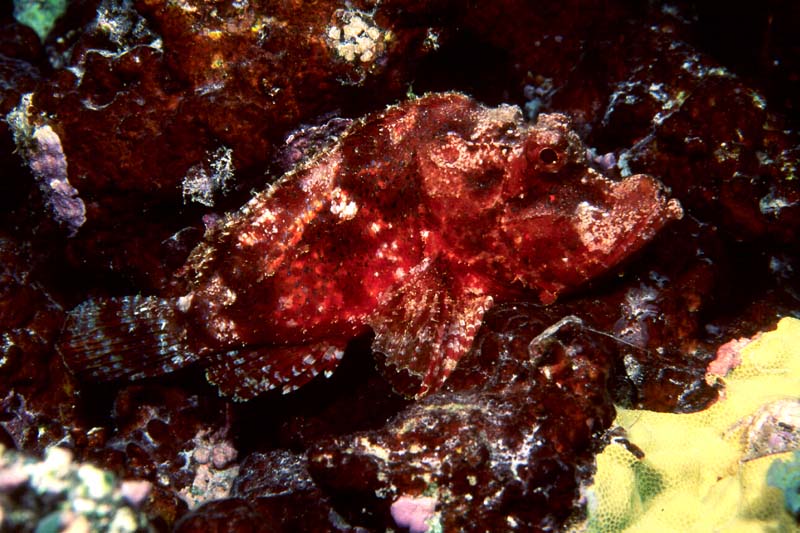 R. xenops is found from the Hawaiian Archipelago, north to Midway Island, though it may also occur at nearby atolls like Wake Island and Johnston Atoll. This is the only species in the genus which occurs in Hawaii; compare that to Japan, where no less than five distinct species abound. This Hawaiian species shares with argoliba and cea a higher pectoral fin ray count. It occurs more shallowly (~25m) in the cooler waters of the Northeastern Hawaiian Islands and deeper in the larger islands (<60m) of Hawaii. 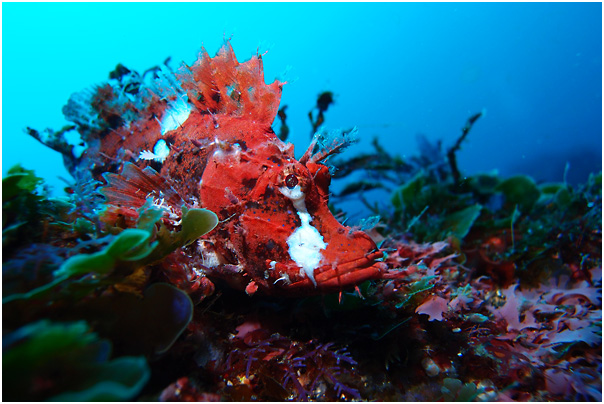 The white markings appear to be somewhat consistent, though see the erythric specimen below. Credit: atopapa

Known from Japan (Kashiwajima, Sagura Bay, Ryukyu & Izu Islands), Taiwan, and the Macclesfield Banks of the South China Sea. Depth range may be shallower in Japan (as shallow as 10m), while specimens outside Japan are found from 50-80 meters. 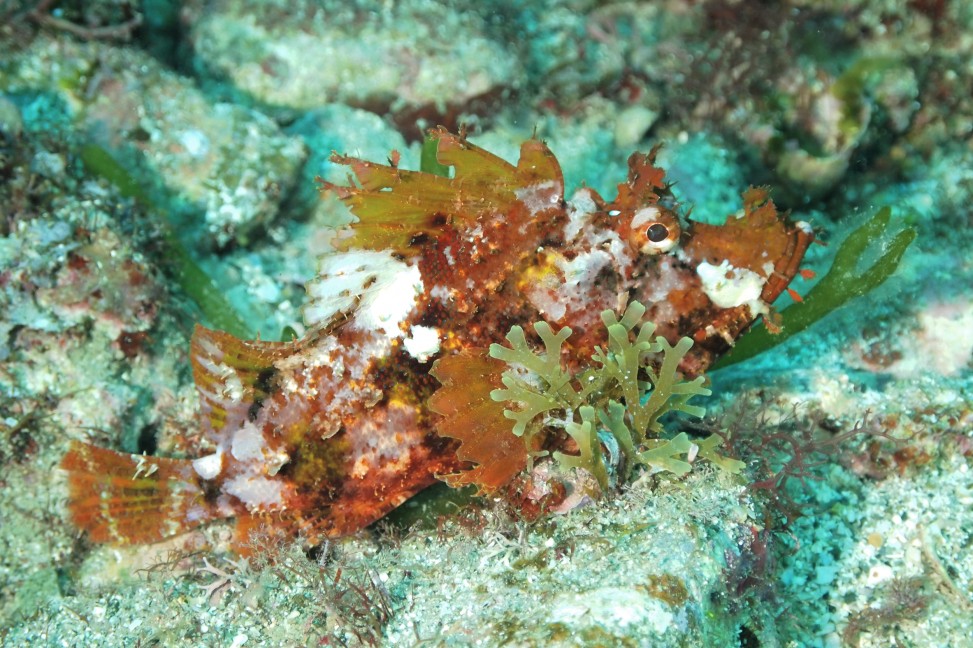 It’s uncertain if this species is truly the same as the Hawaiian xenops. While examined specimens have similar morphological measurements, there are some consistent color differences, even given how variable these species are to begin with. Hawaiian specimens seem to lack the white markings beneath the eye and dorsal fin which are common to these Asian populations. Furthermore, Hawaiian specimens have less of the reddish hue than their Asian counterparts. 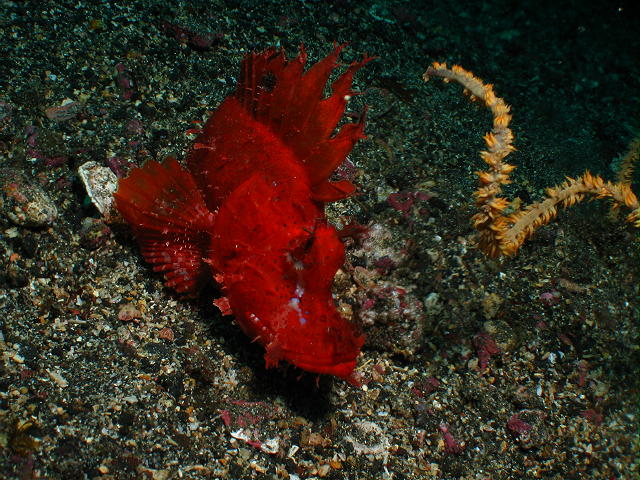 This species has an overlapping biogeography with argoliba, but I have yet to see these two species photographed in close proximity. My suspicion is that these occupy different habitats or niches, though precisely what these are I couldn’t say. R. argoliba is easily confused with the co-occurring cf xenops, but differs in its lower dorsal fin, less-mottled coloration and reduced skin ornamentation. 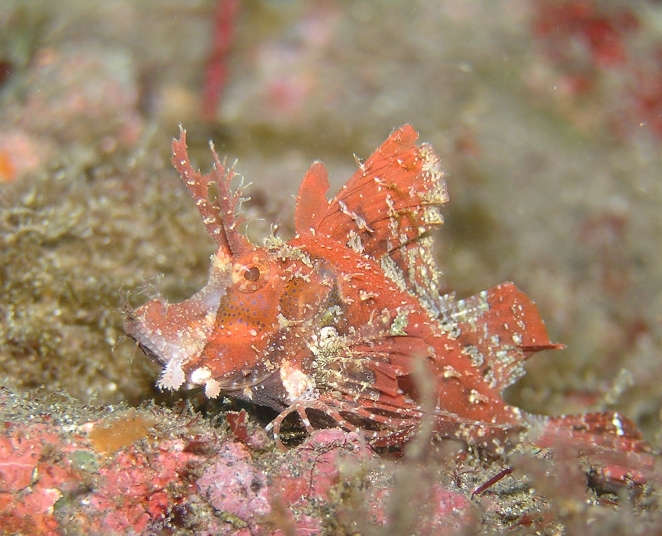 Reported from the Philippines, Bali, Lembeh and Milne Bay, and Northwest Australia. The images here extend the range through Japan. Known from 20-100m. 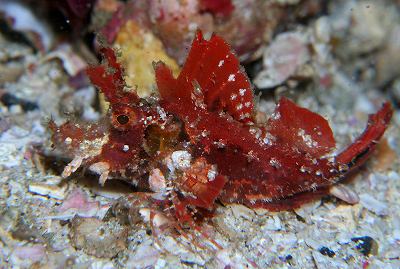 This is a poorly-known species, and there is significant taxonomic confusion regarding its generic placement, with some sources treating this as belonging within the monospecific genus Hipposcorpaena and others placing it within Rhinopias. There are only minimal differences between the two, with the most obvious being the gurnard-like modification to the pectoral fins. Genetic study will likely be required to elucidate the situation. It’s possible these Japanese specimens are distinct from the Coral Triangle population and deserve species recognition of their own.
[youtube https://www.youtube.com/watch?v=VGJNuZ5gNVw&w=420&h=315]

The holotype (and only) specimen. Credit: Eschmeyer et al 1973

Known form a single 55mm specimen collected in the Seychelle at 67 meters.

Reported to be yellow, with red-tinged fins. The morphology is nearly identical to Rhinopias (where it might eventually be placed when more specimens become available), but the eyes are less elevated, and there is an unusual barbel medially on the tip of the lower jaw. This species could be expected to occur in Mauritius and possibly Madagascar or Kenya, all areas with aquarium fish collection. 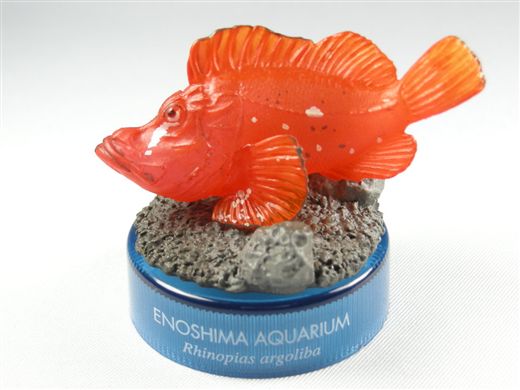