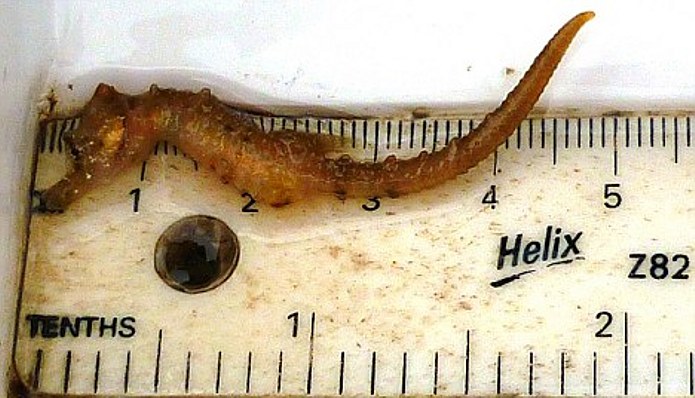 This 5 cm seahorse, Hippocampus hippocampus, was found on a routine survey of the River Thames.

This seahorse, Hippocampus hippocampus, (pictured above) was discovered at Greenwich, London, and was just 5 cm (2 inches) long.  This is the farthest upstream this species have ever been recorded.  Adult H. hippocampus can reach up to 15 cm (6 inches) long so the length of the juvenile captured this past Friday suggests that there is a breeding population somewhere in the vicinity.  The location of this find is roughly 10 miles farther upstream from where they were last spotted in 2008 near Daganham.

Emma Watson, fisheries officer for the Environmental Agency, was quoted as saying: “This is a really good sign that seahorse populations are not only increasing but spreading to locations where they haven’t been seen before. We routinely survey the Thames at this time of year and this is a really exciting discovery.  We hope that further improvements to water quality and habitat in the Thames will encourage more of these rare species to take up residence in the river.”

The Thames, once described as a “biologically dead” river due to sewage and industrial population, has made significant progress in becoming a cleaner waterway thanks to decades of environmental management.

Officials reported that after the above specimen photo was taken that the seahorse was released unharmed back into the waters of the Thames.

The Thames at Greenwich: Not where you would expect to find a breeding population of seahorses!