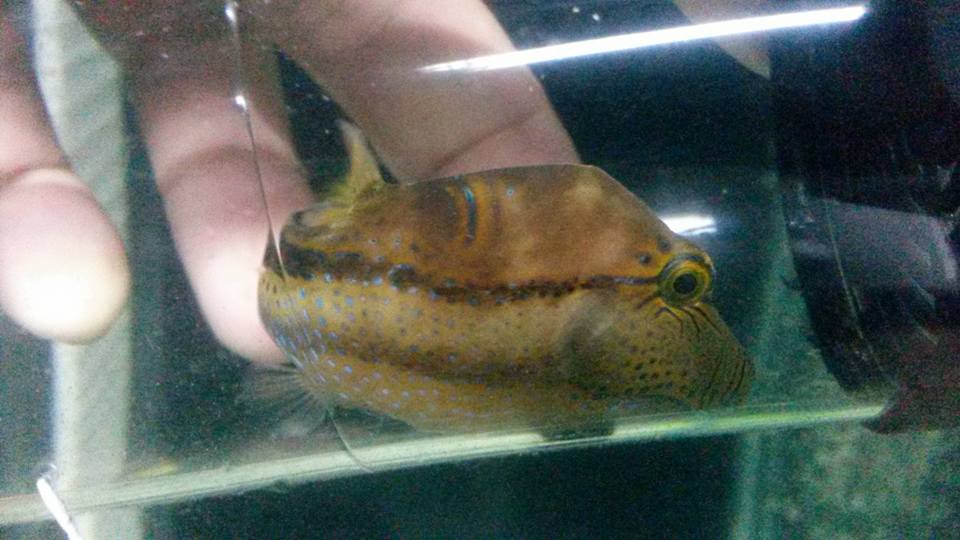 The sharpnose pufferfishes (Canthigaster) are a diverse lot, with dozens of species scattered across the world’s tropical waters. While a handful of taxa regularly make their way into the aquarium trade, many remain poorly known and are seldom collected. One of the least-documented members is a shallow-water species hailing from the Gulf of Guinea in Western Africa. These poorly explored rocky reefs have a unique fauna home to a large number of endemic fishes (some still awaiting scientific description), and it’s from here that the rarely seen Canthigaster supramacula was recently collected and made its way to Iwarna Aquafarm in Singapore. 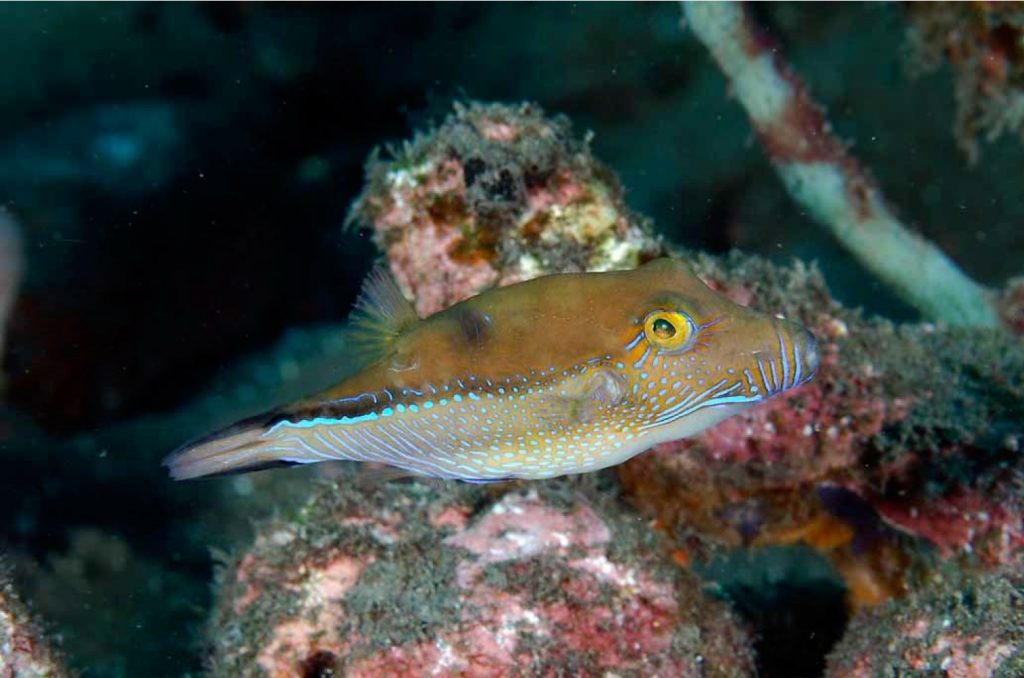 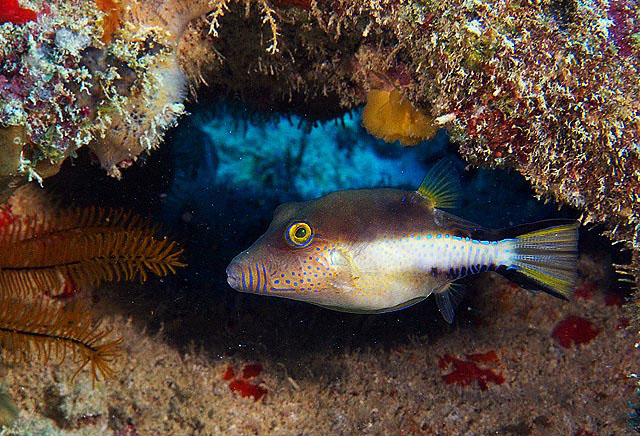 At first glance, it would be very easy to mistake this fish for Canthigaster rostrata, a commonly collected species from the West Atlantic (in fact, it seems the aquarists at Iwarna Aquafarm made just such an oversight with their specimen). Adults of these two geographically isolated taxa are, as best I can tell, identical in outward appearance, and it seems that the only reliable way to delimit them is by knowing where a given specimen originates from. When C. supramacula was described in 2002, the only known specimens were juveniles measuring just 40mm in length. At this small size, this species (as well as its closest relatives) has a large black spot on each side of the body anterior to the dorsal fin. This marking is alluded to in the species’ epithet—supramacula roughly translates from Latin as “ upper spot”—but, as this fish enters adulthood, its namesake maculation disappears entirely, giving way to a beige coloration across the back. 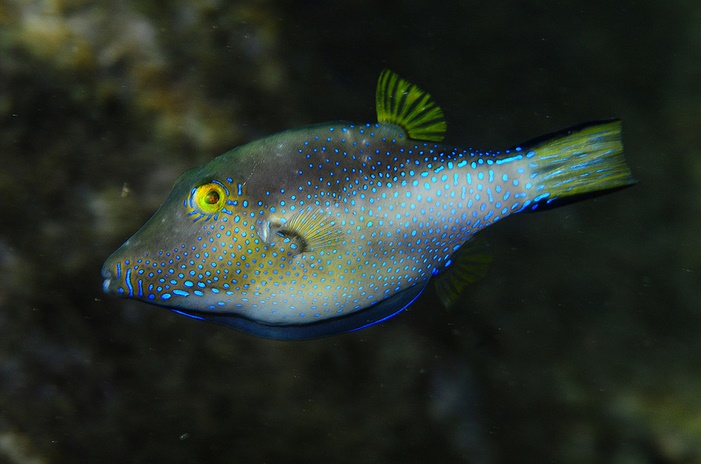 An excited specimen of the Macaronesian Sharpnose Pufferfish (C. capistrata). Note the blue spots of the caudal peduncle, which coalesce into parallel striations in C. rostrata and C. supramacula. Credit: Sirgfreid

With shipments from West Africa being so uncommon in the aquarium trade, it’s likely that this is one of the rarest pufferfishes in captivity, though whether this is truly the first time it has been collected for aquarists (or merely the first time it has been recognized) is hard to say. Even less-attainable is another closely related sharpnose pufferfish, C. capistrata, found further north at Madeira, the Azores, Cape Verde and the Canary Islands. This fish is a spitting image of its West African and West Atlantic brethren, but it differs in having a dense array of fine, blue spots along the lower sides in adults (vs. posteriorly striated in C. supramacula and C. rostrata). 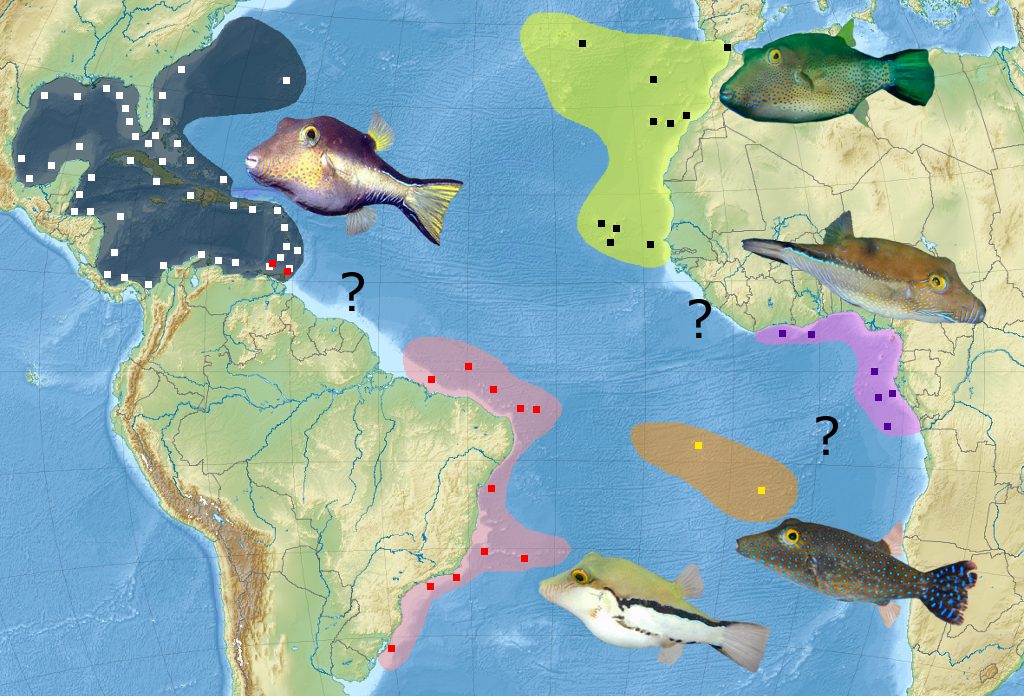 The map shown here, from my upcoming review of this genus, gives an idea of where these various taxa occur, including the last two members of the group: C. figueroidei from South America and C. sanctaehelenae, a divergently patterned beast from the remote islands of the Central Atlantic. It’s not hard to look at these distant populations and see the gears of evolution turning. The subtle nuances which serve to differentiate them hint at a fairly recent split within the group, but precisely when this might have occurred will be unknowable until genetic study is undertaken. Of particular interest is the unusually patterned species found right in the middle. Isolated reefs seem to act as crucibles for evolutionary novelty, on account of their small, inbred populations. In such an environment, a mutation which might get diluted out of a more robust and genetically diverse species can quickly become dominant. A fine example of this is the famed Koi Queen Angelfishes (Holocanthus ciliaris var.) reported from St. Paul’s Rock, another remote speck of land in the Central Atlantic. There’s no word on what the sharpnose pufferfishes look like there, but I imagine they’ll share the same spotted motif seen in the weird little mutants from St. Helena and Ascension Island.