A female “Hemiulis” cf chlorocephalus, illustrating the striped appearance common to so many of these fishes. Credit: ベラ職人

The many colorful wrasses of the genus Halichoeres represent some of the most popular fishes for the reef aquarium, including such familiar names as the Christmas Wrasse, Melanurus Wrasse, Canary Wrasse and rarer beauties like the Earmuff Wrasse. With roughly 80 species to its name, the genus is the largest in the wrasse family and includes a great many species which possess confusingly similar color patterns. In particular, some two dozen species share a similar pattern of red and green stripes, rendering identification a difficult task for most aquarists. To help make life easier, I present a simplified photographic guide to this challenging group…

First, we must begin this discussion with a pedantic note on this group’s taxonomy. Halichoeres is a mess at the moment. Molecular study has confirmed what has long been suspected—this genus does not represent a single evolutionary lineage but, rather, a mix of species which happen to share similar morphological characteristics. This is hinted at in the wide range of body shapes, ecologies and biogeographies contained within the current definition of the genus. 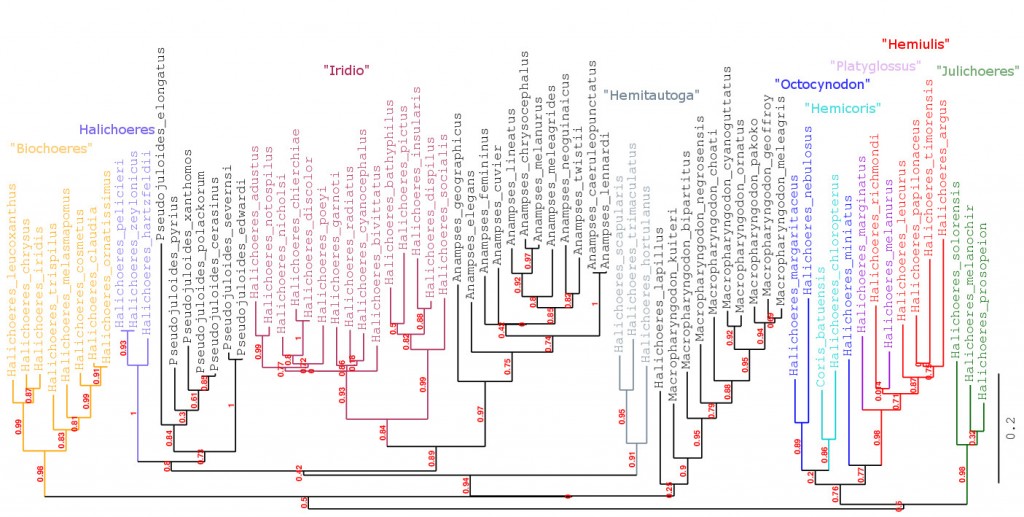 Phylogenetic tree of julidiine wrasses based on cytochrome oxidase 1 (genbank). Note that most of the basal branches are poorly resolved in this study, indicating a need for more diverse sampling to fully understand how the different ex-Halichoeres are truly related to one another. Click to enlarge.

The phylogenetic tree above illustrates the numerous distinct branches of Halichoeres, which corroborates nicely with earlier studies by Barber & Bellwood and Westneat & Alfaro. A great deal of work remains to be done before we fully understand how these fishes interrelate, but several major lineages stand out as distinct groups which likely need to be recognized as separate genera. In his monumental tome on wrasses, Rudie Kuiter laid out a framework for this, going so far as to coin several new names. While many of these changes appear warranted, others don’t, and the scientific community has mostly ignored his work. However, since Kuiter’s book is popular amongst aquarists and his names have gained at least some traction here, I will include this nomenclature in quotations.

This clade (first named by Kuiter) has been widely recognized in molecular and morphological study and includes several popular aquarium fishes. Aside from the “Christmas Wrasses”, there is a widespread Indo-Pacific group of yellow species (African iridis, Indian leucoxanthus, Pacific chrysus) and a more rarely seen group of pink fishes (Indian trispilus, Pacific pallidus, Pacific melasmopomus). The true Christmas Wrasses form a group of four geographically isolated species formerly united under the name H. ornatissimus (now restricted to Hawaii). Unfortunately, this common name is applied in the aquarium hobby to any number of species displaying a superficially similar color palette of red and green. 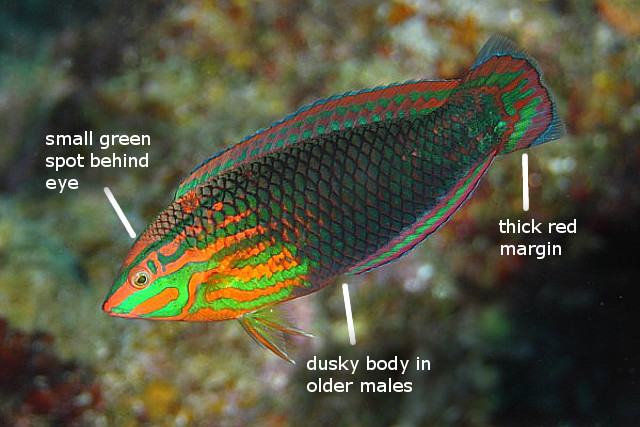 Twospot Wrasse “Biochoeres” biocellatus Also known as the Red-lined Wrasse and False-spot Wrasse. Found in a variety of weedy and coral reef habitats in the West Pacific. Its dingy color scheme leaves this species a rarity in the aquarium trade. Credit: Takeru Tsuhako 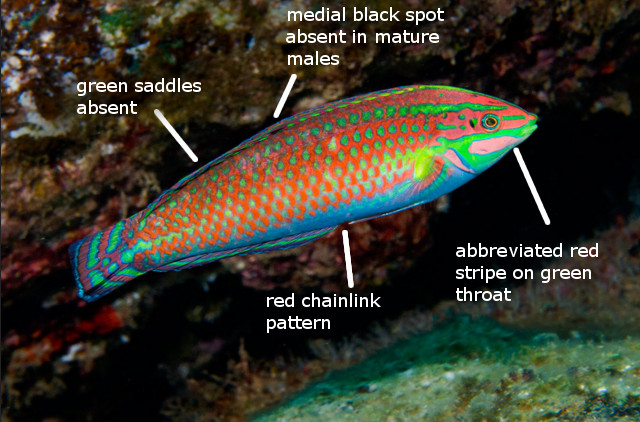 Christmas Wrasse “Biochoeres” ornatissimus A Hawaiian endemic with arguably the most attractive patterning of red and green in the genus. Specimens are regularly available from Hawaiian collectors, where they are found on shallow reefs. Credit: Chuck Babbitt 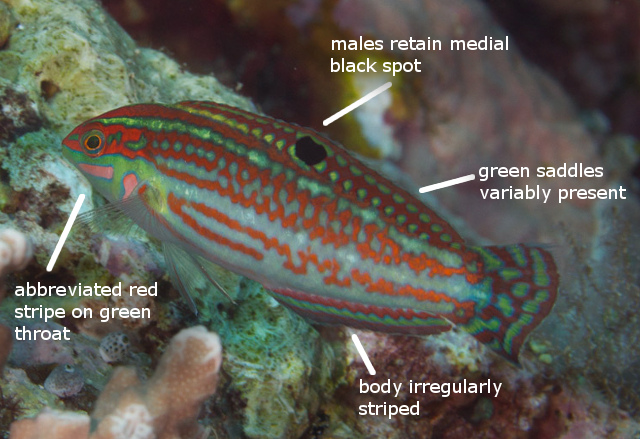 Claudia’s Wrasse “Biochoeres” claudia This recently recognized species is in some ways a poor man’s ornatissimus, being cheaper and somewhat less ornately patterned than the true Hawaiian endemic. This is an abundant species in the aquaruim trade, where it is often passed off under the common name Christmas Wrasse. Named after Claudia Rocha, wife of taxonomist Luiz Rocha… chivalry is not dead. Credit: Mark Rosenstein 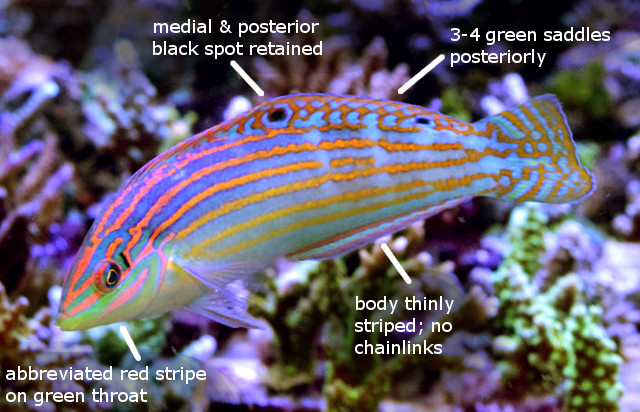 Adorned Wrasse “Biochoeres” cosmetus This is the Indian Ocean species in the Christmas Wrasse species complex, reported as abundant in the Maldives, from where aquarium specimens regularly appear. Specimens from the African coastline likely warrant investigation as a possible cryptic species. Credit: xdave 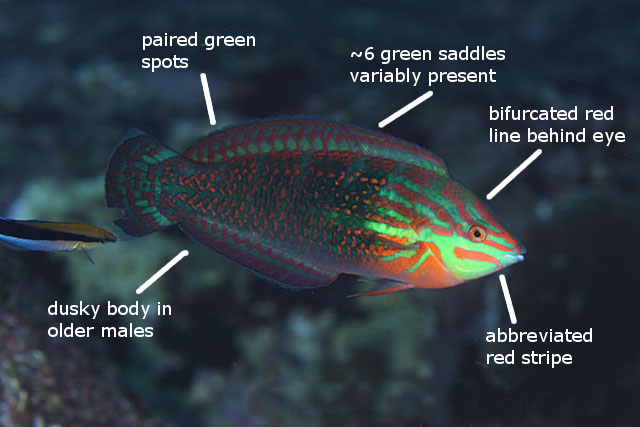 Green-cheek Wrasse “Biochoeres” orientalis This dusky variation on the Christmas Wrasse occurs from Japan to Taiwan and likely further south into the Northern Philippines. It’s bright green cheek is said to be distinctive. It’s doubtful if this species has ever appeared in the aquarium industry (at least outside of Japan). Credit: kazu

The other major clade of Indo-Pacific Halichoeres is likely to be only a distant relative of the type species for the genus (H. zeylonicus), with the oldest available name for this diverse group being Hemiulis Swainson 1839. Kuiter subdivided these further (“Platyglossus”, “Octocynodon”, “Julichoeres”), but such excessive splitting seems unwarranted here and these names are perhaps best treated instead as subgenera. 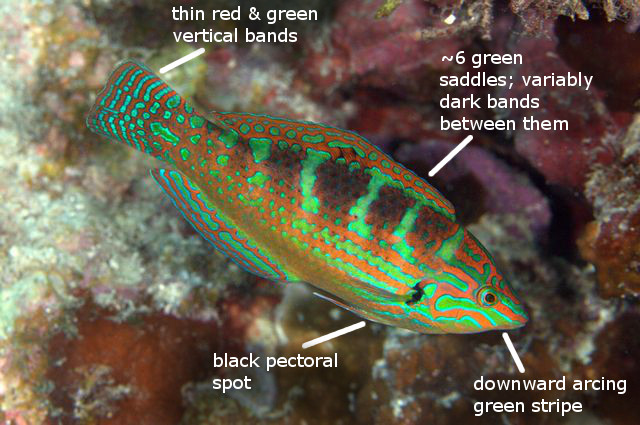 Saowisata Wrasse “Hemiulis” binotopsis Named for the Sao Wisata dive resort in Flores, Indoenesia, this species ranges throughout the Coral Triangle. Known from shallow reefs dominated by soft corals and algae. Not seen with much regularity in aquarium exports. Credit: brucelee 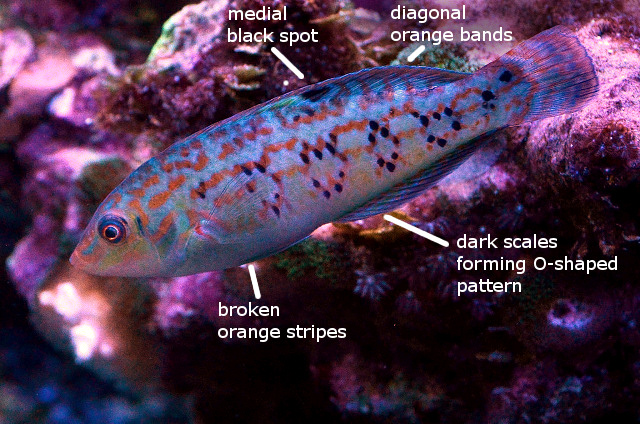 Timor Wrasse “Hemiulis” timorensis The Indian Ocean counterpart to H. binotopsis, differing in the broken stripes which often form a series of O-shaped markings along the sides. An occasional aquarium export from shallow coastal reefs rich in soft coral growth. Note that this specimen is likely a large female. Credit: Hunter Hammond 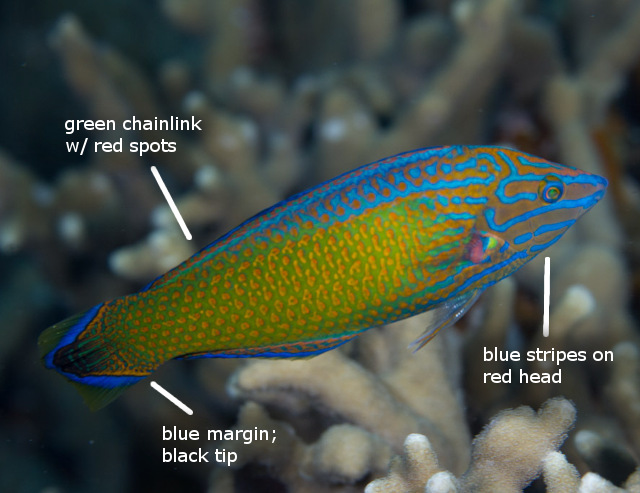 Chain-line Wrasse “Hemiulis” leucurus Also known as the Grey-head Wrasse, this species is found throughout the West Pacific from protected coastal reef slopes with lush coral and algal growth. The body color can vary from green to teal to yellow. This species appears sporadically in aquarium exports, often misidentified. Credit: Mark Rosenstein 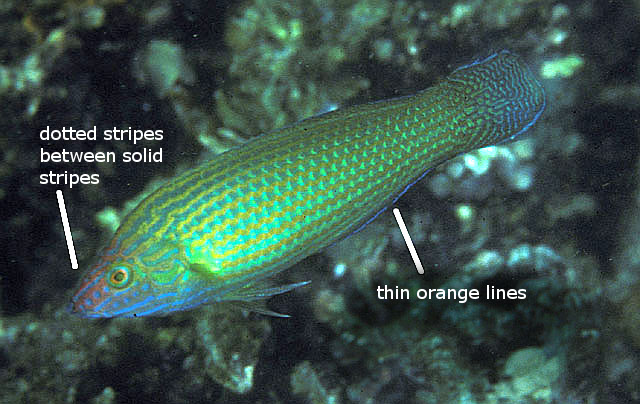 Pinksnout Wrasse “Hemiulis” kallochroma The Indian Ocean counterpart to H. leucurus, reported from the Mentawai and Similan Islands. Few photos of this fish exist and it is unlikely to have been collected for aquarists. Credit: John Randall 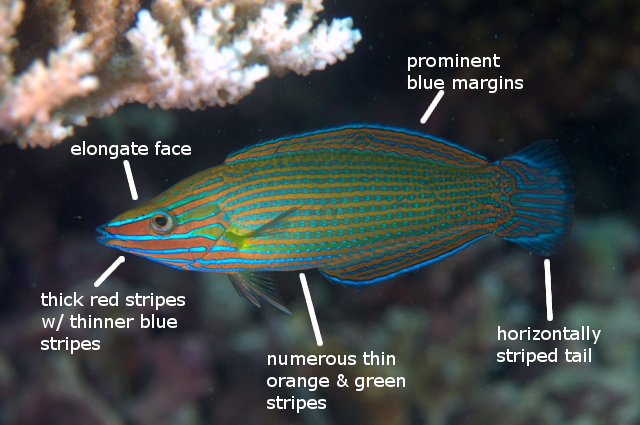 Richmond’s Wrasse “Hemiulis” richmondi A readily recognizable species with vibrant colors and an unusually attenuated face. Reported only from Indonesia and the Philippines, this species is an uncommon offering in the aquarium trade, often far more delicate upon arrival than others in the genus. Said to occur in shallow reefs with abundant soft corals. Females with similar stripes along the body and a pair of black ocelli. Credit: brucelee 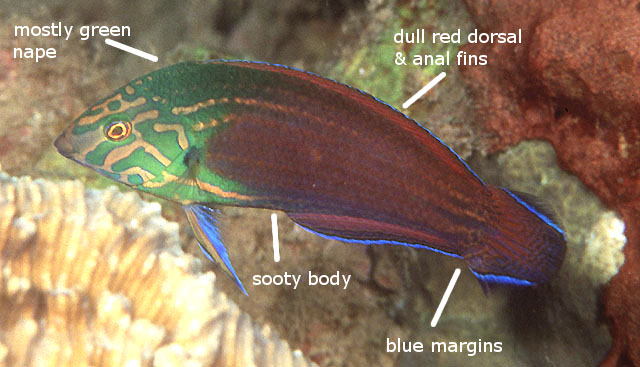 Green-head Wrasse “Hemiulis” chlorocephalus This species (as well as a similar fish from the Philippines and rubricephalus from Indonesia) form a distinctive group of parapatric species which favor deeper reefs than others in this genus. Females of all three are essentially identical and strongly resemble those of H. melanurus (but with an additional black ocellus in the soft dorsal fin). Known only from Papua New Guinea and apparently uncollected for the aquarium trade. Changed to “chlorocephala” by Kuiter to match gender of new genus. Credit: John Randall 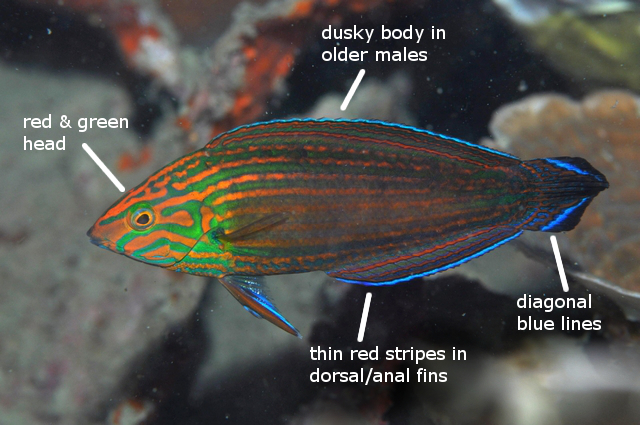 “Hemiulis” cf chlorocephalus Known only from the Philippines, this fish appears to differ from the true New Guinean chlorocephalus in having the body and fins less sooty, allowing the underlying pattern to show through. Unfortunately, photographs of both are few in number, so it is difficult to determine how variable this is. Kuiter referred to this fish as the Orange-head Wrasse, though it’s likely he had just observed a large female, as this specimen clearly shows a green head as in the true chlorocephalus. Still, this group appears to show a common pattern of Coral Triangle speciation in which the Philippines population would be expected to differ at a species level. Credit: brucelee 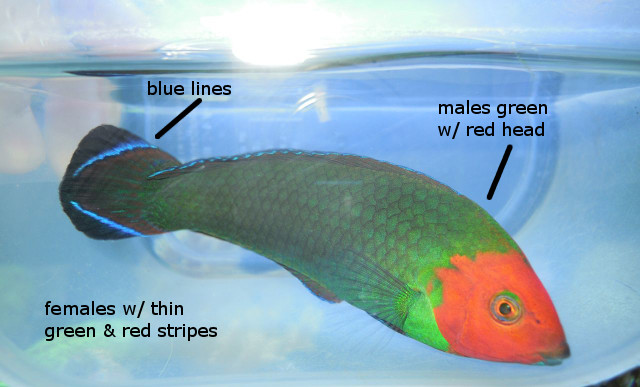 Red-head Wrasse “Hemiulis” rubricephalus A brilliant and distinctive species that has become more common within the aquarium trade in recent years, though healthy specimens are often few and far between. Known only from Flores and the Banggaii Islands, likely more widespread in the Banda Arc. Females look identical to those of H. chlorocephalus and cf chlorocephalus. Changed to “rubricephala” by Kuiter to match gender of new genus. Credit: Penguin Village 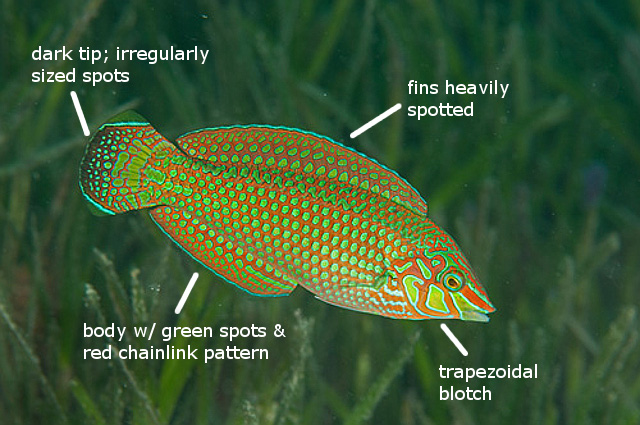 Argus Wrasse “Hemiulis” argus Named after the mythical Greek monster Argus Panoptes (said to possess 100 eyes) in reference to the many green spots along the body and fins. Colors varies based on habitat (greener in seagrass beds). Males often develop a darker back. Known from shallow weedy habitats of the West Pacific. Credit: kazkian 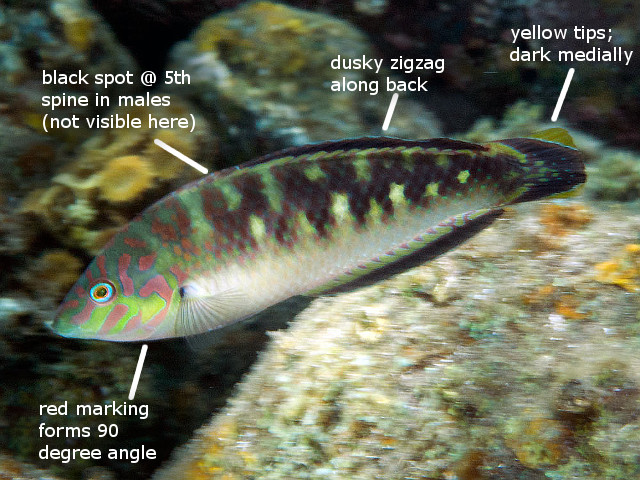 White-button Wrasse “Hemiulis” nigrescens The pale spots along the midline are a useful identifying trait, though these are more apparent in females. Said to be the most abundant wrasse in Hong Kong from “shallow areas of coral and boulders.” Known from Africa to the West Pacific, Kuiter questionably treats the Indian Ocean population as a separate species (H. dussumieri), though it’s not clear what traits serve to distinguish the two and other authors continue to treat them as conspecific. Being a relatively drab fish, this species is mostly absent from the aquarium trade despite its abundance in the wild. Credit: Andrey Ryanskiy 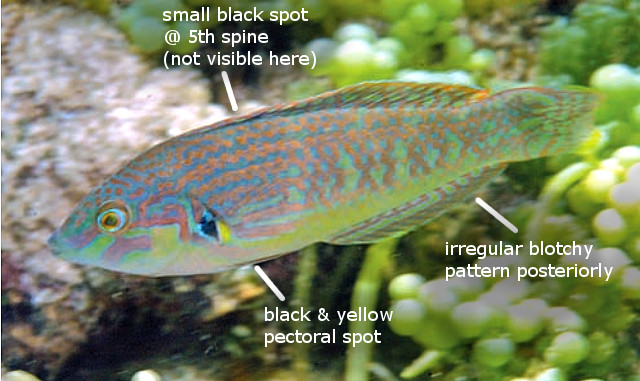 Erdmann’s Wrasse “Hemiulis” erdmanni Described in 2010, this species was previously confused with another from shallow, silty habitats, H. nigrescens. Records are from Singapore, Jakarta & West Papua. Due to the marginal habitats it seems to prefer, this species is unlikely to be collected for aquarists. Specimens often show darkly patterned scales along the sides and back, but never so prominently as in H. nigrescens. Credit: Gerry Allen 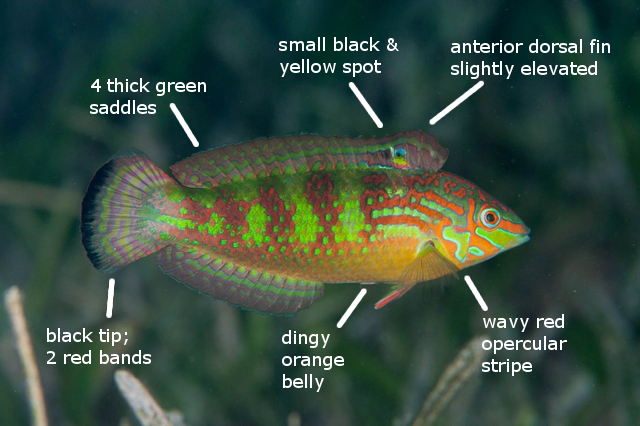 Weed Wrasse “Hemiulis“ papilionaceus Known only from Indonesia and the Philippines, occurring in shallow (<2m) lagoons and reef flats. Said to vary from green to brown based on habitat. An attractive species which seldom, if ever, appears in aquarium exports. Kuiter suggests the correct name is H. schwartzi. Credit: brucelee 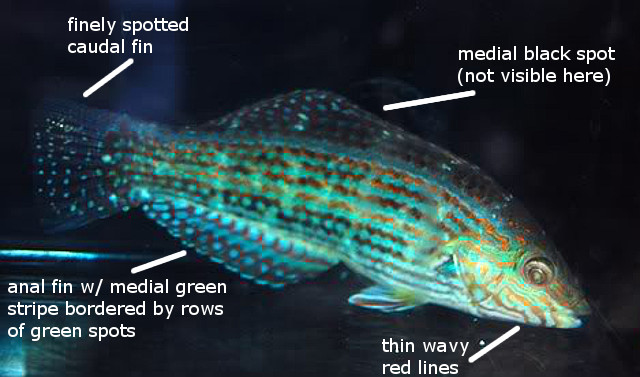 Singaraja Wrasse “Hemiulis“ pardaleocephalus A poorly known species with few existing photographs, somewhat similar to H. argus. Specimens reported from Bali & Sumatra, though it is likely more widespread in the Indian Ocean. Reported from weedy inshore reef flats. Specimens have appeared on rare occasion in the aquarium trade, but it is more likely to go misidentified. The common name is after the type locality in Bali. Credit: Joe Russo 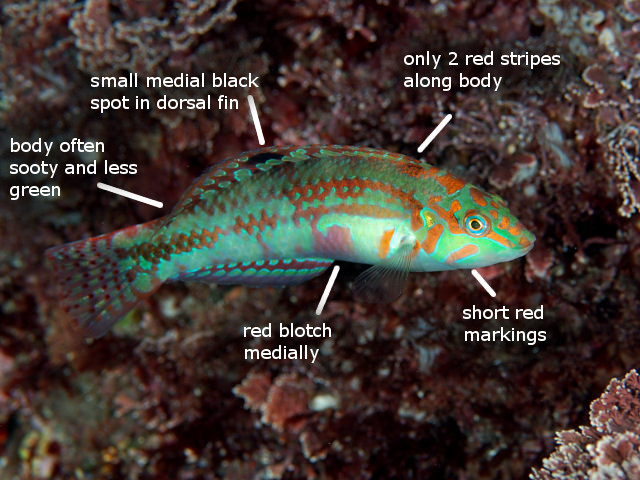 Clouded Wrasse “Hemilulis” (Octocynodon) nebulosus Widespread from the Red Sea to the West Pacific, in shallow water, but also known from waters as deep as 40m. Females with pinker belly than others in this group. All four “Octocynodon” species are known from shallow algal habitats, where their blotchy colors provide camouflage. None of these species are commonly encountered in aquarium exports. Credit: izuzaki 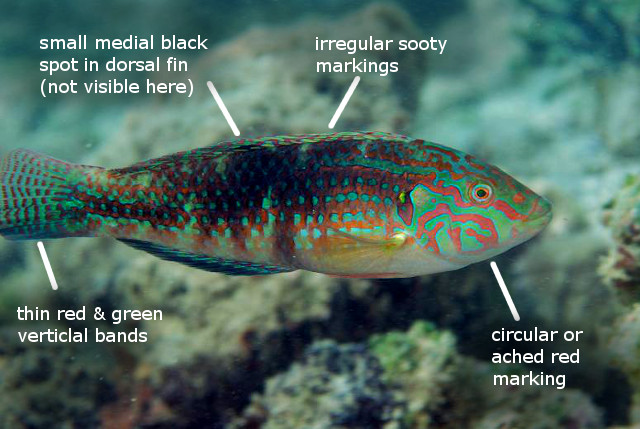 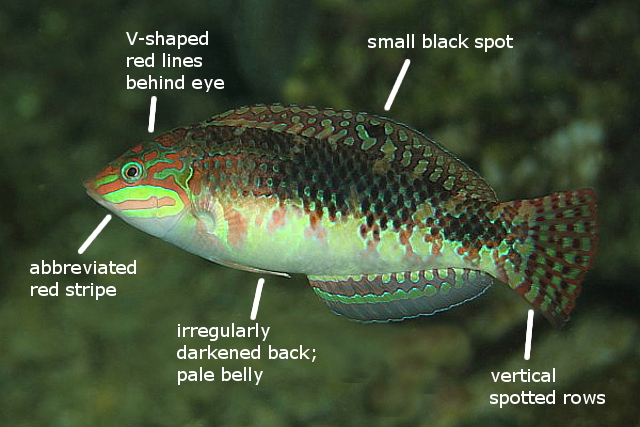 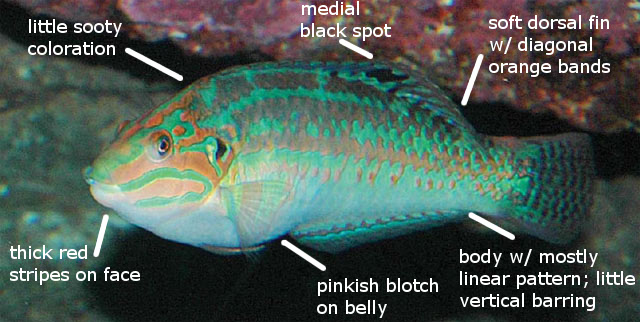 Durban Wrasse “Hemiulis” (Octocynodon) zulu Described in 2009, this species shares the pink belly of its presumed sister H. margaritaceus, but with a more linear and less sooty pattern to the body. Credit: Dennis King 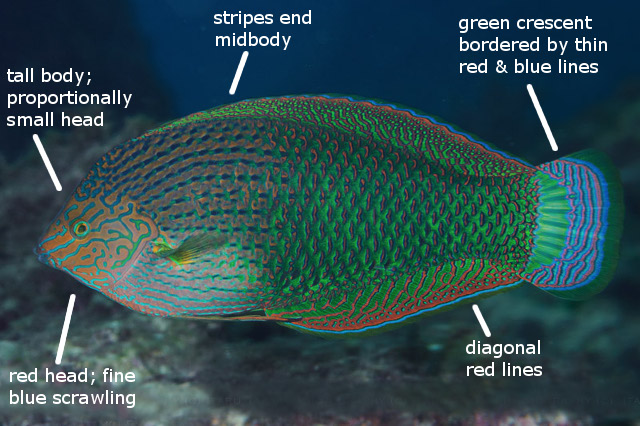 Dusky Wrasse “Hemiulis” (Platyglossus) marginatus A beautiful species with an unusually tall body profile. Males are far more attractive than the dusky females that give this fish its common name. Ranges throughout the Indo-Pacific, but slight color differences hint at this being a species complex. Kuiter recognized the Red Sea (marginatus), African (lamarii) & Indo-Pacific (annularis) populations as distinct. Credit: Itaru Takaku

Tailspot Wrasse “Hemiulis” (Platyglossus) melanurus An abundant species in the aquarium trade, noted for eating pestiferous worms. Note the dark tail tip alluded to in the scientific name (though only mature males possess this). Females are more linearly patterned, with dark spots medially in the dorsal fin and caudal peduncle. Formerly known as H. hoevenii and occasionally offered as Hoeven’s Wrasse. Credit: ベラ職人 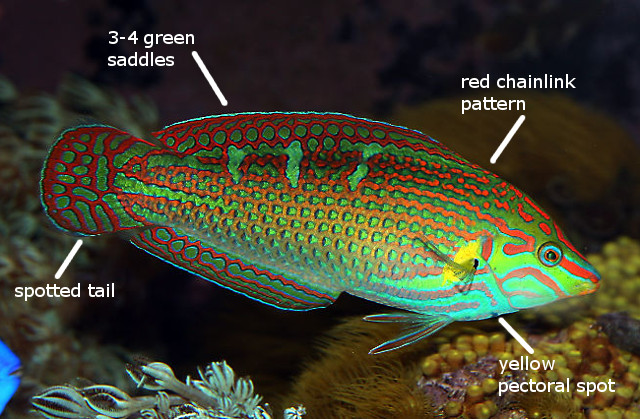 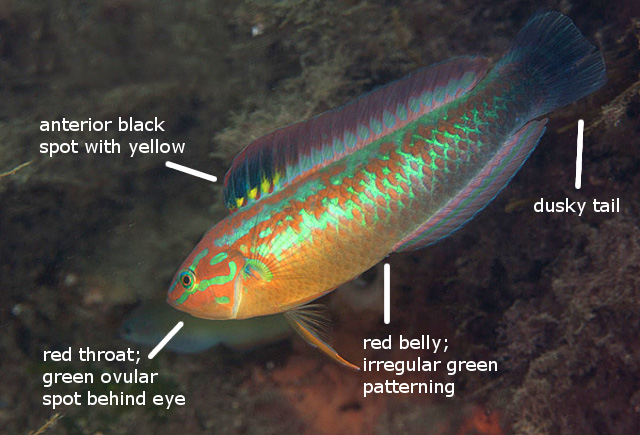 Mottle-stripe Wrasse “Hemiulis” (Julichoeres) tenuispinnis Note the semaphore-like color and shape to the anterior dorsal fin, a trait shared by other Julichoeres. Females are drab and pale comparatively. From subtropical Japan to Hong Kong, associated with algae habitats. Credit: kazu 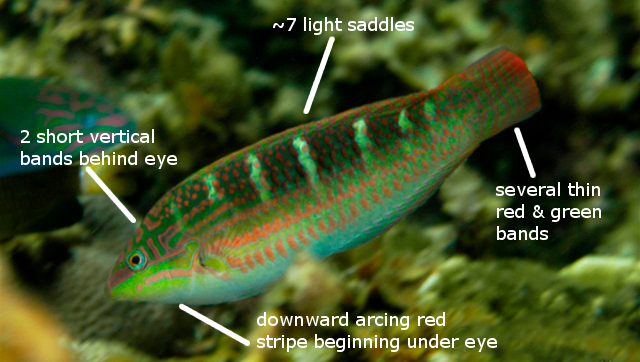