Red Sea has been a trusted aquatics company for decades. They are known for careful science and high production values, releasing products that have been carefully studied. In recent years, Red Sea has turned its attention to making reef aquariums that simplify reef keeping, opening the hobby up to an entire sect of interested consumers, who previously felt reefing was too complex and technical. Years ago, they debuted their MAX series of aquariums. These were some of the first high-end, reef specific, all in one, or “plug and play” aquariums. Every piece of equipment a reef keeper would need was included, and Red Sea promised that everything included in their MAX systems was “Reef Spec,” capable of growing anything from green star polyps to complex SPS species.

Reviews of the original MAX line of aquariums were mixed. Some expert aquarists believed they were a good step toward an easier introduction to reef keeping, while others found nothing but limitations within the MAX aquariums. I purchased a MAX system several years ago to house some corals and fish while completing construction of my house. Overall, the system was a disappointment for me, as it was equipped with a sub-par protein skimmer and very basic equipment, when compared to the advanced reef systems I was accustom too. Making matters worse was the price, which exceeded the cost of a stand-alone aquarium outfitted with higher-performing equipment. Once my fish-room was complete, I moved my reef into a custom designed aquarium system, and gave the Red Sea MAX to a friend who was starting out in reef keeping.

Discussion about the Red Sea MAX erupted in 2013, with the release of the Red Sea MAX C-series aquarium. In 2013, LED lighting was quickly overshadowing older lighting technology, yet the Red Sea MAX C debuted with T5 lighting and still managed to carry a super-premium price. Chatter among aquarists indicated the belief that Red Sea was offering sub-par technology for an uber-premium price, and potentially price-gouging first time reef keepers with promises of an easy to keep, plug and play, reef aquarium. Eventually it led Red Sea to issue a statement, stating that while they want to offer their customers the best quality and technology, their studies showed that T5 lighting was the best method, at the time, to keep anything from beginner corals on up to demanding SPS species. It cooled some of the controversy, and Red Sea likely hoped to put questions about the MAX’s product selection to bed, by adding LED lighting to current MAX models. However, they have raised more eyebrows by stating that red and green LED lights cause excessive algae growth, but including an LED fixture that includes red and green lighting. Red Sea has recommended customers keep the red and green channels on their fixtures off, but it begs the question, are customers getting what they paid for, in an LED fixture that includes and charges for two light colors, with an aquarium manufacture selling a bundled package saying it’s unwise to use those colors over a reef aquarium? 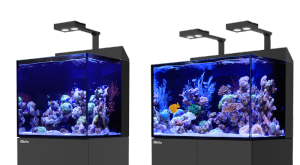 A quick Google search of “red and green LED lights and algae” brings up a host of forum discussion surrounding the topic. Much of that discussion is conjecture, with no real hard evidence to suggest that red and green LED lights will cause cyanobacteria and algae to flourish. Reef keepers have noted that under red and green LED lights, they notice patches of algae, or outbreaks of cyanobacteria across their sand-bed. Some aquarists have questioned why companies like Ecotech and Aqua-Illumination have opted to place red and green LEDs within the cluster of light emitting diodes. During an initial search, the only lighting manufacturer that seems to have an official stance on red-green LEDs and algae is Orphek. Orphek claims their engineers have worked tirelessly to identify the spectrum of lights corals thrive under, and re-create those conditions using LED lighting.

According to Orphek, their engineers determined that corals thrive under a light spectrum of 400-550 nano-meters, and 620-700 nano-meters. Orphek has created lighting that uses less red and blue lighting, to re-create the spectrum they found corals respond best too. Their claim is that by using white LEDs in conjunction with UV producing LEDS, they are able to create a fixture with less blue and red lighting, but still creates a higher than average PAR reading. They claim that by not implementing orange, yellow, or green LEDS, the light spectrum that nuisance algae flourishes under, the threat of unwanted growth is virtually eliminated. Is Orphek right on the money? It’s hard to tell, since actual independent, neutral studies on the topic are hard to find. Most of the information out there is conjecture, guessing and speculation.

We know that plants and algae thrive under red spectrum light, but I don’t think there is any definitive study that shows they thrive when red and green are used to create a specific spectrum or color of light. Many of the LED fixtures on the market today use red and green diodes to aid in the creation of specific lighting profiles. For me personally, I haven’t seen any indication that algae or cyanobacteria grows more under red/green included LED lighting, than it did under metal halide or T5 lighting. The fixture I personally use does have red and green LEDs, which run as part of the lighting profile. 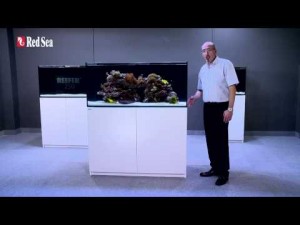 Red Sea has come to the same conclusion as Orphek, that red and green LED lighting does contribute to nuisance algae growth. Oddly enough, they’ve decided to ship their new MAX aquarium with the Aqua-Illumination Hydra 26 LED light, which uses both red and green in their LED clusters. Red Sea’s advice, leave the red and green channels turned off. Alright, but if an aquarist has purchased a light that has red and green diodes, which work in conjunction with the other diodes to create certain light profiles, isn’t turning those diodes off giving them less than what they paid for? I haven’t seen a direct comparison of how a Red Sea MAX appears, outfitted with Hydra 26 lights, with the red and green colors turned off, compared to how it appears with them turned on. I tried this on my tank’s LEDs, and there is a noticeable change in lighting, and consequently coral color, when I turn off the red and green spectrum.

It’s interesting, if Red Sea feels so strongly about red and green LED lights stimulating algae growth, that they didn’t outfit their new MAX aquariums with a different light, perhaps one of Orphek’s fixtures that don’t rely on algae fueling colors. Or, why don’t they develop an LED lighting solution in-house, which creates beautiful, coral growing lights, without implementing a red and green spectrum. When consumer’s buy a MAX aquarium, outfitted with AI Hydra 26 lights, they are paying for the red and green diodes, and the lighting profiles they are used to create. This is very similar to buying a car, outfitted with fog-lights (which you have been charged for) and the salesman saying never to turn the fog lights on, as they may have undesirable results.

Red Sea is typically seen as a company that uses scientific precision to produce every product they sell. Their products are also known to carry a higher than average price. Throwing a light over a MAX, plug and play aquarium, charging for it, then telling customers to prohibit some of the light’s features, doesn’t feel like scientific precision at all.

It’s another illustration that shows why, it’s so vital that people do their homework, before dropping a lot of money on aquariums, or equipment.