“Red tide” and palytoxin in the home aquaria 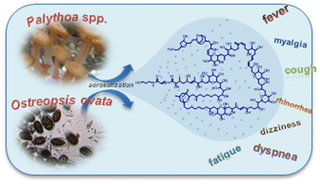 Advanced Aquarist has reported many times about the serious dangers palytoxins pose to reefkeepers.  It is, after all, one of the deadliest toxins known to man.  We can not stress enough how mindful all aquarists should be when working on their aquariums (both freshwater and saltwater).  Wear gloves.  Wear eye protection.  Obviously avoid ingesting tankwater.  Wash your hands after maintaining aquariums.  And do not boil aquarium water.

A new research has provided more scientific evidence that links palytoxins with reef aquariums.  Granted, the sample water they tested was from a reef tank whose owners fell ill after servicing the aquarium, so the study is not claiming that high levels of palytoxin is present in all saltwater aquariums.  The findings serve to validate the association between palytoxins in aquariums and its potential harmful health effects to aquarists.  Furthermore, the research also found the presence of Ostreopsis-related toxins in aquariums as well.  These are the same dinoflagellates responsible for “red tides,” which can also cause serious health problems when ingested or inhaled.

The research team developed a way to rapidly test for the presence of these toxins.  Whether this test can be commercialized for personal use is not known.  Regardless of whether we can test for these toxins or not, Advanced Aquarist recommends that everyone assumes they are present in all reef aquariums and act accordingly.

Many shore residents and beach-goers are already familiar with the health risks of “red tide,” algal blooms along coastlines that can trigger respiratory illness and other effects in people who inhale the toxins the algae release. Now in ACS’ journal Environmental Science & Technology, scientists report new evidence that similar effects can occur on a much smaller scale among home aquaria owners.

Raising brightly colored tropical fish and coral in a home aquarium is like displaying a living work of art. But unlike art, aquaria are dynamic mini-ecosystems, and some can even release harmful toxins very similar to those that algal blooms release. Some owners have reported fevers, difficulty breathing, flu-like symptoms and other health problems after using hot water to clean their aquaria. Hot water on rocks that harbor algae and other critters creates steam that can then be inhaled. But there is little scientific evidence to shore up the link between aquaria and negative health effects. Carmela Dell’Aversano and colleagues wanted to explore the potential connection.

The researchers developed a method to rapidly test aquaria for toxins. They used their procedure to sample the soft coral and synthetic seawater from a home system when a family of four in the Netherlands fell ill and ended up in the hospital 45 minutes after cleaning their aquarium. The samples had high levels of palytoxins, which are among the most potent non-protein marine toxins known and a possible cause of red-tide health effects. Although the results don’t prove cause and effect, the researchers say their findings provide further support for the association.

“Determination of Palytoxins in Soft Coral and Seawater from a Home Aquarium. Comparison between Palythoa– and Ostreopsis-Related Inhalatory Poisonings“
Environmental Science & Technology