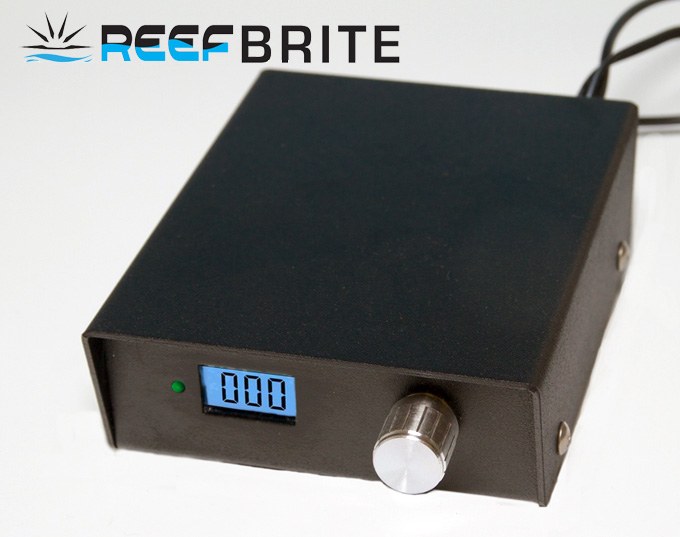 The first product is a microprocessor-controlled dimmable metal halide ballast.  The ballast offers the same self diagnostic features as their existing ballast line to insure maximum performance and lamp life.  Furthermore, the ballast comes with a remote control!  Reef Brite will offer standard dimmable metal halide ballasts in 150 to 400 watt versions.  Commercial versions rated up to 1000 watts will be available for larger systems and public aquariums.

Next is a twin lamp hybrid halide system capable of over 1000 watts of output.  The hood will accommodate up to 800 watts of metal halide lighting and available with an additional 220 supplemental LEDs.  The most remarkable feat about this system: It is a fan-less design!   Using proprietary passive cooling technology the system is designed to pull heat up and away from the aquarium instead of focusing heat downward like conventional halide systems. Reef Brite claims that the passive cooling is so effective at lifting heat away from the the tank that “with proper ventilation, the combo hybrid halide hood does not require the use of external chillers to maintain proper aquarium temperature.”  If this MH+LED hybrid fixture is half as good at removing heat as claimed, it will be an impressive feat.

Reef Brite’s third product is a digital interface module designed to control LED lighting such as the Reef Brite TECH or XHO LED system via an automated aquarium controller.  The unit will utilize A/D D/A conversion allowing it to be operated as a standalone unit. Details about its design and functionality are still sketchy at this time, but according to the R&D team at Reef Brite, the unit “was purposely designed to allow automatic/manual operation of DIY or competitive LED lighting system.”

These products are still under wraps until MACNA commences, so no additional photos are available at this time except these two of the digital controller we were able to coax out of them.

Backside of Reef Brites new LED controller box. What are at the end of those wires is anyone’s guess.