Reef fish are key to balanced nutrient levels for corals 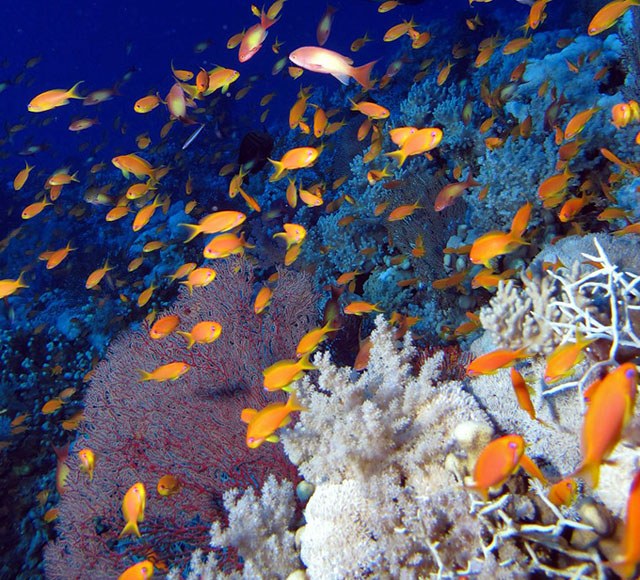 
﻿﻿From the University of Georgia:

Fish play a far more important role as contributors of nutrients to marine ecosystems than previously thought, according to researchers at the University of Georgia and Florida International University. In a pair of papers in the journal Ecology, they show that fish contribute more nutrients to their local ecosystems than any other source-enough to cause changes in the growth rates of the organisms at the base of the food web.

Jacob Allgeier, a doctoral student in the UGA Odum School of Ecology, and Craig Layman, associate professor at Florida International University, led the study, which took place in the waters of a large bay on Abaco Island, Bahamas.

Most tropical coastal ecosystems are nutrient limited, meaning that the system’s primary food sources such as algae and seagrass need to have enough nitrogen and phosphorus-in the right proportions-to grow and thrive.

“We’ve been thinking about the role of fish and the nutrients they’re excreting in these ecosystems for a while now,” Allgeier said. In marine food webs, fish are usually thought of as predators, he explained, consuming microorganisms, plants and smaller animals. But fish have another important, although often overlooked, role in the system. Through excretion, they recycle the nutrients they take in, providing the fertilizer sea grass and algae need to grow.

To determine the impact of nutrients from fish, the team needed to compare sites with fish populations of different sizes. Knowing that fish tend to congregate around reefs-the larger the reef, the more fish it attracts-they built a series of artificial reefs of two sizes, large and small, and selected a number of control sites with no reefs at all.

Over the course of two years they surveyed each site periodically to record the number, size and species of fish present. Allgeier created models to estimate the supply of nutrients from all species of fish at the various sites.

The researchers also measured the nutrient content and growth rate of seagrass. They weren’t surprised that seagrass at the large reefs grew faster and contained more nutrients than seagrass at the small reefs and control sites-but they were surprised at the magnitude of the difference and the extent to which it occurred.

“The rate of daily seagrass growth ranged from 37 square millimeters at large reefs to 10 square millimeters at control sites-nearly a four-fold difference,” Allgeier said. “Fish are putting an enormous amount of nutrients into this system-it appears to be even more than all other sources, including runoff from golf courses and all other human caused impacts, combined.”

The effect extended for roughly three meters around each large reef. The fish were contributing more nutrients than the seagrass could take in, allowing the excess nutrients to drift further away from their source, fertilizing seagrass and algae in ever-widening areas. The researchers anticipate this effect to extend further with increased time.

Allgeier described the large reefs as “biogeochemical hotspots”-areas with particularly high rates of chemicals cycling between organisms and the environment.

“Even if you have large numbers of fish, if they’re dominated by one species, they’re filling just one nutrient cycling niche in that ecosystem,” he said. “That’s not how these systems are used to being fed nutrients.”

The papers’ coauthors were Lauren Yeager and Elizabeth Stoner of FIU. Funding for both studies was provided by the National Science Foundation and the U.S. Environmental Protection Agency, with logistical support from Friends of the Environment, Abaco, Bahamas.