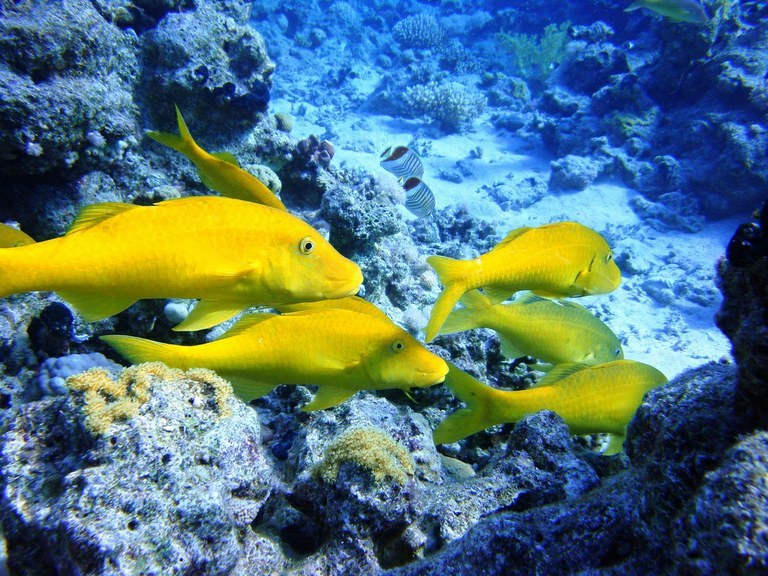 
The Indo-Pacific Gold Saddle Goatfish (Parupeneus cyclostomus) is one of few fish species shown to hunt in highly coordinated schools. Scientists from the University of Neuchatel, Switzerland set out to uncover the social structure of these goatfish and ended up discovering their remarkable group-hunting behavior.  Their work is published in the behavioral biology journal Ethology.

The scientist discovered that members of a school will adopt specific roles in their cooperative hunts; A single goatfish will assume the role as the “chaser” while the other members of the school assume the roles of “blockers,” helping direct prey and block escape routes to ensure the success of the “chaser.”  Unlike some group-hunting animals where individuals assumes the same role each hunt, goatfish take turns assuming the “chaser” role so everyone has a chance to catch a meal.

For anyone who’s watched nature programs, this behavior should conjure up images of lions hunting wildebeests, zebras, and gazelles on the African savannah.  Wolves, Orcas, Dolphins, Chimps, some birds, and of course humans are all known to hunt cooperatively.  Until recently, science thought such advanced coordinated behaviors were reserved for higher-ordered animals such as mammals and birds.  More and more, science is showing us reef fish are no dummies either.  From tool usage to “pack” hunting, I wonder what we will discover next.