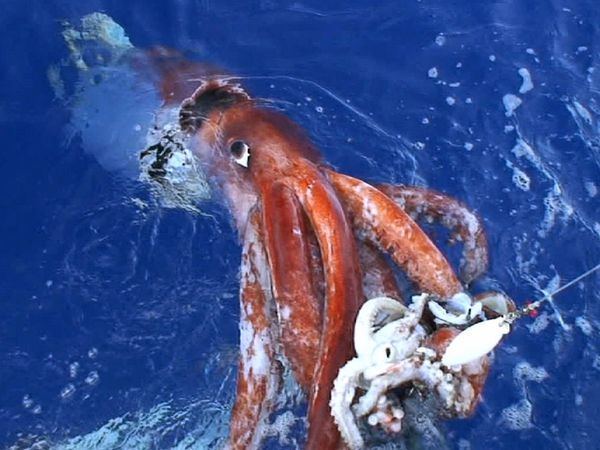 In this photo released by Tsunemi Kubodera, a researcher with Japan’s National Science Museum, a giant squid attacking a bait squid is pulled up by his research team off the Ogasawara Islands, south of Tokyo, on December 4, 2006.

The giant squid is an incredible creature. The largest one ever found measured 43 feet in length and weighed nearly a ton!  Scientists don’t know very much about these animals, because they live at great depths below the ocean’s surface.  Most of what we do know comes from studying carcasses that wash up on shore – and they have been found all over the world. Squid are related to snails, clams, and slugs; they are all mollusks, which are defined by their soft bodies. And squids belong to a group of mollusks called cephalopods, which have been around for 500 million years. I think the most interesting thing about squids is, that instead of having a proper tongue, they have an organ called a radula: 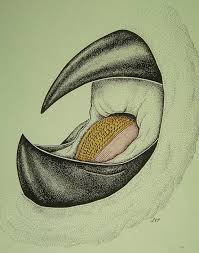 The radula rests inside their beaks and is covered with seven rows of denticles – which are like tiny sharp teeth that point backwards towards the squid’s esophagus. The squid uses its radula to break up the deep-sea fishes and other squids that it likes to eat into tiny pieces. The pieces need to be very small, because the squid’s brain is shaped like a donut and its esophagus runs through the “donut hole” in the middle!

Would you like to have your own squid? You can make one with supplies already in your house. You just need two pieces of construction paper, a cardboard egg carton, and something for the tentacles – tissue paper, streamers, or even some plastic bags.  Simply cut two egg cups out of the carton, and cut the two pieces of paper into the shape of the squid’s mantle (body).  Then, decorate the mantle however you’d like, affix the streamers to the backside, glue or staple the other paper on to the back, and glue on the eyes.  So fun! 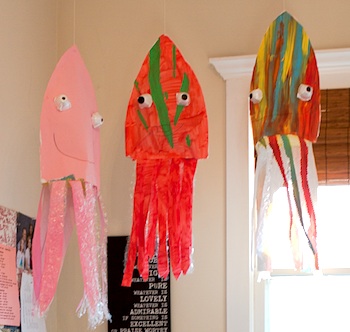