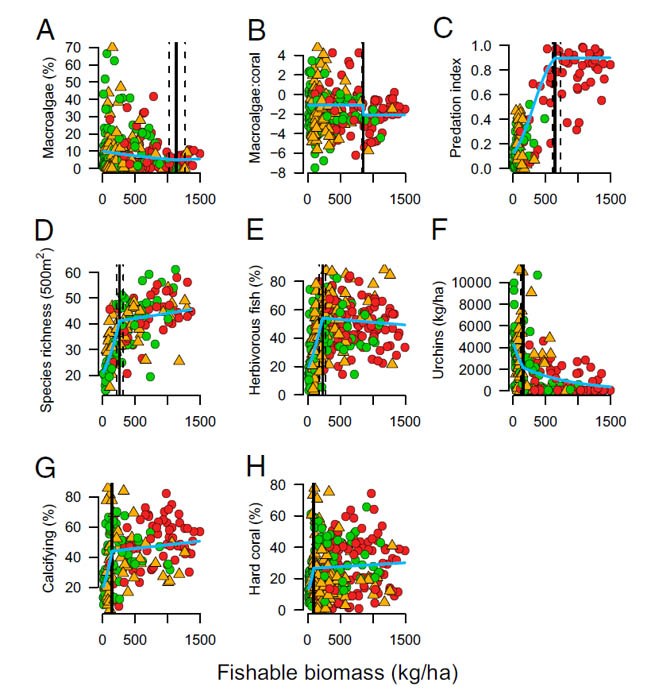 The “tipping points” for each metrics are clearly visible in the trendlines.

The ARC Centre of Excellence for Coral Reef Studies at James Cook University compiled surveys of over 300 reef sites and determined several significant reference  points for gauging reef health in relation to fish biomass.  They found that every hectare of well-protected reef typically had 1000 to 1500 kilograms of fish biomass. As the numbers are reduced, the researchers discovered some surprisingly demarcated “tipping points” (as seen in the graphs above).  Below 1130kg/ha, the first signs of ecosystem change is evidenced by increasing seaweed growth.  At 850kg/ha, the algae-to-coral ratio sharply increases to favor algae. At 640kg/ha, researchers observed a very rapid decline in the predation of sea urchins.  The next reference/tipping point is crossed at 300kg/ha when biodiversity drops dramatically (with a severe decline in herbivorous fish coinciding with a rapid increase in sea urchin populations), raising alarm for ecosystem failure. Below 150kg of fish per hectare, calcification rates and hard corals breaches the final threshold where coral growth and cover rapidly descend to zero.

Not surprisingly, the report found more stringent fishing regulations (such as total or partial fishing closures and gear restrictions) resulted in healthier fish populations.  Protected reefs with no-fishing zones (such as Cabo Pulmo National Park, deemed the most robust marine reserve in the world) had the greatest biomass and biodiversity.

The study also discovered something interesting about using coral cover as a metric for determining reef health:

Ironically, coral cover is one of the most commonly measured metrics for coral reef condition but was the least sensitive metric to losses in fishable biomass. There is broad correspondence between this observed pattern and the documented trajectory of Caribbean reefs, where severely overfished reefs were dominated by very high cover of live corals until their sudden shift to dominance by macroalgae following a die-off of the most abundant grazing sea urchin (1). Together, these studies indicate that reefs may appear healthy long after fishable biomass has been reduced to the point that ecosystem function is jeopardized. This emphasizes the need for reference points that ensure management actions are implemented before it is too late.

By monitoring fish biomass and correlating the data with the discovered “tipping points,” the report hopes to help fisheries recognize early warning signs and establish better fishery management guidelines for coral reefs, including collection for the aquarium trade.

The report Critical thresholds and tangible targets for ecosystem-based management of coral reef fisheries is published in the latest issue of Proceedings of the National Academy of Sciences of the USA (PNAS).

An international team of scientists has achieved a major breakthrough in fishing sustainability on coral reefs which could play a vital role in preventing their collapse.

“Fishermen and scientists have long wondered how many fish can be taken off a reef before it collapses, says Dr Nick Graham of the ARC Centre of Excellence (ARC CoE) for Coral Reef Studies and James Cook University.

“The consequences of overfishing can be severe to the ecosystem and may take decades to recover, but hundreds of millions of people depend on reefs for food and livelihoods, so banning fishing altogether isn’t a reality in many nations.”

In a report in today’s issue of the Proceedings of the National Academy of Sciences of the USA (PNAS) the researchers demonstrate how overfishing can generate a predictable sequence of events that lead to the collapse of reef ecosystems.

Their research offers a vital new tool for managing corals reefs and tropical fisheries worldwide, providing clear targets for sustainability that can help reef fisheries support the very resource they depend on.

“Our work shows that as fish biomass – the number and weight of fish living on a reef – declines due to fishing pressure, you cross a succession of thresholds, or tipping points, from which it is increasingly hard to get back,” Dr Graham explains..

“The loss of hard corals is actually the last stage in the collapse of the reef system. Though many people take it as a major warning sign, in fact, by the time you see the loss of live coral cover, it may be already too late to save the reef.”

The study shows that in well-protected areas, there are typically 1000-1500 kilos of reef fish of various species per hectare of coral reef.

As the volume is fished down below 1000 kilos, the early warning signs – like increased seaweed growth and urchin activity, begin to show up.

The researchers found that between 300-600 kilos/ha there appeared to be a window of what is known as maximum sustainable yield, but when the fish stock drops below 300 kilos/ha the reef is in real trouble, they say.

Dr Aaron MacNeil from the Australian Institute of Marine Science adds: “This information is critical to policy makers and reef managers: if fish stocks can be maintained at a certain level, the chances of retaining a sustainable fishery and a healthy reef system are greatly improved.

“It’s a way of understanding the health of the whole system, not just parts of it,” he says. “It offers managers a tangible target for protecting both the fishery and the reef, and it supports the need for long-term monitoring of fish in places such as the Great Barrier Reef.”

“Of course, having a target is one thing, but achieving it is, well, another kettle of fish” adds Dr Joshua Cinner, also from the ARC CoE. “So we also assessed how well different reef management schemes did at maintaining reefs within or above this sustainability window.

Reef fisheries with no regulations tended to perform poorly, with some completely collapsed. No-take marine reserves, where fishing was prohibited were the best performers and tended to maintain key ecosystem processes, such as predation.

“But people depend on reefs for their livelihoods, so we can’t prohibit fishing everywhere.” notes Dr. Cinner. “A key finding from our study was that even easily enforceable regulations that restrict gear or the types of species that can be caught helped maintain biomass. These regulations are often more palatable to fishermen than no-take closures and consequently receive higher levels of support and compliance.”

The researchers point out their work was carried out on Indian Ocean coral reefs, and needs to be confirmed in the Pacific and Great Barrier Reef regions – however they are confident a similar relationship exists between the volume of fish and overall reef health. Similar relationships may also apply in other ecosystems.

Their paper Critical thresholds and tangible targets for ecosystem-based management of coral reef fisheries by Tim R. McClanahan, Nicholas A. J. Graham, M. Aaron MacNeil, Nyawira A. Muthiga, Joshua E. Cinner, J. Henrich Bruggemann and Shaun K. Wilson is published in this week’s online edition of the Proceedings of the National Academy of Sciences of the USA.