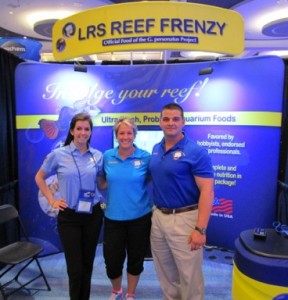 Every year, a flurry of new products and innovations hit the reefing market that grasp for our attention. They come and go, become mainstream and flit from our minds nearly as quickly as they came. Then, every once in a while, a product comes along that’s a complete game-changer. And this, ladies and gents, was one hell of a game changer.

I’m sure you’re all familiar with a little company known as Larry’s Reef Services®, Reef Frenzy® and the distinctive, bright yellow and blue packaging by now as they’ve come up in several pretty groundbreaking stories just this year alone, but here’s a quick background for ya. LRS® shot to life when Larry DuPont found he was unsatisfied with the available options and began searching for his own fresh seafood, creating small batch foods for himself, local reefers and a handful of stores. The feedback was remarkable and Reef Frenzy® began to spread with, well, a frenzy! He analyzed and perfected his blends, with input from hobby experts and registered Reef Frenzy® as a legally licensed pet food company. By February 2013 the demand was so great, Larry retired from the police force and began producing his foods full time. 2014 marked a milestone for LRS® when they began exporting their food to exotic fish collectors in Hong Kong, Japan, Thailand and the UK.

Despite the complete explosion of LRS® and Reef Frenzy®, Larry and his business partner, wife, Veronica DuPont, stay true to their grassroots here, offering unmatchable customer service and a pristine, premium product. A feat that means folks over at LRS® are working in hyperdrive to maintain a level of excellence and dedication that exceeds anything out there on the market today. They took the bar and raised it to a level that would make even the most seasoned athlete sweat. It’s for this reason that Larry’s Reef Services® makes it to the top of our list of Reefs.com Top Picks of 2014.

I sat down with Larry to talk about this past year, what he hopes for LRS® in the future, and the future of the industry. He was kind enough to allow me a peak into his thoughts.

What stood out to you the most this year, the three best moments for LRS®

1. Clearly being first time exhibitors at MACNA in Denver was a proud moment for us. Meeting so many of our fans, combined with the revelation that LRS® was involved with the G. personatus breeding project really put the weekend at the top of our list of best moments. The G. personatus project places our family business in the international spotlight and bolstered our reputation for quality.

2. The best moments of 2014 for me centered around the knowledgable and fun people I was able to meet in the hobby. Being invited to see and feed LRS® to some of the most amazing aquariums in the USA as owned by Andrew Sandler, Bill Wann and Bradley Syphus was awesome. On other trips I was able to hang out with Aquarist of the Year, Richard Ross, Joe Yaiullo, Koji Wada, Rufus Kimura, Sanjay Joshi, Lemon Tea Yi Kai, Todd Gardner, Laura Birenbaum and too many other industry figures to list. Being able to enjoy what you do for a living, while making new friends along the way is awesome.

3. Actually getting to swim in a 16,000 gallon aquarium in Sandy, Utah at the Scheels sporting goods store and hand feed my food to swarms of fish while underwater and filming it with the GoPro. I owe a big thanks to Jerry Ohrn who owns “Reef On” and services the system for inviting me to do that.

Honestly, these would be incredible moments for anyone, a dream for any reef enthusiast. How could we forget the storm that struck during the release of the G. personatus project? The holy grail, uber rare fish collected by Rufus Kimura, captive bred by Karen Brittain, and fed an exclusive diet of LRS Reef Frenzy® when she found they were barely eating with incredible success. We also had the pleasure of joining Larry for that visit of Andrew Sandler’s tank where we laid eyes upon some of the most sought after, creme de la creme fish in the hobby.

So what’s next for LRS® – a New Year’s Resolution from Mr. DuPont?

To streamline production, shipping and logistics at LRS® to accommodate the increasing demand for our products to build in more “off” time to spend with my family. Owning and operating a growing business has been a blessing and I would much rather be too busy than too slow, but it’s very demanding. There never seem to be enough hours in the day! In the New Year, additional staff will enable me to have more time to focus on continued research on product development and expanding in new markets. We plan to add several products to our lineup in 2015, but I don’t want to let the cat out of the bag yet.

What was the most difficult part of 2014? To an outsider, you’re on a serious roll, knocking nothing but home runs out of the park, but with such rapid success there must be some negatives.

The hardest part of growth has been adjusting to the flood of inquiries and managing my inbox. With smartphones, email, social media and now international distributors in different time zones the “business” is a 24 hour endeavor. The Internet has spread the LRS® name far and wide in a matter a months, however the Internet has no “off” button. If you are not careful it is very easy to let the business own YOU instead of the other way around.

Certainly sounds exhausting, your hard work is clearly evident in the quality of your products and level of customer service. Lastly, what’s your hope for the future of LRS® and the industry itself?

In just two years LRS® has managed to turn the fish food industry on its head. By processing premium, human grade seafood ingredients into fish foods, no longer are cheaply sourced, “bait quality” ingredients from Asia the norm for aquarium fish food. LRS® supports captive breeding efforts and we hope to fill a niche in aquaculture by providing a diverse and complete diet which has already been proven to increase spawns and larval hatch rates. Probiotic supplementation has numerous benefits grounded in aquaculture and now those results are being brought to the ornamental trade via our foods. On the flip side, we are rapidly gaining a reputation on the national web forums as the “go-to” food for finicky feeders such as copper bands, mandarins, rare butterfly fishes, etc. We have all been there… you buy a new fish, it gets stressed, possibly bullied, doesn’t eat and then it often sets off a downward spiral in your aquarium. Through freshness, diversity and now appetite stimulants such as black worms and fish eggs, we hope to increase the success rate of ALL hobbyists with keeping their fish healthy. Someone once posted the average time in the hobby of a reef hobbyist is 18 months and they frequently quit the hobby due to a nasty bout with a parasite or a system crash. It will not replace proper quarantine protocols but proper diet can boost immunity and maintain the health of the fish so that hopefully the average hobbyist will have more success and not get frustrated. The longer a hobbyist is successful, the more upgrades, equipment, dry good and live stock he or she will purchase which benefits many vendors, local fish stores and the industry as a whole.

Truly wonderful words right there, and we firmly believe if anyone can help accomplish these goals, it’s the one-of-a-kind Larry DuPont. Huge thanks to Larry for allowing me the pick his brain for a bit, it’s great to get some insight into the man behind the Frenzy®. Here’s to looking forward to the next way he’ll blow our minds and continue to make even the pickiest of fish go crazy! 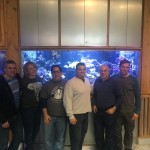 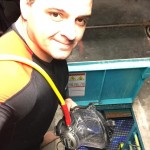 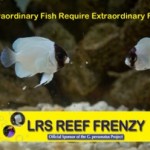 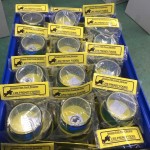 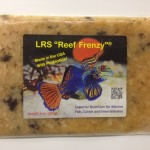 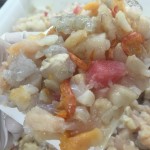 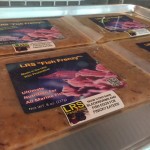