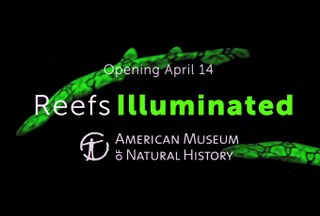 
Tropical bioluminescence and biofluorescence create some of nature’s most beautiful light shows.  Filming these natural phenomenons is increasingly popular because they straddle the line between art and science.  Public media featuring reef bioluminescence and biofluorensce have already found their way into such places like the Miami International Airport to the Sundance Film Festival thanks to Coral Morphologic.

A new film by another art-science-exploration team, Luminescent Labs, aims to expose a wider audience to the spectacle of bioluminescence and biofluorescence. According to Luminescent Labs:

Reefs Illuminated takes viewers on an underwater journey to the remote and pristine South Pacific coral reefs of the Solomon Islands, a biodiversity hotspot, where they accompany American Museum of Natural History scientists on nighttime biofluorescent scuba dives.

The footage includes some of the first recordings of biofluorescent species of both cartilaginous (sharks and rays) and bony fishes (eels, anglerfishes, and seahorses) along with biofluorescent corals, anemones, crinoids and numerous other glowing invertebrates.

Reefs Illuminated is an art/science fusion directed by Brennan Vance with an original soundtrack by Freezepop’s Sean Drinkwater. Cinematography by Ken Corben, David Gruber, Vincent Pieribone, John Sparks and Brennan Vance shot during a National Geographic/Waitt expedition as well as nighttime shoots at the Mystic Aquarium.

Here is the trailer for Reefs Illuminated. (we dig the soundtrack!)

We encourage you to visit Luminescent Lab’s website to learn more about bioluminescence and biofluorescence.  They’re website is top-notch and features lots of outstanding information, photography, and a very cool interactive exploration exhibit. And if you’re in the New York area, we encourage you to visit the American Museum of Natural History to watch the full 14 minute film in their GeoDome theater.  If the trailer is an indication, you’re in for a remarkable experience.