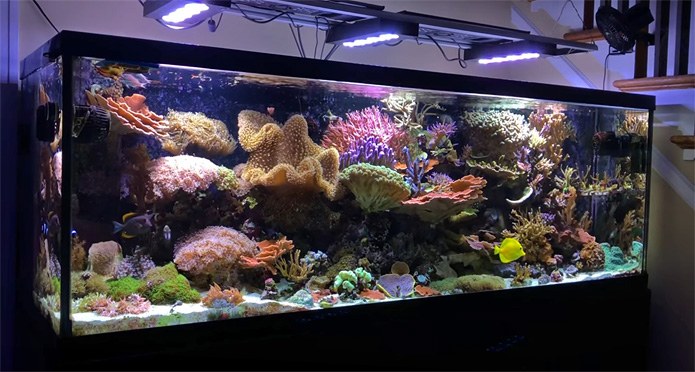 
It wasn’t very long ago when reefkeepers only kept soft and LPS corals.  With advancements in technology, science, and good ol’ experience, reefkeepers gradually learned to keep SPS corals in captivity.  Throughout the 1990s, mixed reefs combining soft, LPS, and SPS corals were the prevailing reef tanks of the decade.  Around the turn of the millenium until today, stony tanks began to dominate the reefkeeping scene, with many reef tanks exclusively SPS.

It’s really great to aquarists such as ReefSpy who embrace true mixed reefs.  While stony and SPS-exclusive aquariums are undoubtly colorful, there’s something to be said about the combination of color and movement that only a mix of soft and hard corals can impart.

One of the allures of reef tanks is to replicate a harmonious captive ecosystem in our homes.  ReefSpy’s 180 gallon reminds us of all the wonderful inter-species interactions – like a hawkfish nesting atop a large Sarcophyton leather coral- that make coral reefs so fascinating.