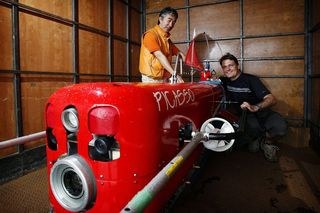 
The team comprising of Japanese and Australian engineers and scientists will explore the waters off Osprey Reef.  The submarine will explore the shallow waters and sea bed (600+ meters deep) and everything in between.

The expedition will be filmed by Digital Dimensions as part of a documentary for the BBC, co-produced by the Discovery Channel and Channel Nine.