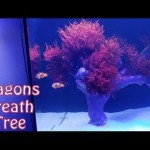 After two and half years of waiting, the renovated Toledo Aquarium will be opening on March 27, 2015.  Nearly 26 million dollars was spent in the process. When the aquarium was closed for renovations, it held a respectable 46,000 gallons. Today it holds a whopping 178,000 gallons and includes interactive exhibits for visitors, like the Touch Tank and Ocean Lab. The largest exhibit, the reef tank, has gone from 7600 gallons to 90,000 gallons. This amazing transformation inside the aquarium has not effected the exterior of this historic 1939 Works Progress Administration (WPA) building. The outside of the building remains largely unchanged, with only the entrance changing location, with the renovation making very good use of what was previously unused space. Highlights of new exhibits include a South American Amazon Ecosystem, Gulf of Mexico Exhibit, Flooded Forests, Kelp Forests, Electric Eels and Deep Sea Creatures. Excited to add this to my list of must see Aquariums for 2015.