Rescue project comes to the aid of the endangered Banggai Cardinalfish 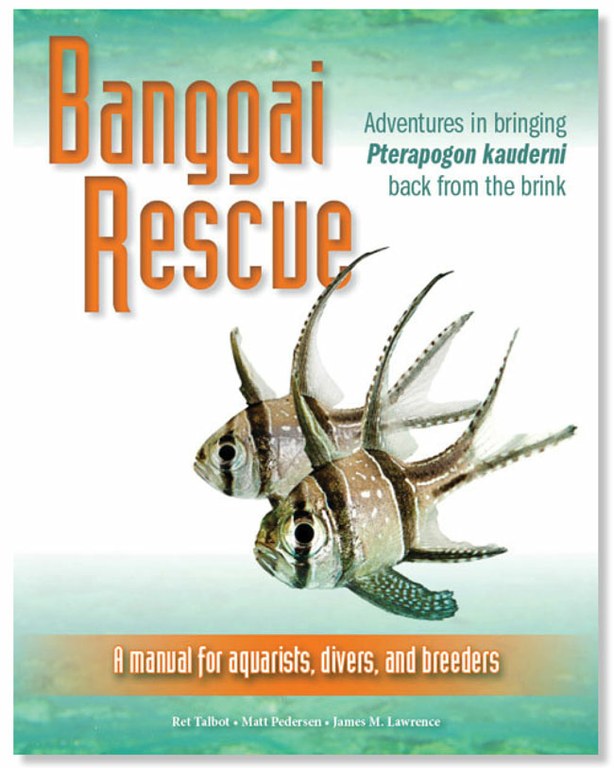 Banggai Rescue: Adventures in bringing Pterapogon kauderni back from the brink. A manual for aquarists, divers, and breeders.


“It’s time to save this fish,” says James Lawrence, as he and an interdisciplinary team of aquarists and marine scientists today announce the launch of a major initiative to prevent the Banggai Cardinalfish, Pterapogon kauderni, from being wiped out in parts of its native range.

Uncommonly beautiful and known for its unusual mouthbrooding reproductive habits, the species was listed as Endangered in 2007 by the International Union of Concerned Scientists’ (IUCN). Uncontrolled harvest for the aquarium trade has been cited as the major threatening factor for a fish with a very limited natural range.

Project BANGGAI RESCUE will send a team on an expedition this May to the remote Banggai Islands in Sulawesi, Indonesia, with several simultaneous missions: assessing the situation; tracking the source of a mysterious disease that kills many Banggai Cardinals collected for the aquarium trade; exploring the possibility of establishing mariculture operations run by local Indonesian families; and collecting healthy broodstock for captive aquaculture research in the United States.

“We need approximately $25,000 for the first stage of this project,” says Lawrence, editor and publisher of CORAL Magazine and head of Reef to Rainforest Media, based in Shelburne, Vermont. “Today we are going live with a Kickstarter.com campaign to raise funds for the expedition, captive breeding research, and seed money to produce a book covering all aspects of the project.” Coauthors announced today include writer Ret Talbot, who will be embedded with the Expedition, and Matt Pedersen, who is writing new protocols for small-scale breeding of the species. Lawrence says that the science team will be named in the coming weeks.

About Kickstarter: Kickstarter is a website that allows individuals or groups to collect “crowd-source” funding for their projects. Anyone can submit a project for funding and projects can range from the arts, technology, dance, design, music, food, games, etc. It operates under an all-or-nothing funding methodology where the project must be fully funded or no funds will be given to the project. Thus if this project is to be successful, it must be fully funded to the $25,000 goal by April 8 (26 days from now) or it will not be funded.

Entitled “BANGGAI RESCUE, Adventures in bringing Pterapogon kauderni back from the brink”, the book is scheduled for publication in time for the annual Marine aquarium Conference of North america in Dallas/Fort Worth at the end of September, 2012. Sales of the book will help fund ongoing research and sustainability initiatives.

If you would like to back this project, head over to the Kickstarter Project page to make your financial pledge to help the project. There are a variety of funding options available for all levels of support. You can pledge as little as $1 or over $10,000.  As you increase your funding contribution for the project, you are given additional perks:

Check back periodically on the Kickstarter page for regular updates on the project. In addition, a website has been set up further documenting the project; It can be found at http://www.banggai-rescue.com.

Advanced Aquarist encourages you to fund this project.