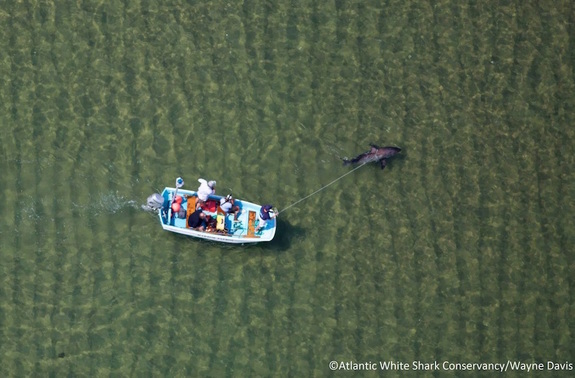 In July, a young Great White Shark became stranded on a Cape Cod beach. People on the beach saw the shark in distress, and came to its rescue by throwing water on its gills to help it breath. State Officials were immediately called and were able to drag the shark into deeper waters using a long rope that was attached to a motor boat. The shark was kept close to the boat and water was poured over its gills until it eventually was able to swim away. Researchers were concerned based on the injuries the shark sustained while it was beached, including overheating and oxygen depletion. Inexperienced juvenile sharks are more likely to become beached, as they can get confused when they are not in their deep sea environment, when they encounter sand and rocky shore lines.While the shark was being revived near the boat, experts tagged the shark on it’s dorsal fin. Although scientists warned that the tracking system was not fail proof, as the batteries in the devices don’t always work and the devices are also likely to fall off the shark. Therefore, lack of a signal could not be determined to mean the shark did not survive. However, acoustic receivers located about 3 miles south of where the shark was released, picked up the sharks signal within 2 weeks from when the shark was helped. Gregory Skomal, a fisheries biologist with the Massachusetts Division of Marine Fisheries, who helped save the shark, said: “It’s very encouraging that the shark was alive,” he told Live Science. “If I had to guess, if it survived for a couple days, it’s going to survive [in the long term].”