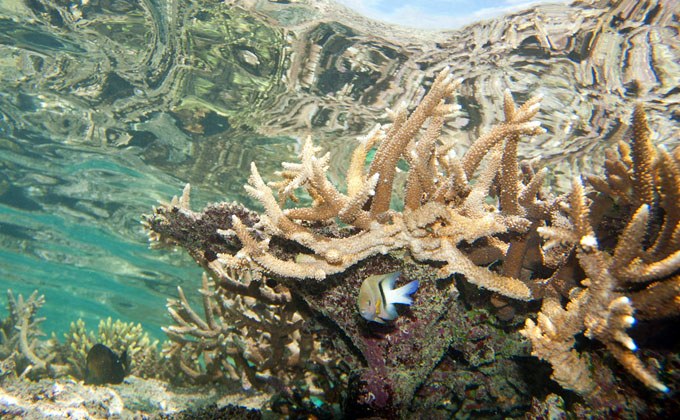 Big waves are energetically costly for fish, and there are more big waves than ever. The good news is that fish might be able to adapt.

“There has been a lot of recent work in oceanography documenting the fact that waves are becoming more frequent and more intense due to climate change,” says Mr Dominique Roche, PhD candidate from the Research School of Biology. “The habitats that fish live in are changing.”

“This is not a localised problem, but something that is documented globally,” adds Ms Sandra Binning, also a PhD candidate in the Research School of Biology.

Mr Roche and Ms Binning are co-authors on a study documenting the energy it takes for fish to swim through large, intense waves. Specifically, they focused on fish that swim with their arm, or pectoral fins, which are very common on both rocky and coral reefs.

“By controlling water flow in an experimental chamber with the help of a computer, we were able to replicate oscillations in the water flow like in a wave pool,” explains Mr Roche.

Mr Roche and Ms Binning found that it’s a lot more energetically demanding for fish to deal with large fluctuations in water speed and wave height.

“It’s harder to constantly switch speeds than it is to remain at a constant speed, like a runner changing between running and a walking during interval training versus a steady jog. Well, it’s the same for swimming fish,” says Mr Roche.

“Things could get tough for fish in windy, exposed habitats if waves get stronger with changing climate. But there may be a silver lining,” says Ms Binning.

“In the swim chamber, when the water flow increased, fish had to beat their fins faster to keep up. But when the water flow slowed down, some fish took advantage and rode the wave. Essentially, rather than beating their fins frantically, these fish used the momentum that they had gained while speeding up to glide and save energy.

“This means that some individuals are better at dealing with waves than others, and that there is hope for populations to adapt their swimming behavior to potentially changing conditions in the future,” concludes Mr Roche.

Their research was recently published in the Journal of Experimental Biology.