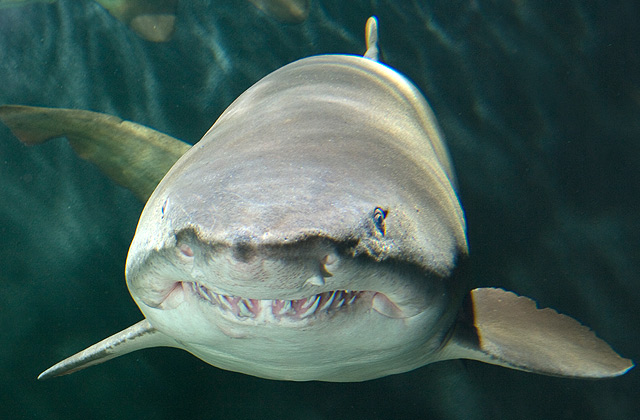 Sand Tiger Sharks look fierce, they are the quintessential, stereotypical ‘man-eater shark’ with their jagged, razor sharp teeth protruding out of their mouth. Basically, they are the big-ticket item many aquarium visitors expect to see in exhibits. As such, they are a popular exhibit animal in large public aquarium tanks; there are approximately 200 sand tiger sharks on exhibit in public aquariums and zoos in America. Although they look scary, they are relatively docile sharks that are easy to care for in captivity. However, Sand sharks in captivity do not breed easily, since the environment in captivity does not mimic the seasons and changes in the wild. Sand shark population in the wild is at low levels because of fishing nets and shark fin poaching, and the slow maturing reproduction in the species. Researchers are trying to figure out how they can aid reproduction and get the population of sand sharks up. The research will focus on trying to determine when male and female sharks are most fertile and possibilities for freezing sperm and inseminating female sharks. Zoos and public aquariums have done amazing captive breeding work in years past, I am optimistic that the trend will continue and that the captive birth of a Sand tiger shark will soon be on its way.