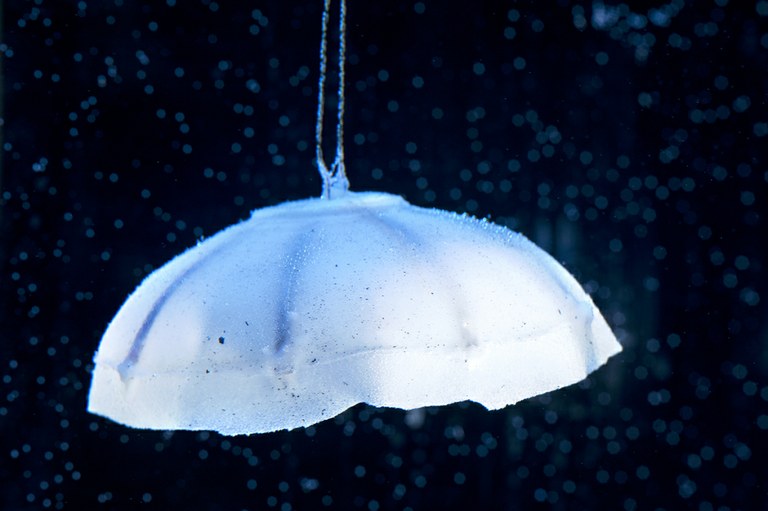 This bio-inspired robotic jellyfish, roughly the size of a man’s hand, was designed by Shashank Priya, professor of mechanical engineering, and a research team at the Center for Energy Harvesting Materials and Systems, part of the Virginia Tech Institute


Published in a recent issue of the Proceedings of National Academy of the Sciences (http://www.pnas.org) , the study highlights jellyfish as one of the most energetically efficient natural propulsors on the planet. Researchers found that rather than moving continuously through water while swimming, jellyfish use a critical pause between the contraction and expansion of their bell-shaped body to create a vortex that pushes them forward. In essence, the creature displaces the water behind them, creating a “hole” that when re-filled propels them forward.

This feat of motion allows the creature to travel 30 percent farther each stroke cycle, thereby reducing metabolic energy demand by swimming muscles, said Shashank Priya (https://www.me.vt.edu/_bios/_primary/priya_bio.html), professor of mechanical engineering (http://www.me.vt.edu) and Turner Fellow, who led Virginia Tech efforts on the project. “The fluid is helping the jellyfish to move and conserve the energy,” he said. “The fluid is actually pushing them, and when that energy dissipates, they contract again.”

Researchers also found that the jellyfish in the study displayed a lower cost of transport – the amount of food and oxygen taken in by the body, versus energy spent in movement– 48 percent lower than other animals in similar studies. This quick action with minimal spent also helps jellyfish in hunting of food.

The study was led by the Marine Biological Laboratory, based in Woods Hole, Mass., along with Virginia Tech; Providence College and Roger Williams University, both of Rhode Island; and California Institute of Technology. Priya’s team led computational modeling efforts, taking video of the jellyfish movements filmed in laboratory water tanks, and translating that information to computer animation.

The computer modeled jellyfish – unlike the real gelatinous zooplankton filmed in lab settings — allows researchers to control movements of the creature however fast they wish, and in any desired direction. The virtual effort is similar to performance capture filming of actors for later computer-animated visual effects for such films as “The Lord of the Rings.”

Computer modeling was spearheaded by Colin Stewart of Charlottesville, Va., a doctoral student in Virginia Tech’s Department of Mechanical Engineering. Stewart said it was “remarkably difficult” to capture the flexibility and soft edges of the jellyfish into a full, controllable computational framework versus a more rigid body such as a shark or a human swimmer whose movements can more easily be modeled because of their joints.

Jellyfish have long been known as having a simple muscular makeup and being inefficient swimmers that rely on the current flow of water to navigate. Yet, the ability to conserve energy even while moving may help explain why jellyfish are bloom and inundate ecosystems, or even man-made systems, such as ports and dockyards.

The study results will allow the research team – including Danesh Tafti (http://www.me.vt.edu/_bios/_primary/tafti_bio.html), the William S. Cross Professor of Mechanical Engineering at Virginia Tech – to better design life-like autonomous robotic jellyfish (http://www.vtnews.vt.edu/articles/2012/05/052912-engineering-robojelly.html)that are part of a U.S. Office of Naval Research-funded project investigating the science of bio-inspired vehicles with a focus on understanding the natural propulsion mechanisms in sea life.

Priya, Stewart, Tafti, and their team hope to replicate the unique forward propulsion movement into the robotic jellyfish, thereby designing a vehicle that uses the least amount of battery power to go a greater distance. For now the research will translate that information only to the smaller robotic jellyfish that Priya’s team has built. These robotic vehicles are roughly smaller than a man’s outstretched hand, but vary in shape from a mushroom bell to a compact lamp and lamp shade.

“Jellyfish are attractive candidates to mimic because of their ability to consume little energy owing to a lower metabolic rate than other marine species, survivability in varying water conditions, and possession of adequate shape for carrying a payload,” Priya said in 2012 when several of the smaller robotic jellyfish were unveiled. “They inhabit every major oceanic area of the world and are capable of withstanding a wide range of temperatures and in fresh and salt waters. Most species are found in shallow coastal waters, but some have been found in depths 7,000 meters below sea level.”

Virginia Tech also has unveiled a life-like, prototype autonomous robotic jellyfish nicknamed Cyro (http://www.vtnews.vt.edu/articles/2013/04/040313-engineering-robotjellyfishcyro.html) that is 5 foot 7 inches in length and weighs170 pounds, as part of the larger Office of Naval Research project. It is not known yet, however, if the same energy efficiency in swimming exists in the larger jellyfish as it does in smaller species. The problem lies in the size of the jellyfish itself. “You can’t bring it into the lab in a water tank,” said Priya, adding that getting high-speed film of the larger jellyfish in a swimming pool or the ocean environment also is difficult.

The team likely may take the computer modeling from the smaller jellyfish studies and extrapolate the findings to the larger model, said Tafti.

Watch a Virginia Tech News video of the robotic jellyfish, with an explainer by Shashank Priya, here: (http://www.unirel.vt.edu/audio_video/2012/04/042612-robojelly.html).