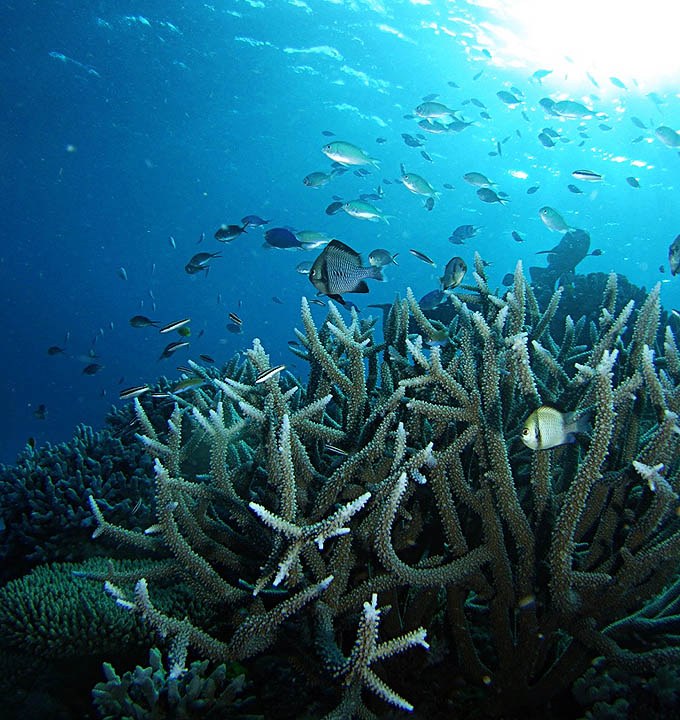 Sunset for coral reefs? Not so fast, says a recent GBR study. Photo of the GBR by Geir Friestad


Scientists surveyed 47 reefs stretching over 1300 km (800 miles) of the GBR,  Images from large-scale, permanent monitoring programs were analyzed to determine the percent cover of live hard coral from 1995 to 2009 (using a point-sampling technique in a quincunx pattern).

A Crown of Thorns Starfish. Photo by Joi Ito

They found that “coral cover increased in six sub-regions and decreased in seven sub-regions,” with some changes “being very dynamic and others changing little.”  Acroporids were largely responsible for these changes.  In fact, the study states “Crown-of-thorns starfish (Acanthaster planci) outbreaks and storm damage were responsible for more coral loss during this period than either bleaching or disease despite two mass bleaching events and an increase in the incidence of coral disease.”

When looking at the data as a whole, they discovered “overall regional coral cover was stable (averaging 29% and ranging from 23% to 33% across years) with no net decline between 1995 and 2009.“

Contrary to scientific agreement about the degradation of coral reefs, this study concludes that hard coral cover in the GBR has remained relatively stable despite ocean warming and acidification.  While mass bleaching events is well-documented fact (1998, 2002, 2006), the study suggests corals’ ability to adapt and recover is greater than we might give them credit for.

The danger with these types of studies is that some people and industries may use the conclusions as license to continue un-eco-friendly practices.  It is important to note the study does predict how corals will respond under increased pressure from climate change, just how they have responded in the past 15 years.  Most studies and forecast models show that if climate change continues on its current course, coral reefs are in serious jeopardy.  Corals (and life in general) are resilient, but there is a threshold for their resiliency.  Hopefully we never find out what this threshold is in nature.