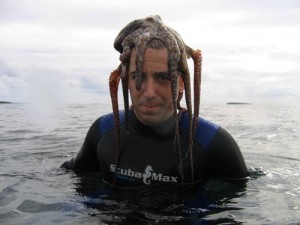 Marine biologist, Richard Ross, was the first speaker to be announced for the 2012 Marine Breeder’s Workshop that will be held on July 28th at the Cranbrook Institute of Science in Bloomfield Hills, MI.

Richard Ross currently works as an Aquatic Biologist at the Steinhart Aquarium in the California Academy of Sciences, maintaining many exhibits including the 212,000 gallon Philippine Coral Reef. He has kept saltwater animals for over 25 years, and has worked in aquarium maintenance, retail, wholesale and has consulted for a coral farm/fish collecting station in the South Pacific. Richard enjoys all aspects of the aquarium hobby and is a regular author for trade publications, a frequent speaker at aquarium conferences and was a founder of one of the largest and most progressive reef clubs in Northern California, Bay Area Reefers.

His talk will cover the nuts and bolts of established and cutting edge Cephalopod breeding and rearing techniques, as well as discuss the successful spawning and larval rearing attempts of other marine animals at the Steinhart Aquarium.