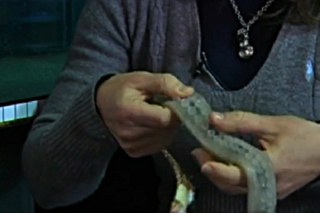 The updated tentacle that will be used on the robot.


Back in March 2011 we covered how a series of research teams were attempting to create a robotic version of an octopuses tentacle that could be used for underwater salvage, maintenance, and other activities. Back then it was more of a concept. Now the research has progressed enough that the teams believe that they will have a working robotic animal based on this concept completed by year end. This project is estimated to cost 13 million dollars.

The robotic arm has been constructed by scientists at the Scuola Superiore Sant’Anna near the coast of Tuscany, Italy.

In order to grip things underwater, the tentacle has been constructed out of rubber and silicone wrapped around a steel cable mechanism. This construction technique will allow the arm(s) to squeeze into tight spots.

Lead researcher Cecillia Laschi states in the below video that “we designed this special braid which provides this flexibility but also the possibility to elongate the arm and shorten it. It has suckers that are very important in the animal for grasping……So we put our artificial tactile sensors under the suckers so that the robot can perceive contact when grasping objects.”

In addition to underwater operations, British surgeons want to adapt the technology for use in endoscopic surgery.

(via The Daily Mail)