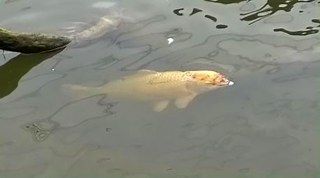 
Southern Daily Echo reported this amazing lost and found fish tale of a beloved koi named Chadwick finding its way back home after months on the lam.

Two fishes at Romsey World of Water (an retail center for aquariums, ponds and terrariums) were swept away by a big winter flood.  Steve the Sturgeon was found alive a few days after the flood in a puddle of water at a nearby car wash of all places, but Chadwick the Koi was no where to be found … until a woman walking her dog recently reported a friendly fish eating breadcrumbs from people’s hands at a local river.

Chagoi Kois are amongst the most personable pond fish, and it was Chadwick’s friendliness that ultimately saved him.  Staff from Romsey World of Water captured the koi ahd have returned him back into his pond.  Chadwick suffered a serious gash and damaged dorsal fin from his wild adventures.  After treatment from the staff, Chadwick is reportedly on the mend and doing well.