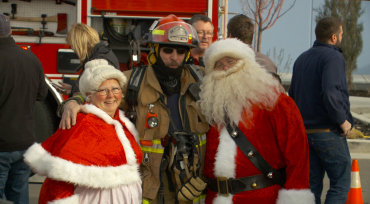 Santa and Ms. Claus took some time off from their very busy holiday season and helped battle an aquarium fire. Santa and Mrs.Claus were greeting children and checking out who had been naughty and nice at the Loveland Living Planet Aquarium in Draper, Utah over the weekend. The honored couple were at the aquarium as part of the ‘Festival of the Seas’ event. The event gave children an opportunity to have their picture taken with Mr. and Ms.Claus at the Mountain America Penguin Research Center, which features the aquariums resident Gentoo Penguins. Conveniently, Santa was also a Utah Fire Inspector.Unfortunately, a fire broke out in the aquarium’s kitchens. However, Santa and Mrs.Claus quickly sprung into action, helping direct children and guests out of the aquarium. Meanwhile, firefighters were on the scene putting out the fire. “We just helped walk everyone down. Clearing out the upper floor, with all the employees, and getting everybody out and safe,” Mrs. Claus told local news outlet KUTV. Luckily, no one visiting the aquarium was harmed. And all the aquariums aquatic residents, penguins included, were unharmed. The fire was put out quickly and the power remained on, so all of the animals retained the appropriate living conditions. The aquarium re-opened to the public on Monday. You can even check on how the penguins are doing on the aquarium’s penguin cam. MORE