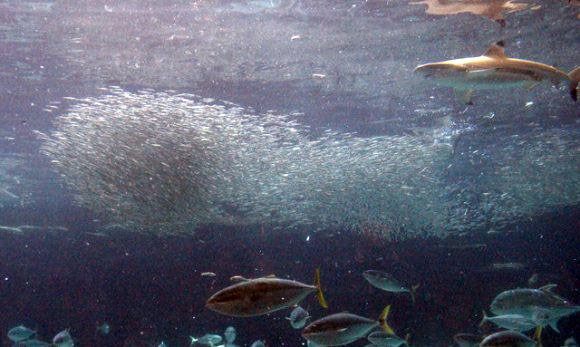 Prior to the introduction of sardines, aquarium officials fed the predators in the exhibit three times the normal amount in hopes of preventing a sardine massacre.  Judging by the photos, things didn’t go as planned.  The larger fish, bellies stuffed, still gorged themselves silly.

Another Japanese public aquarium, Nagoyako Aquarium, experienced the exact opposite problem.  Their sardines got way too comfortable in their habitat and started to break formation because the predators in their tank showed little interest in hunting them.  Nagoyako Aquarium officials went so far as to introduce 15 Pacific bluefin tuna in an attempt to scare their sardines back into a tight school.

Perhaps this is a teachable moment for all aquarists.  Plan your livestock in advance and introduce smaller, less aggressive species (fish and inverts alike) into the aquarium first.  Allow them to establish themselves in your tank before slowly introducing larger or more aggressive species.  Doing it in reverse order can result in a bloodbath not unlike the ill-fated sardines of Suma Aqualife Park.