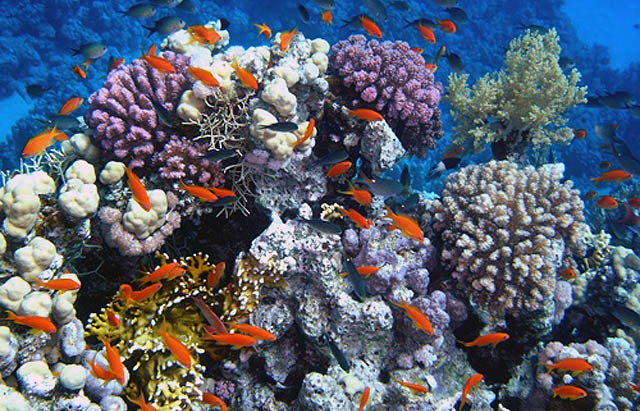 The “Assisted Evolution” (AE) strategy is comprised of four approaches:

The full proposal paper is published in Proceedings of the National Academy of Sciences.

The researchers recognize there are many questions that must be answered before “playing God” with coral reefs but believe Assisted Evolution has great potential to stave off reef decline.

From the Australia Institute of Marine Science

Scientists from the Australian Institute of Marine Science (AIMS) and the Hawaii Institute of Marine Biology are studying how Assisted Evolution (AE) may help some corals adapt better to climate change. Their research has been published today in the international peer-reviewed journal, Proceedings of the National Academy of Sciences (PNAS).

“Assisted evolution is the acceleration of naturally occurring evolutionary processes to enhance certain traits. Various AE approaches have been widely used for the improvement of commercial species, including crop species, wood trees and livestock. AE approaches include selective breeding and more recently, the manipulation of the microbial communities associated with plants and animals,” said AIMS scientist, Dr Madeleine van Oppen.

“We plan to evaluate the effectiveness and feasibility of four different AE approaches to enhance the environmental stress tolerance of reef-building corals. Over the past several years we have already done some pilot work in AE, however, our research is in the early stages,” Dr van Oppen explained.

The AE in coral concept was ‘spawned’ by decades of work by the two teams unravelling the mechanisms of adaptation and acclimatisation in corals, as well as a number of observations across the Indo-Pacific by other researchers showing corals have naturally adapted or acclimatised to areas with elevated temperature and that some corals have become more tolerant to bleaching* over successive bleaching events.

“Such observations indicate that under the right circumstances, acclimatisation or adaptation can occur over relatively short time scales. If we could promote and enhance this natural adaptive ability across several coral species then this could help increase reef resilience in the face of current and future climate change,” said Dr Ruth Gates from the University of Hawaii.

“This is important as the economic value of coral reefs through commercial and recreational fisheries, tourism, drug discovery, and coastal protection is immense,” Dr Gates added.

Van Oppen explained that the promotion of new resilient forms of coral raises important questions regarding the desirability of introducing these corals into the reef areas. In step with the development of AE techniques in corals over the next 5-10 years, van Oppen hopes there will be an open discussion with relevant scientific bodies, policy makers, coral reef managers and the general public on how these new options for enhancing reef resilience should be used.

“This will require careful ecological risk assessment together with a consideration of the ethical and socioeconomic implications,” concluded Dr van Oppen.

*Coral bleaching is a stress response manifested by the loss of the algae that live inside the coral’s tissues, leading to a paling of the coral as the coral’s skeleton becomes visible through its now translucent tissues.