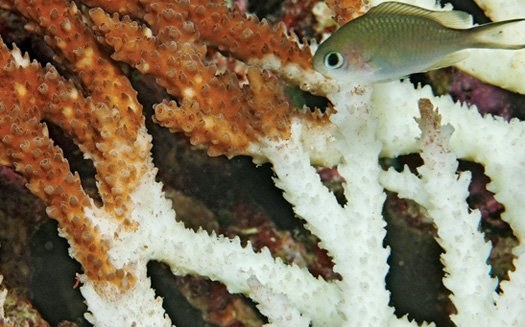 
Using viruses to fight bacteria, called phage therapy, isn’t anything new.  However, this practice has not been applied to coral research … until now.  Eugene Rosenberg, a microbiologist at Tel Aviv University, has set out to prove that we can use viruses to help protect corals from bleaching.

Scientists have observed some corals in the Red Sea and the Persian Gulf are resistant to bleaching. Rosenberg proposes that the presence of a different form of bacteria is why these corals are able to withstand temperature rises. He states: “Coral has thousands of bacterial species living within it, just as humans do.  These bacteria can help coral adapt to environmental changes.”

When water temperatures rise to 77º in the Red Sea, for instance, a nonresident species of bacteria called Vibrio coralliilyticus attacks the algae of some corals. But that same temperature spike may also trigger some of the corals’ bacteria to defend the algae, which could explain why certain corals aren’t susceptible to bleaching even at high temperatures.

So if the reason for some bleaching events is bacterial infections – and if corals who fight off these infectious bacteria are resistant to bleaching – then why not attempt to kill these bacteria to prevent bleaching?

Thus far, lab results have been positive: corals administered with bacteriophages have staved off bleaching, Furthermore, the bacteria-attacking viruses remain attached to the coral for up to two months, further protecting against bleaching.  Rosenberg plans field studies at the Red Sea and Great Barrier Reef this summer.  If all goes as expected, we could see large-scale application of this technique.  At four million bacteriophages per gallon, 13 gallons of solution could treat up to 30 miles of coral reef.

This concept could have direct ramifications for reefkeepers as well.  It would be possible to perform bacteriophage in-tank treatments or “dips” for newly introduced corals to combat such diseases as Rapid Tissue Necrosis (RTN).  A strain of Vibrio sp. is widely believed as the culprit for RTN.