Saving Florida’s Coral Reefs Must Be A Priority 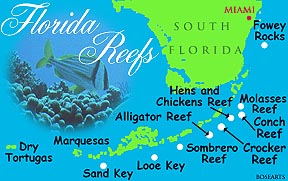 The National Marine Fisheries Services has released a Recovery Plan for South Florida’s Coral Reefs. The plan says it will take more than $250 million — and an astounding 400 years — to replenish the elkhorn and staghorn corals that have formed once-fabulous reefs off Florida’s coast and throughout the Caribbean.The Plan attempts to address the problems leading to reef decline, like coral bleaching, pollution,and rising temperatures. Ideas to aid in reconstruction of reefs includes ‘transplanting coral grown in nurseries, restocking sea urchins that clear algae from corals, improving sewage treatment and reducing the amount of fertilizer and other pollutants that reach the sea’.
“Although specifically written for elkhorn and staghorn corals, the recovery plan contains actions that will benefit coral reef ecosystems as a whole”, said Eileen Sobeck, Assistant Administrator for NOAA Fisheries. “There are many actions we can take at the local level to improve the ability of corals to cope with global threats. We can use lessons learned from this plan for recovery of the additional coral species recently listed as threatened under the Endangered Species Act” Now the actual support needs to follow from the government, scientists, the public and non-profit groups to make this plan a reality.  MORE