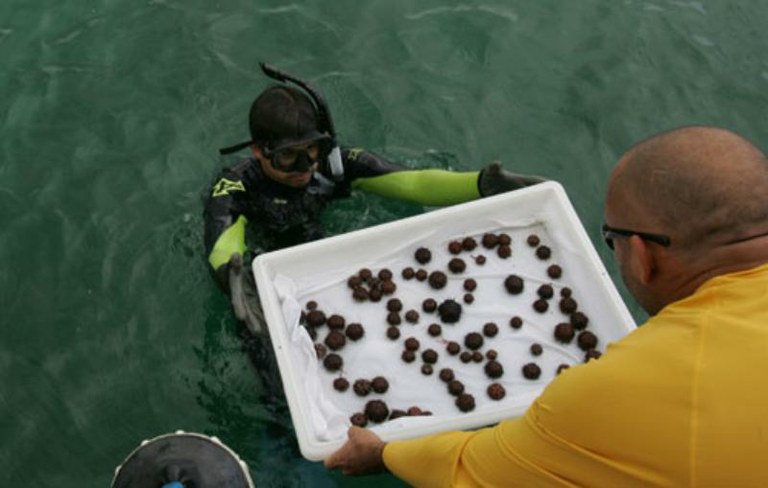 Divers getting ready to distribute the native collector urchins on the affected reef.


This is the first time that anyone has bred urchins successfully to combat a seaweed infestation in Hawaii.

Local biologists are hoping to stop the rapid spread of the non-native Kappaphycus alvarazeii and K. striatum seaweeds in the Kaneohe Bay by stocking the infested areas with local native collector urchins. Their current plans are to add an additional 10,000 to 25,000 urchins per month to the affected areas in hopes of getting it under control.

These two particular species of algae are particularly invasive as they can double in biomass in as little as 15 to 30 days.  Even more troublesome, both species can reproduce both sexually and vegetatively making them even harder to eradicate.

The unusually high stocking density of the urchins is required as they are naturally preyed upon by local pufferfish, octopi, and even humans (apparently they taste pretty good).  The Anuenue Fisheries Research Center, directed by David Cohen, plans to release another 20,000 by as soon as April.

Additional information on the invasive seaweed can be found here: http://www.hawaii.edu/reefalgae/invasive_algae/rhodo/kappaphycus_alvarezii.htm

Do we have any Hawaiian reefkeepers?  If so, what do you think about this method of combating an invasive algae?