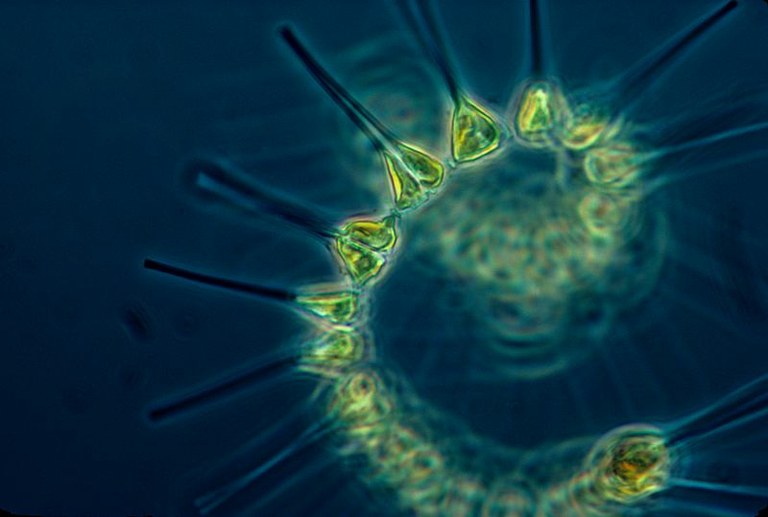 
Last month we covered how scientists found a previously unknown protein in phytoplankton that grabs essential but scarce Vitamin B12 from the water. This month, a team led by scientists at USC have uncovered zones of Vitamin B deficiency in the oceans using a new analytical technique.  Their research is published in the latest issue of The Proceedings of the National Academy of Sciences under the title “Multiple B-vitamin depletion in large areas of the coastal ocean.”  The article is an Open Access article meaning you can read the research in its entirety online for free.

“This is another twist to what limits life in the ocean,” said Sergio Sañudo-Wilhelmy, professor of biological and earth sciences at the USC Dornsife College of Letters, Arts and Sciences and lead author on a paper about the vitamin-depleted zones that will appear in Proceedings of the National Academy of Sciences on July 23.

B vitamins are organic compounds dissolved in the ocean and are important for living cells to function. Zones poor in B vitamins may inhibit the growth and proliferation of phytoplankton, which are tiny microorganisms at the base of the food chain in the ocean.

“An important result of our study is that the concentrations of the five major B vitamins vary independently and appear to have different sources and sink,” said co-author David Karl, professor of oceanography and director of the Center for Microbial Oceanography: Research and Education (C-MORE) at the University of Hawaii. “This could lead to complex interactions among populations of microbes, from symbiosis to intense competition.”

The team developed a new method of concentrating water samples and then analyzing them using a mass spectrometer, which identifies and measures the quantity of an unknown compound in a given sample by first ionizing and breaking-up the compound and then quantifying the fragmented ions or molecules produced. (Mass spectrometry is also used to identify steroid use in athletes’ urine samples.)

In their PNAS article, the researchers are sharing their technique with their colleagues around the world to help advance related research.

“The most important thing is that everyone with the right equipment can do it,” Sañudo-Wilhelmy said.

Next, Sañudo-Wilhelmy said he plans to investigate what causes varying amounts of B-vitamins in different regions of the ocean, and try to determine exactly how that affects phytoplankton blooms. This includes a comprehensive set of experiments in the North Pacific Ocean as part of C-MORE’s ongoing Hawaii Ocean Experiment.

Periodically, phytoplankton experience population explosions known as “blooms.” In the case of certain phytoplankton that produce toxins, these blooms become toxic, such as the so-called “red” tides. Temperature, sunlight and nutrients in the water all appear to influence these blooms, but the exact causes have yet to be pinned down. One hypothesis is that vitamins B7 and B12 may act as triggers.

“It’s crazy that after 100 years of study, we still don’t fully understand what controls different phytoplankton blooms in the ocean,” Sañudo-Wilhelmy said.