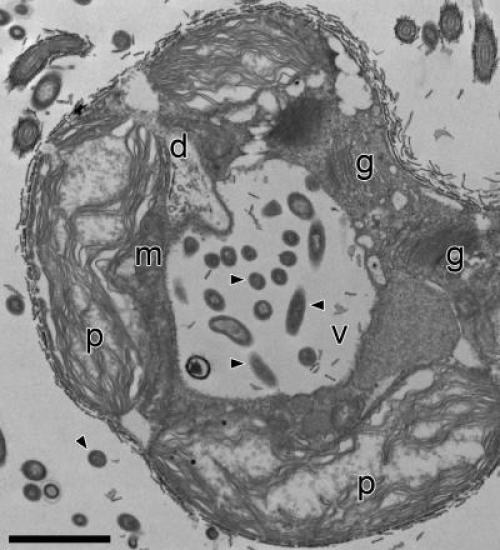 
From the American Museum of Natural History

A team of researchers has captured images of green alga consuming bacteria, offering a glimpse at how early organisms dating back more than 1 billion years may have acquired free-living photosynthetic cells. This acquisition is thought to have been a critical first step in the evolution of photosynthetic algae and land plants, which, in turn, contributed to the increase in oxygen levels in Earth’s atmosphere and ocean and provided one of the conditions necessary for animal evolution.

In a paper that appears in the June 17 issue of Current Biology and is available online today, researchers identify a mechanism by which a green alga that resembles early ancestors of the group engulfs bacteria, providing conclusive evidence for a process that had been proposed but not definitely shown.

“This behavior had previously been suggested but we had not had clear microscopic evidence until this study,” said Eunsoo Kim, assistant curator in the Museum’s Division of Invertebrate Zoology and corresponding author on the paper. “These results offer important clues to an evolutionary event that fundamentally changed the trajectory of the evolution of not just photosynthetic algae and land plants, but also animals.”

In green algae and land plants, photosynthesis, or the conversion of light into food, is carried out by a specialized cell structure known as a chloroplast. The origin of chloroplast is linked to endosymbiosis, a process in which a single-celled eukaryote — an organism whose cells contain a nucleus — captures a free-living photosynthetic cyanobacterium but does not digest it, allowing the photosynthetic cell to eventually evolve into a chloroplast. The specific feeding mechanisms for this process, however, have remained largely unknown until now.

In this study, researchers used transmission electron microscopy and feeding and staining experiments to take conclusive images showing how a basic green alga from the genus Cymbomonas feeds on bacteria. The alga draws bacterial cells into a tubular duct through a mouth-like opening and then transports these food particles into a large, acidic vacuole where digestion takes place. The complexity of this feeding system in photosynthetic modern alga suggests that this bacteria-feeding behavior, and the unique feeding apparatus to support it, descend from colorless ancestors of green algae and land plants and may have played important roles in the evolution of early photosynthetic eukaryotes, the precursors to plants like trees and shrubs that cover Earth today.

Eunsoo Kim joined the Museum in 2012 as curator of the protist collection, which includes algae, protozoa, and fungus-like protists. A native of South Korea, Kim received her Ph.D. in botany from the University of Wisconsin-Madison and conducted postdoctoral research at Dalhousie University in Halifax, Nova Scotia. She works closely with associate curator Susan Perkins and curator Rob DeSalle as part of one of the first natural history museum microbial research programs.

Shinichiro Mauyama, currently a postdoctoral researcher at the Division of Environmental Photobiology at the National Institute for Basic Biology in Okazaki, Japan, is a co-author on this paper. In addition to Kim’s laboratory at the Museum, this work was conducted in John Archibald’s laboratory at Dalhousie University. Funding was provided by the American Museum of Natural History and Japan Society for the Promotion of Science.