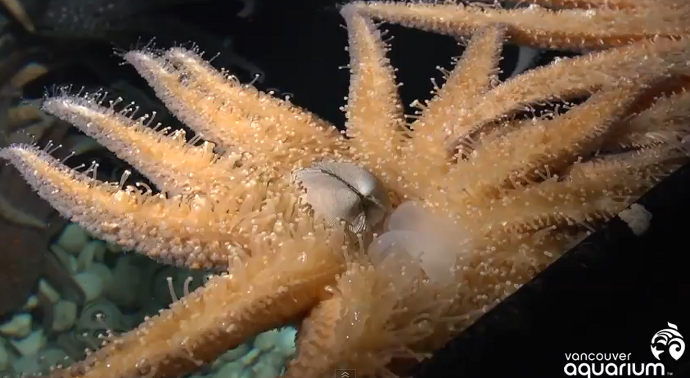 
A starfish feeds by first extending its stomach out of its mouth and over the digestible parts of its prey, such as mussels and clams. The prey tissue is partially digested externally before the soup-like “chowder” produced is drawn back into its 10 digestive glands.

The researchers at Queen Mary, University of London and the University of Warwick have discovered a neuropeptide – a molecule which carries signals between neurons – called NGFFYamide, which triggers the stomach to contract and retract back into the starfish.

The findings could have economic and environmental implications by providing a potential mechanism for controlling starfish predation.

Maurice Elphick, Professor of Physiology and Neuroscience at Queen Mary’s School of Biological and Chemical Sciences who led the research, said: “These findings open up the possibility of designing chemical-based strategies to control the feeding of starfish.

“Starfish predation has an economic impact as they feed on important shellfish, such as mussels and clams. Periodic increases in starfish populations can also cause major destruction to Pacific reef tracts, such as the Great Barrier Reef, as certain species feed on reef-building corals.”

The study, published today in The Journal of Experimental Biology, was carried out using computer analysis of DNA sequence data, chemical analysis of starfish nerves and pharmacological tests.

Professor Elphick added: “Interestingly, we have also found that the neuropeptide behind the stomach retraction is evolutionarily related to a neuropeptide that regulates anxiety and arousal in humans.”

The new findings build on previous work from the team at Queen Mary in which they identified neuropeptides called SALMFamides that trigger the relaxation and eversion of the starfish stomach.